Bemused by its own deceptions: a review of Tony Gilroy's Duplicity 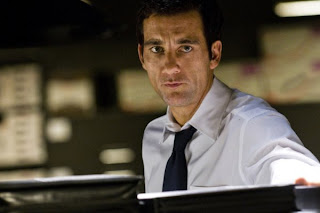 Even with its witty script, its detailed portrayal of corporate espionage, and the combined star power of Clive Owen and Julia Roberts, I was distinctively underwhelmed by writer/director Tony Gilroy's Duplicity.  I was surprised, too, because Gilroy's Michael Clayton still strikes me as one of the best films of 2007.  The former movie's blistering portrayal of a law firm and a corporation's willingness to cover up pesticide poisoning by any means necessary has a chilled loathsome air that seemed perfectly accurate.  Public relations can mask any kind of corporate skullduggery, even murder, and what better way to depict that corruption than from the jaded point of view of one law firm's "bagman" played with weary charm by George Clooney?
Duplicity also concerns corporate shenanigans, but this time Gilroy treats the subject in a much more playful way.  After Owen (Ray Koval) and Roberts (Claire Stenwick) meet for the first time in Dubai back in 2003, they jump into bed together, but then Claire drugs Ray and steals some sort of Egyptian defense code from his hotel room. The two corporate spies continue running into each other in exotic locales like Rome and London for the rest of the film, planning their ultimate swindle.  Their marks turn out to be two CEOs (Tom Wilkinson and Paul Giamatti) whom Gilroy depicts in the opening credits as they walk menacingly toward one another.  Eventually, the two start to fight in slow motion as their underlings look on aghast. As they roll around on the wet tarmac in their suits, the other executives rush in to tear them apart, and now we know about the ridiculous rivalry of these shampoo manufacturers.
Whereas Michael Clayton maintained a compellingly sinister air throughout, Duplicity treat its similar milieu in a lighter, more cartoonish way, relying on Owen and Roberts' verbal jousting to keep the audience engaged.  Later on, they set up the mechanism to steal the secret formula that can earn one company billions in profits, but they still can't quite trust each other due to their sneaky habits of mind. The film's screenplay has a jarring Memento-esque habit of jumping back in time three months here, one week there, two years, and so on, and we have to piece together all of the multiple game-playing and betrayals from this jagged timeline.
In the midst of all of these switchbacks and doublecrosses, I was irked by my boredom.  I have heard that Owen watched Cary Grant's rapid wordplay in His Girl Friday to prepare for the role, but Friday works in part due to the fun of watching Grant scramble to con his former wife into staying with him (not to mention the delightfully punchy world of 1940s newspaper journalism).  Both Owen and Roberts come off as a bit smug in comparison, and I really didn't care about whether the two stayed together or not.  I prefer the rougher-edged version of Owen in Children of Men, and Julia Roberts looks more complacent and motherly now that she's just had three children.  I found myself distracted by the tired expression on her face and the many panning shots of her walking through European city streets.  In comparison to her work in, say, Erin Brockovich, Roberts just seems to be hanging out in this film, and she can't quite disguise that her mind is somewhere else, even when she's in bed with Clive Owen.
Duplicity does have one last clever plot twist towards the end, but by then I had since resigned myself to idly staring at Roberts' awkwardly placed black eyeliner and her ski-slope nose. Perhaps it was the inherent problem of too many recognizable stars making a film less plausible, or perhaps it was just the lack of frisson between Owen and Roberts.  Maybe witty banter no longer suffices anymore.  Duplicity seemed ultimately too bemused by its own cleverness to involve me in its deceptions.
Labels: Duplicity

Anonymous said…
Excellent review. Good point about the problem with Roberts and other too recognizable actors.

Anonymous said…
I was bored stiff by this film (I saw this on Friday evening AFTER a screening of the nefarious KNOWING with Nicholas Cage, which was rather an abomination, but at least an 'entertaining abomination.' The 'corporate shenanigans are tedious, and I am never much a fan for Julia Roberts--she cheapens everything she appears in. I must say i am not the fan of MICHAEL CLAYTON that you are Film Dr., but you make excellent points of comparison, and the film has many fans.
I agree with you on the ineffectiveness of the 'cartoon' constription, as opposed to the sinister element that worked to M.C.'s advantage, and I must say (I know I'm being mischievious!) I loved that slow-motion Giamatti-Wilkinson fight (Wilkinson won) that opened the film.

You really got to this film's essence and related why it was such a bore. I looked over at my wife Lucille, at the half way point, and she was fast asleep! LOL!
March 22, 2009 at 3:48 PM

The Film Doctor said…
Thanks, Anonymous!

Thanks for comparing your analysis with mine. I still wonder if I was a bit harsh on the film, in part because as modern-day audience members, we increasingly have difficulty sitting through such a talk-oriented movie. I also wonder if the casting had been slightly different, whether the story would have worked much better.
March 22, 2009 at 4:45 PM

PIPER said…
I was really expecting something with this film. Something a bit more snarky. A little more fun. Maybe something like Out of Sight. Or Get Shorty. Or even Barbarians At The Gate. But like you, I was completely underwhelmed with this. And like you, I thought Michael Clayton was excellent.

And the opening slo-motion shot of Giamatti and Wilkinson was oh, so promising for something great.