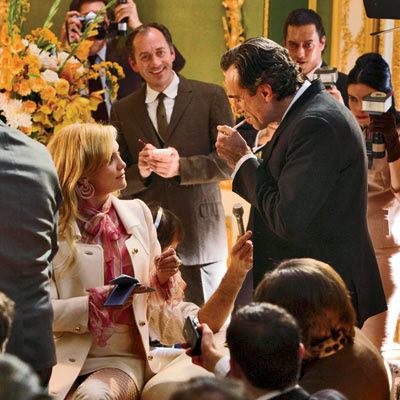 Don't Look Now is one of the scariest movies ever made with one of the most shocking endings ever.

As for "continuous partial attention" - it's certainly true according to my observations of my middle and high school students. It takes a lot to keep their attention focused - that's why I go for the loud, dramatic, very visual style of teaching. One of the major goals of my film history unit is to expand their movie-viewing patience (their style of movie-viewing always includes texting). But there is hope. I have seen their attention spans lengthen. And they come back reporting how they noticed backlighting or the use of an iris in a movie they went to over the weekend. Probably that was between text messages.
May 22, 2009 at 7:51 AM

I agree with you about the problems with teaching these days, mostly because there are so many new sophisticated forms of electronic distraction competing for their attention at all times. People increasingly text now while driving?!? In Rapt (which I recommend), Gallagher writes of how attention is a limited resource that can be squandered like any other. She recommends meditation as a way to regain the ability to concentrate.
May 23, 2009 at 7:50 AM

Richard Bellamy said…
The thing I liked most about last year's film Seven Pounds is that it is a very grim cautionary tale about the tragic consequences of texting on a BlackBerry while driving the fam.

My favorite high school texting anecdote: A couple of years ago I directed an adaptation of Tom Jones and the seniors in the audience were texting friends in the cast backstage during the performance, expressing their shock that it seemed that Tom Jones was making out with his mother while the cast members texted back, assuring them that Mrs. Waters was not his mother.
May 23, 2009 at 10:46 AM

The Film Doctor said…
That's funny. I've heard that students text each other 500, 600(?) a month at times? Also, there are the video game addicts who sometimes flunk out due to their 6 hour a day habit. Technological changes keep coming up with more elaborate little outlets for gaming, such as video games on calculators. Recently, the head of Google recommended in a graduation address for the students to get off their laptops (as I should get off of this one now).
May 24, 2009 at 9:20 AM

Sam Juliano said…
Thanks very much Film Drt., for the reference to Allan's excellent review of THE LEOPARD! Have a great Memorial Day weekend.
May 25, 2009 at 10:36 AM

The Film Doctor said…
My pleasure, Sam. I enjoyed Allan's post, although I find that I prefer the novel version of The Leopard by Giuseppe di Lampedusa even more than the movie (if one can say that in respectable film blogging circles).
May 25, 2009 at 4:27 PM