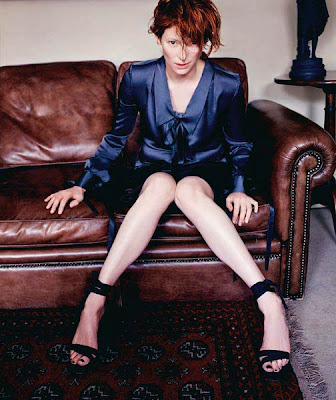 ---With the onset of the swine flu, I spent much of the last several weeks imagining myself in a 28 Days Later scenario.  To help us all in this anxious time, Den of Geek has informed us of the "10 Things Movies Teach Us About Virus Outbreaks":
"In case you haven't heard, we're all going to die. You, me, everyone we know, and possibly all our pets are all doomed to die from the latest in a long line of fatal pandemics, the swine flu. The experts are on TV every day relaying pant-soiling fact after pant-soiling fact about the upcoming apocalypse. I, for one, look forward to dying from swine flu, just like I died from bird flu in 2006 and SARS in 2003.
Fortunately for me, I'm prepared for the upcoming viruspalooza. You see, I've watched dozens of virus-related disaster films, and I am as well prepared as anyone to survive any virus outbreak. I know how viruses work, I know how to combat them, and I know what symptoms to look for when someone I know gets infected. In order to expedite the rebuilding of civilization after the fall, I'll pass those tips along to you, the Den Of Geek reader, so that we may unite as one and get the Internet running again as fast as possible once the outbreak has run its course."
---Film Blog of The Guardian shares some choice cameos in cinema.  I've always liked Charlton Heston's star turn in Waynes World 2.
---For those interested in learning how the occasional blogger makes serious money, check out this New York Times article about how "Bloggers Get the Book Deal":

" . . . the latest frenzy is over books that take the lazy, Tom Sawyer approach to authorship. The creators come up with a goofy or witty idea, put it up on a simple platform like Twitter and Tumblr, and wait for contributors to provide all of the content. The authors put their energy into publicizing the sites and compiling the best material.

Agents and publishing houses can’t get seem to get enough of these quickie humor books, which sell for $10 to $15 in gift shops and hip clothing stores likeUrban Outfitters as well as traditional bookstores. At least eight books created from user-generated content are due out this year, including “Love, Mom,” a just-published collection of embarrassing or funny electronic exchanges between mothers and their children."

---I always love it when the best actors say they don't know a thing about acting, such as, for instance, Tilda Swinton in this interview from IndieWire (hat-tip to Nathaniel of Film Experience Blog):

“There’s this endless disclaimer that I always feel I honestly have to give about not being an actor,” she said in all seriousness. “Because it really does feel most honest. I always feel that real actors are going to stand up and say ‘you’re a fraud! Confess it!’ And I want to be the first to say that I never pretended to be anything else. I always pretended to be a film fan first, and an artist’s model second. I’m in front of a camera, because I’m curious, and that’s about it. I don’t know one thing about acting.”

---Movieman of The Dancing Image found a nice quote from Francois Truffaut's Introduction to his book The Films of My Life:

"I felt a tremendous need to enter into the films. I sat closer and closer to the screen so I could shut out the theater. I passed up period films, war movies and Westerns because they were more difficult to identify with. That left mysteries and love stories. Unlike most moviegoers my own age, I didn't identify with the heroes, but with the underdog and, in general, with any character who was in the wrong. That's why Alfred Hitchcock's movies, devoted to fear, won me over from the start; and after Hitchcock, Jean Renoir whose work is directed toward understanding... "The terrible thing is that everyone has his own reasons" (La Regle du Jeu). The door was wide open, and I was ready for Jean Vigo, Jean Cocteau, Sacha Guitry, Orson Welles, Marcel Pagnol, Ernst Lubitsch, Charlie Chaplin, of course, and all the others who, without being immoral, "doubt the morality of others" (Hiroshima, mon amour)."

---Having discovered the formidable The Daily Dish recently, I like to think Barack Obama has been reading Andrew Sullivan's blog, especially his recent posts involving torture.  Why not?

---Erich Kuersten of Acidemic confesses his affection for Kim Morgan of Sunset Gun    as part of his Favorite Film Critics series:

"For me, nothing is more exciting--and occasionally upsetting--than discovering another writer who not only thinks as I do and writes similar to my style, but does it better, and started doing it earlier. The writers who inspired me originally--in high school have been absorbed and form my general approach: Robin Wood writing about Howard Hawks or horror films, Pauline Kael writing about Taxi Driver and Last Tango in Paris, Michael Weldon's Psychotronic Encyclopedia. The love these writers felt was palpable and strong. Manny Farber and James Agee were next for me, as manly men writers of the American abstract 1950s style, showing how criticism could sing with a poetry and zing that was almost macho, but Michael Atkinson, for example, I didn't even know what he was all about until a few months ago when I picked up his recommended "Dark Heart of Cinema". I'm kind of intimidated and shocked by how he got past me until now. More on him later...

Kim Morgan, however, is to me perhaps the best and most fearless of them all... and my favorite."

---Lastly, Bad Lit helps us adjust to living on the cheap with their "5 Great Documentaries for a Rough Economy."