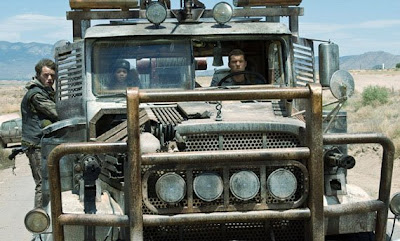 1) Visiting the cineplex yesterday was liking happening upon a seminar on America's love affair with the machine.
2) First, there were the trailers.  Michael Bay emphasizes the emotional sensitivity of his Transformers by having one visibly droop when Shia LeBeouf announces that he's leaving for college.  In Surrogates (due out in September), Bruce Willis inhabits a plausible future where everyone lies on their backs in their rooms as their surrogate robots head out into the real world to live for them.  The actual humans experience the sensory world of these surrogates through electrodes hooked up to their eyes, brains, etc.  Lastly, in an upcoming film called Gamer, people manipulate actual slaves into fighting battles for them in the ultimate reality/multiplayer online video game adventure.  And now, on to our feature, killer robots that rule the earth!
3) What is the message here? People are increasingly living vicariously through technology. They do this because the outside world is dangerous, so robots, slaves, and surrogates get to have all of the actual fun, take all of the risks. In Bruce Willis' case, he only really starts to live once he rejects the surrogate system, and leaves his apartment. So where does leave us, sitting in the cineplex?  Still tied to the simulacra of the machine-filled machine, living out surrogate adventures.
4) I was still surprised by how much I liked much of the first two-thirds of Terminator Salvation.  I read in Entertainment Weekly that the film's director McG is trying to transform himself into James Cameron, the original director of the original (and still the best) Terminator.  With his comical fast food name and history as a successful but otherwise derided director of the Charlie's Angels franchise, McG badly wants uber-masculine action film cred, so he begins this film with macho Marcus Wright (the relatively unknown Sam Worthington) signing off his corpse for scientific purposes before getting executed by lethal injection for killing several people back in 2003.  Later, after some medical work on his body, he wakes up in a post-apocalyptic Los Angeles in 2018 where a small army of resistance fighters wage war on a world-dominating cabal of evil machines known as Skynet.  In his quiet, understated way, Marcus is quite equal to the occasion, fixing an old jeep and a radio, eventually deciding to take on Skynet practically by himself.  He is likably mellow.  What would give a character more street cred than being executed on death row and then returning to life?
5) As the semi-mythical hero John Connor, Christian Bale fights his way into some bunker with caged humans and a terminator production line before discovering his entire squad has been wiped out.  Soon after, Connor hops on to a helicopter, flies up, and then loses control of the copter before crashing upside down (all in one shot).  Bale spends the entire film looking intense and heroic, so I was relieved when the action shifted back to the more relaxed Marcus.
6) Meanwhile, in scenes reminiscent of The Road Warrior, Marcus meets up with a teenage Kyle Reese (Anton Yelchin) who happens to be John Connor's father due to the mysteries of time travel.  Also, Marcus finds a post-apocalyptic child named Star (Jadagrace), who struck me as a blend between the feral child of The Road Warrior and Jaden Smith.  Marcus, Kyle, and Star struggle to elude all kinds of complicated robots including some fun terminator-motorcycle-bots, flying frisbee-bots, and once especially large robot that towers over a defunct gas station and blows up fleeing humans in my favorite scene in the film.
7) As our heroic band of warriors work their way towards getting captured inside a flying Skynet cattle car (some of them, anyway), Terminator Salvation begs the question.  Where is all this weaponry coming from?  Was it all lying around after the nuclear holocaust?  Who takes care of the mechanical upkeep of all these elaborate Skynet machines?  I guess the robots take care of themselves?  Who supplies all of the resources to keep all of this gleaming machinery going?
8) Also, why are there multiple fires burning in all night scenes, especially when they can attract Skynet attention?
9) [Slight spoiler alert] Soon enough, it turns out that Marcus is, unbeknownst to himself, manufactured out a hybrid nervous and robot system, making him something of a special Toyota Prius model of the terminator line.  Marcus also has a human heart, so he's not happy to learn of his metallic innards.  Having a fondness for crucifiction imagery, McG has Marcus hang from his arms while tied to a metal pole as John Connor looks on in disgust.  How can John trust a man who could be programmed to kill the rebel insurgents?
10) By the time the film boils down to the usual climactic battle between good and evil in the enemy stronghold (see X-Men Origins: Wolverine), things get bombastic, melodramatic, and silly. After much metal-crunching and robotic action, Terminator Salvation dutifully stresses how the human heart makes people superior to machines, but, as usual with this franchise, the terminators' relentless drive to kill makes them more fun to watch.
Labels: Terminator Salvation

Richard Bellamy said…
Terminator Salvation satisfied that need you have sometimes for explosions, machinery, and noise - but I was hoping for Terminator Culmination and only got the promise of many sequels to come. The gas station scene was fun - some nice shots from above - but the chase was right out of Mad Max.

Actually, I was more intrigued by the preview for Surrogate. I'm wondering how all that sensory experience stuff works. That could be kind of fun. Although maybe not as fun as an android (or was it a clone?) playmate like in the Schwarzenegger film The 6th Day. Too bad, as always, that the preview shows too much. Now we know that the film turns into I Am Legend when all the surrogates collapse and leave Bruce Willis all alone.
May 23, 2009 at 3:27 PM

It seemed natural to me that McG kept open the possibility of sequels. That was probably a business decision of the studio. I can tell that many reviewers did not care much for the campy aspects of Terminator Salvation, but I found it fun in an ironic way. I also had the same awkwardly positive reaction to Resident Evil: Extinction.

I agree with you about The Surrogate, although all of the people falling over reminded me more of The Happening. The Surrogate struck me as grimly accurate about our present condition.
May 23, 2009 at 6:13 PM

It always seemed to me that the Terminator franchise was the logical progression from the world Frank Zappa described in the Joe's Garage series. Our mechanical fetishes eventually learn enough about us to become disgusted and seek a more permanent and deadly dominant relationship with the messy meat bags called H. Sapiens.

If Zappa were alive now, it would be interesting to see a mash-up of the Terminator series with the Central Scrutinizer narrating things over a funky music track.

I agree. Perhaps the Terminator franchise succeeds because it conveys a sneaking sympathy for machines--the cyborgs tend to be most charismatic because they just don't care. It's one way to deal with human over-population.
May 26, 2009 at 5:34 AM