"That is when the world will end": the destructive revelations of Donnie Darko (2001) 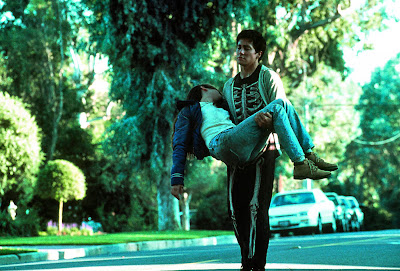 Ibetolis, of Film for the Soul, has once again graciously allowed me to guest-write a post as part of his Counting Down the Zeros series, this time concerning Richard Kelly's 2001 cult film Donnie Darko (one of my all-time favorites). Here's the link.
And here's the post:
I like to think movies, like any work of art, can have genuine prophetic power.  Fritz Lang’s Metropolis (1927) foresees a day in the future when all of the civilization’s energy runs out.  The Mad Max vision of  the future still seems pleasantly plausible, and zombie films may prefigure a time when the over-populated living, not the undead, take to the streets starving and resorting to cannibalism.  This same prophetic, visionary quality is what makes Donnie Darko (2001) so compelling.

After an awkward period in 2001 when distributors didn’t know how to promote Richard  Kelly’s Donnie Darko (Is it a John Hughes-esque suburban teen film, science fiction, a superhero film, or what?), the film had a limited release one month after 9/11.  Talk about prophetic: the movie depicts a jet engine freakishly falling from the sky and nearly killing Darko in his bedroom, and then it gets released right after actual jets crash into the World Trade Center.  Later, the director’s cut DVD version of the film became extremely popular, and now Darko enjoys cult status.  Why does it succeed so well in capturing the imagination of its viewers?

For one thing, unlike most movies, Donnie Darko remains very much open to interpretation.  Somewhat like Synechdoche, New York, Darko has many loose ends, and a highly ambiguous conclusion, but many of  Donnie’s visions and actions gain coherency as the film goes on, giving both Donnie and the viewer a sense of fait accompli and deja vu.  Just before midnight, a six-foot bunny rabbit named Frank guides the sleepwalking Donnie outside and tells him that the world will end in “28 days, 6 hours, 42 minutes, and 12 seconds.” Then, a jet engine falls out of nowhere into Donnie’s room.  Frank has therefore saved Donnie’s life, and he goes on to speak to Donnie as a voice in his head.  He tells Donnie to “Pay attention.  You may miss something,” when Donnie watches a crappy “Lifeline exercise” video in gym class.  Later, he guides Donnie to bust a water main in his school, thus flooding the building with sewage.  And he persuades Donnie to set a man’s house on fire while his girlfriend Gretchen sleeps during a showing of The Evil Dead at the local movie theater.  In his way, Donnie gets to act out the vengeful fantasies of his classmates, but at first he doesn’t know why he’s doing it, nor does he know what his visions of Frank mean.

On one level, the film suggests that Donnie’s erratic aggressive behavior is a symptom of his paranoid schizophrenia.  On another level, Donnie may be a superhero, a “living receiver” Christ figure apocalyptic seer who learns time travel in 1988.  Somehow, Kelly manages to keep both interpretations plausible, and he does it by allowing the viewer to partake in Darko’s visions, and therefore make the same connections as he does.

For instance, why does Donnie break open the water main?  So he can become Gretchen Ross’s (Jena Malone’s) boyfriend, which gives him motivation to try to save her life later.  Why does Donnie burn down Jim Cunningham’s house?  So he can expose the motivational speaker as a pervert who owns a kiddie porn dungeon in his home.  Thus does Kelly equate destruction with revelation and creation.  Jake Gyllenhaal broods and looks tormented in his dweeby Opie t-shirt, but Donnie’s smarter than anyone else, and he takes pleasure in subverting the adult power structure when he can.  Frank’s cosmic plan gives Donnie the freedom to revolt extravagantly, but there’s always the suggestion that reality may intrude on his whimsical behavior.

In terms of technique, Donnie Darko uses image patterns, music, parallel editing, and innovative casting brilliantly.  The film is virtual storehouse of high-level cinematic references, so that the film-loving viewer can tease another level of allusion beyond the prophetic one.  For instance, Kelly shows his love for Hitchcock by including a close variation on the staircase and chandelier of Notorious (not to mention the Duran Duran song “Notorious” that Sparkle Motion dances to).  Kelly finds a way to reference the cellar and the knife-play of Psycho, and the high school bully likes to wield a large knife when he’s not mimicking Psycho’s high-pitched violins in class.  Kelly also shows his love of The Graduate by having Donnie’s mother ask “Where do you go at night?” just as Ben’s mother does, and by casting Katherine Ross, of all people, to poignantly play Donnie’s shrink.  To augment the creative casting of Drew Barrymore as the iconoclastic English teacher, Kelly inserts a visual nod to E.T. when the kids head out to Grandma Death’s cellar on their bicycles at night.  The film is full of creative image patterns.  Frank , a kind of Alice in Wonderland white rabbit guiding Donnie into his own rabbit hole, finds literary parallels in Richard Adams’ Watership Down, where one of the rabbits has prophetic visions of their warren getting wiped out.  Kelly even finds ways to equate crappy camera technique with evil when he shows us Jim Cunningham’s cheesy motivational videotapes with ghastly testimonials about bedwetting and a boom microphone clearly in display in one scene.

Ultimately,  Donnie Darko succeeds because it builts to such a strong emotional kick at the end in spite of all of the ambiguities of the film.  Even though one cannot know fully what just happened, the movie still feels complete--a puzzle, yet an artistic whole.  When Gretchen waves at Donnie’s mother, some communication has just taken place.  Donnie Darko leaves it up to us to decipher why it works so well.

Suffice it to say that I’ve taken Donnie Darko apart multiple times, and I’m still finding patterns and mysteries in it.  For instance, why does Cherita Chen keep appearing as a witness in a sitting position during key moments in the movie.  Who is the fat guy looking on when Donnie wants to kiss Gretchen?  (Kelly suggests that he’s an FAA official monitoring the family.)  Why is Donnie smiling and laughing at the beginning and end of the film?  Why is there a spiral on the jet engine, to perhaps suggest the circular return of that image of the end of the movie?  What are we to make of all the theories built into Roberta Sparrow’s The Philosophy of Time Travel?  Somehow, by mixing the Book of Revelations with Back to the Future, Kelly retrofitted the banal elements of a John Hughes teen comedy into a souped-up Delorean DMC-12 of a film, the ever-suggestive Donnie Darko.

It seems to me that the choice of snack-food one chooses when watching such a film is important. On your post, I suggested a few, but now I'm wondering if in fact one shouldn't fast before and during the viewing?
May 6, 2009 at 8:41 AM

The Film Doctor said…
Fasting seems slightly overly religious as a response. I recommend that you snack on broiled rabbit stew, perhaps? How about Halloween candy and pizza (as in the first scene)? Airline snacks? Hard liquor may help with the hallucinatory weirdness of the movie.
May 6, 2009 at 6:23 PM