When cool turns to complacent: notes on Ocean's Thirteen (June 8, 2007) 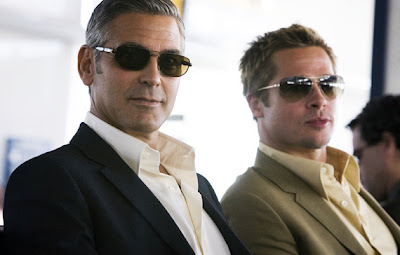 Note: with all of the talk of Soderbergh's The Girlfriend Experience in the blogosphere, I thought that perhaps this of-the-period review of Ocean's Thirteen might be of interest.

Back in 1960, Frank Sinatra and his rat pack pals starred in a whimsical Las Vegas heist film called Ocean's 11. Now, in a summer remarkably lacking in new ideas, Warner Brothers brings us Ocean's 13, the sequel to the sequel of the remake of Ocean's 11, all of which star George Clooney (Danny Ocean) and Brad Pitt (Rusty Ryan).

Since the heist genre assures its audience an evening of wit, close shaves, and clever contrivances, this film has its points. For one thing, it does not cater to a teenage audience, and it relies on verbal sparring and flashy Las Vegas set designs instead of the usual computer generated special effects. Directed by the capable Steven Soderbergh, who makes money with the Ocean series so he can explore more artistic material in other films such as Bubble and Traffic, Ocean's 13 relies upon the charm of its well-dressed leads, the difficulty of its capers, the gee-whiz technology of its devices, and the fun of a bunch of handsome con men getting away with stuff. But overall, I found the film static, complacent, and almost bored with its conventions. Beyond Clooney's easy grin, the plot lacks urgency, so there's a weird inertia for much of the movie.

Perhaps part of the problem lies with the premise. Reuben Tishkoff (Elliot gould) expects to be Willie Bank's (Al Pacino's) partner in the opening of a new casino/hotel, but Willie muscles in and takes over the whole establishment, leaving Reuben to suffer a heart attack on the worksite of the new building. As Reuben lingers in a depressive funk in bed, Ocean calls in the gang to wreak revenge on Bank. While they used to rob for profit, now they mess with Bank out of humanitarian concern for Reuben, and this adds to the film's self-congratulatory air.

With bronzed skin and slightly bugged out eyes behind ghastly designer frames, Al Pacino suggests more than embodies the gangster menace of his prototypical roles in Scarface and The Godfather series, and I was saddened by the way he has aged onscreen. Ocean's 13 refers to the original The Godfather multiple times, both with casting (James Caan's son Scott stars as one of the 13), and with snippets of dialogue lifted from the classic film, but all of the allusions just reminded me of how Pacino has become a cartoon version of his former self.

In The Godfather, his character has to wrestle between family loyalty and his own war-hero ethics. In this new film, Pacino plays a boorish Trump-like figure obsessed with having his hotel earn yet another Five Diamond Award. His business rapaciousness is comically undermined by a desire to please his high roller clients, but there's never much doubt about who will succeed as the 13 take on the big grand opening of the casino.

So, without anything else to keep me involved, I found myself wondering about what kind of shiny bronze suit Brad Pitt will wear next, or why Matt Damon dressed up like James Bond's Dr. No (complete with a hook nose) to comically seduce poor Ellen Barkin.

For those of you who would like to see a casino hand out money for a change, the climax does give some pleasure. Also, the devilish 13 find all kinds of humorous and creative ways to make the hotel inspector's experience the worst possible visit with bed bugs, foul smells, and restaurant food that makes him vomit after dinner. But as Pitt nibbles on oriental dumplings and strategizes with Clooney, they both seem to be marking time before taking on their next more challenging role. Even as the 13 applaud themselves for their "style, brio, and loyalty," there's a point where looking cool starts to resemble nothing more than boredom.
Labels: Ocean's Thirteen

Unknown said…
I guess I enjoyed this film more than you did. It was a fun, entertaining romp - no more, no less and a a nice way to end of the series. I actually liked Pacino in this one and he, along with everyone else, looked like they were having a blast. Of course, this doesn't always translate into the audience having a good time as well but I dug it... cotton candy for the mind.
May 28, 2009 at 4:39 PM

It sounds like you appreciated the movie more in the spirit in which it was made than I did. I was bothered by the all of the name actors detracting from any plausibility in the storyline, the cynicism of its crowd-pleaser aesthetic, and the lack of a driving plot. I tend to have mood swings of revulsion while watching films like this--it's hard to explain.
May 29, 2009 at 10:31 AM

Unknown said…
Heh. Ah, no sweat. I completely understand where you're coming from. Normally, I'm into those kinds of films either but I have a soft spot for Soderbergh and even his popcorn movies I enjoy. Plus, David Holmes score is just so damn good -- I've enjoyed every Soderbergh film he's worked on, esp. OUT OF SIGHT which has a killer soundtrack.
May 29, 2009 at 2:27 PM

filmgeek said…
I loved Ocean's Eleven but was somethat disappointed with Ocean's Twelve. I started watching Ocean's 13 out of curiosity one afternoon and had to switch it off after about 10-15 minutes because I thought it wasn't worth getting into. I was bored before it even really got going
May 30, 2009 at 6:29 AM

There are times when I feel trapped in the theater, and my despair at having to endure the rest of the movie causes me to stare at the exit signs over the doors. The images on screen take on abstract qualities--my mind wanders--and the review subsequently sounds like the fancies of a prisoner. I wonder how much reviewing boils down to just exasperation and heightened sensitivity.
May 30, 2009 at 7:22 AM