Beefcake for the career woman: The Proposal 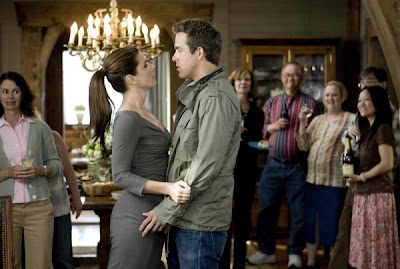 Increasingly, I get the feeling that everything boils down to marketing. The hotel you visit, the school you attend, and the movie you watch is in the business of selling you prepackaged special moments in your life that cheerfully reinforce your assumptions instead of challenging them. Every day, market research gets more sophisticated to the point where I wouldn't be surprised that eventually old age and death will become a winsome, warm, and simulated experience (like a visit to Cracker Barrel) where the only hitch will be the obligation to fill out a "How are we doing?" quality control questionnaire on the way to the funeral home.
I especially get this feeling while watching romantic comedies, because these films are clearly not marketed toward me. The Proposal seems constructed with older women in mind, and it's selling the fantasy that frigid, overworked, career women nearly beyond child-bearing age (that's the movie's stereotype, not mine) can somehow share a bedroom with unthreatening beefcake Ryan Reynolds. The film also sells several other shopworn conceits like these:
1) Homespun middle-American family life is superior to living alone and ambitious in the city (as in Sweet Home Alabama and The Family Stone).
2) While basically tragic, old people can at least be funny in the same way as small white fluffy dogs can be.
3) It's better to live with the trappings of the rich just as long as you condemn class snobbery that looks down on the poor.
4) A single professional woman had better learn all of this homespun malarkey or she will face misery and isolation as a highly-paid CEO.
Regardless, director Anne Fletcher (who also directed 27 Dresses) generally does an excellent job with The Proposal. As written by Pete Chiarelli, the movie is engaging with several very funny set-piece scenes. I was especially impressed with how well-lit Ryan and Sandra are much of the time; the cinematography sparkles and the dialogue moves at a fast clip.
As in the case of 27 Dresses, The Proposal never hesitates to steal ideas from other movies. The film begins with Reynolds' character (Andrew Paxton) cursing because his alarm clock lost power in the middle of the night. As he rushes out of his apartment, one can think of the beginning of Four Weddings and a Funeral that has a similar hook. At the New York publishing house where Margaret Tate (Bullock) works as a high-powered editor, she strikes fear into everyone's heart just before she arrives, just as Meryl Streep's character did in The Devil Wears Prada. Bullock completely lacks the gravitas of Miranda Priestley, which doesn't seem to matter because she's going to change anyway. Lastly, in his hurry to get ball-busting Margaret her coffee, Andrew manages to spill it all over his white shirt, a catchy early scene stolen from Tina Fey's similar mishap at the beginning of Mean Girls.
It turns out that Tate, a Canadian, had better do something quick or be deported to Canada for a year. She stumbles upon the idea of having her hen-pecked assistant Andrew marry her. When he tries to resist, she blackmails him by threatening him with losing his job. When it turns out that he could go to jail for five years if they get caught having a fraudulent marriage, Andrew obliges her to kneel down on a crowded city sidewalk (not very easy in her long, tight skirt and high heels) and propose to him. For a moment, Andrew gets the upper hand in their power games, and the next thing you know, they fly off to his family in Sitka, Alaska to attend his grandmother Annie's (Betty White's) 90th birthday party.
Sitka proves to be a sun-kissed romantic comedy fantasyland with swooning mountain vistas, waterfront property, and charming frontier shopfronts that would make Sarah Palin proud. In front of his family, Andrew and Margaret humorously contrive various ways to look like they are in love. When he touches her rear, Margaret mutters under her breath "Get your hand off my ass or I will cut your balls off in your sleep." They laugh, share tender moments, deal with a yapping dog, and bump into each other naked. Mischievous, eager, smiling, and a little lecherous, Betty White steals every scene as if her advanced age allowed her to overact her head off. As a demented white-haired homunculus, she can be hilarious, although the contrived winsomeness of her performance got to be a bit too much of a good thing after awhile.
Does Andrew get to resolve his problems with his domineering father? Does Margaret soften under the balm of family togetherness? As the film reaches its third act, one can quibble about plausibility, but that doesn't matter so long as Ryan Reynolds and his six-pack abs gets served to the targeted audience like meat on a platter.
Labels: The Proposal

bowler said…
i think Reynolds and Bullock did they best they could have done with a generally predictable storyline... they made it worth watching
June 21, 2009 at 7:12 PM

Sam Juliano said…
Film Dr.: While my wife and two daughters went to see this yesterday afternoon, I opted to head across the hall with my three sons to see THE TAKING OF PELHAM 1-2-3, but predictably my oldest daughter Melanie (age 13) says she really liked this film. And your summary argument here (again deleniated most engagingly step-by-step) that this film is derivative is no doubt dead-on.......but shhhhhhh, I must keep silent!
June 21, 2009 at 8:44 PM

I agree, although at times I found it hard to tell what was going on Reynold's character's head. As written, Andrew makes less sense later on.

Also Margaret is never all that convincing as the evil power-wielding editor, but Bullock conveys her change of heart well. She chooses good vehicles, produces them, and I think she's mostly effective at playing recognizably human, likable characters.

There's now a whole subcategory of romantic comedies that rip off The Devil Wears Prada. Kristin Scott Thomas tries to mimic Miranda Priestly in Confessions of a Shopaholic with similarly underwhelming results.

Anne Fletcher's 27 Dresses is a veritable compendium of wedding movie references. Watching that film was like studying the entire history of endless layered romantic comedy cliches.
June 22, 2009 at 11:28 AM

Samantha said…
I also really enjoyed this movie and am not embarrassed to say that I am a man. I have always enjoyed watching all of the Sandra Bullock movies out there and this one is worth watching over and over, Reynolds is also good on the big screen.
July 21, 2011 at 5:20 PM

Monica said…
I just love all Sandra Bullock movies and this one was a really good one, it caught me off guard when it came out because I wasn't expecting it, lol
July 21, 2011 at 5:23 PM