In its crude, drunken way, The Hangover is a subversive treat for guys. The storyline is simple: four men enjoy a decadent bachelor party one night in Las Vegas, but when the next morning comes around, none of them remember what happened the night before, and the groom-to-be Doug (Justin Bartha) is missing (not to mention there's also a mysterious tiger in the bathroom, the wreckage of their Caesars Palace villa, the stolen police car, and the fact that Stu (Ed Helms) seems to have gotten married to a stripper played by Heather Graham).
Probably many viewers caught the reference to Rain Man in the scene where the goofy Alan Garner (Zach Galifianakis) suddenly and unrealistically acquires the ability to count cards, because the image of him descending the escalator with Phil Wenneck (Bradley Cooper), 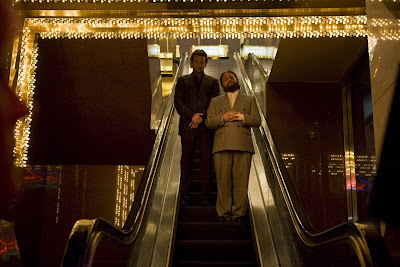 directly alludes to a similar moment with Dustin Hoffman and Tom Cruise in Rain Man (1988):

But you have to go all the way back to 1938 and Howard Hawks' Bringing Up Baby to find the model for the dentist Stu Price (Ed Helms) and his emasculating girlfriend Melissa (Rachael Harris):

At the beginning of Hangover, Melissa undermines Stu by making sure he brings Rogaine for his hair on his trip. Stu is so fearful of Melissa, he tells her that he's going to Napa Valley for a wine-tasting convention instead of to Las Vegas. Much of the dramatic arc of The Hangover consists of Stu gradually learning to get over this controlling woman. Similarly, in Bringing Up Baby, the film begins with paleontologist Dr. David Huxley learning from his fiancee that they will not have "time" to have a honeymoon, and they cannot have any "domestic entanglements of any kind." As Stu and David learn to find their masculinity through a journey, in both cases a wild animal plays a role.
In Bringing Up Baby, Katherine Hepburn brings along a leopard: 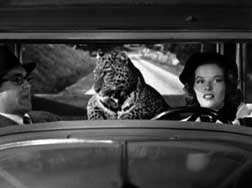 And in The Hangover, Stu deals with a tiger in much the same fashion:

At other times, I wondered--was this scene, 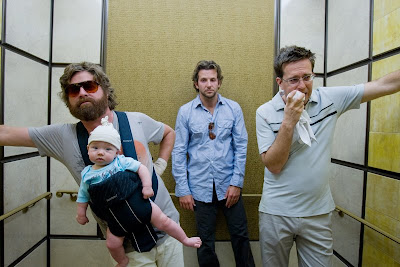 referring to 1983's 3 Men and a Baby? In both films, circumstances force three inept guys to take care of a stranded baby: 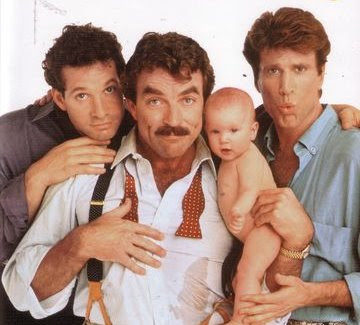 And then there's the family resemblance between The Hangover, 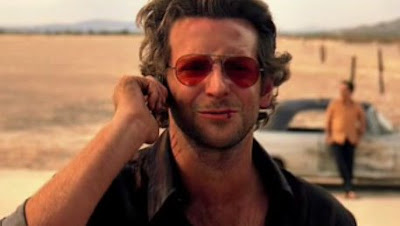 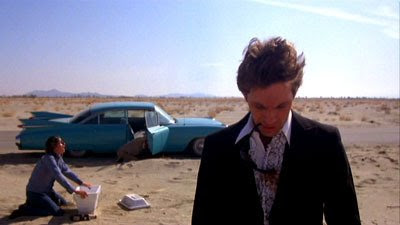 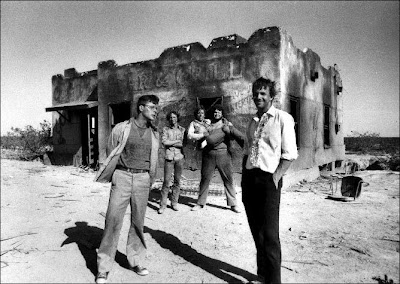 Phil eventually also finds his masculinity by jumping out of a plane. Curiously, both films include a bearded pudgy goofball amongst the characters.

Several of the desert scenes in The Hangover reminded me strongly of Fandango: 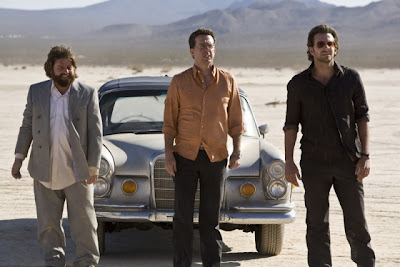 Doug, the fiance, gets the keys to a gorgeous mint-condition '69 silver Mercedes convertible for his wife-to-be's rich father, who gives it to him with the condition that only he will drive it. This whole source of anxiety brings to mind a similarly threatened red Ferrari in Ferris Bueller's Day Off:

Not to mention Dude, Where's My Car (2000) and Fear and Loathing in Las Vegas (1998) as mentioned in Adam's Rosenberg's post on The Mtv Blog.
So, what have we learned?
In terms of women in movies who help men regain their masculinity, we have moved from this, 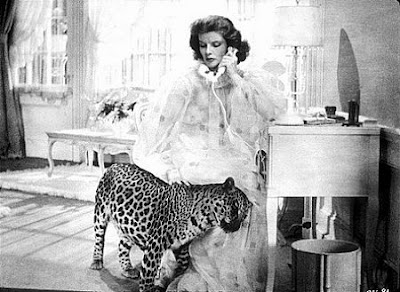 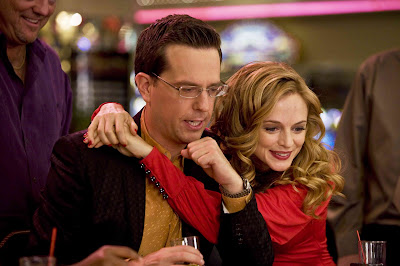 And even though Heather Graham's character has no particular reason to fall for Stu, she can still use the career boost of appearing in this year's sleeper summer hit The Hangover.
Labels: The Hangover

BeaufortBay said…
Speaking of movie allusions, wasn't there a frightening bachelor party movie in which a group of men in a setting like a Vegas hotel who by accident murder a hooker they have hired, in their bathroom, then have to hide the murder as best they can?

You are right. I should have included Peter Berg's Very Bad Things as part of The Hangover's cinematic heritage. I just don't know that film as well.
June 12, 2009 at 7:54 AM

Invisible Woman said…
I don't care if this movie alluded to/stole from every movie ever made--it was freakin' hilarious!:-)

Richard Bellamy said…
I enjoyed your post here - with your comparative images - much more than the movie, which I saw last night with my son, who loves Superbad and most other raunchy movies. A lot of people were laughing. We were not. The situations seemed like they SHOULD be funny, but they just didn't hit us. When they descend the escalator, I thought of Rain Man and your post and I laughed for that reason.
June 20, 2009 at 12:10 PM

I've noticed that many critics have slammed The Hangover while audiences tend to like it. I liked some of the subversive male revolt aspects of the film and the basic plot device of leaving it up to our imaginations as to what happened that night. The chicken, for instance, is never explained. Otherwise, I wouldn't want to defend the film excessively. I've noticed, too, that comedy is one of the easiest genres to pan (I've done my share) without really having to prove much of anything. One finds it funny or not. Also, Heather Graham's role showed how much her stock has dropped in Hollywood recently, and I was surprised.
June 20, 2009 at 2:37 PM

Chuck said…
Don't know if the elevator shot was a specific reference to Three Men and a Baby but they do, of course, talk about the film at one point (and amusingly enough can't even remember Steve Gutenberg's name).
June 20, 2009 at 6:12 PM

The Film Doctor said…
Thanks for the correction, Anonymous. The IMDB page on Fandango lists the period of the film as circa 1971.
October 10, 2009 at 8:02 PM

Anonymous said…
It's not a big problem.. The thing is this movie rocks. I love Alan, stu, phill, and the missing guy. I forget his name ;)