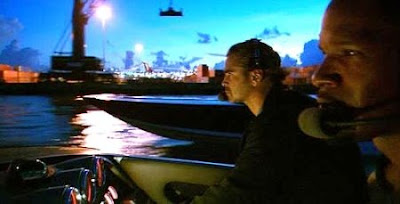 [In honor of Michael Mann's much anticipated Public Enemies to be released this Wednesday and Michael Mann week at Radiator Heaven, here's my of-the-period review of Miami Vice (2006)]
What could be more fun than working for the vice squad? You get to slouch around like a hoodlum, penetrate underworld organizations, and drive Ferraris while wearing designer shades, flashy suits, and beard stubble. In Miami Vice, being on the vice squad means spending plenty of time on your cell phone, driving speed boats, and posing against dramatic cityscape backdrops.
Director, writer, and producer Michael Mann has always conveyed a sense of style in his movies, many of them very good. I liked his early film Thief, and his recent movie Collateral even made Tom Cruise look plausibly vicious. With Miami Vice, though Mann attempts to jack up a successful TV show to over-the-top summer feature length expectations, and something's not quite right. Beautifully shot with high definition film, the movie is so awed with its own myth, it lacks humanity. It is all style to the point where one misses the content. Without much reason for the audience to get involved, the film drags.
To get a sense of the problem, one can contrast Jamie Foxx's work between the two recent movies. In Collatoral, Foxx plays an ambitious but otherwise ordinary cab driver who eventually has to act like an underworld kingpin just to survive. The nuances in his acting makes the film plausible and interesting. You can see him decide to act tough even though it goes against his better nature, yet he also finds he likes it. In Miami Vice, Foxx's version of Detective Ricardo Tubbs is all tough, self-satisfied cool. He appears on the screen at the height of self-possession and stays that way, quickly establishing his heterosexual credentials by stripping off his shirt to show his newly musclebound frame and making epic love with Naomie Harris. Ricardo Tubbs is cool, smart, talented, and hence, a bit dull. Jamie Foxx has so much attitude, his considerable acting ability has nothing to do.
When it comes to Detective Sonny Crockett, I confess to a weakness to the memory of Don Johnson's easy smile in the original and influential 1980s TV show. Now we are supposed to accept Colin Farrell in the pastel suit, and I suppose if I were a female reviewer, I would swoon at his gorgeous mullet hair-do, stubbled chin, and drooping mustache. He reminds me of Glenn Frey in the heyday of the Eagles, only with more hair gel. Crockett is supposedly so suave, he steals away Gong Li (playing underworld smuggler Isabella) on a speedboat to Havana to seduce her into further exorbitant drug deals as they both admire their infinite good looks in the bathroom mirror. I never found Farrell to be wholly convincing, perhaps because of the lingering air of disaster left over from his participation in Oliver Stone's Alexander.
Otherwise, the plot rehashes a zillion other smuggler's blues made-for-TV storylines. Sinister white supremacists have a "meet and greet" with some undercover FBI agents underneath a scenic bridge in the dark of night. The meeting goes badly once the supremacists' sniper shoots the agents into smithereens, and so the FBI calls in Sonny and Tubbs to infiltrate a Columbian drug-dealing organization to transport contraband on their speed boats.
While the film's cinematography is consistently painterly, with swooning vistas over Lear jets and Ferraris shining under lightning streaked skies, a large chunk of the plot was lifted straight from Mission Impossible 3 with the usual young woman tied down and tortured in her usual chair. When it comes to meet with the bad guys, where do the filmmakers pick? A shipyard.
Sonny and Tubbs soul-search about whether or not they have gone too far to the criminal side. At one point, Tubbs says to Sonny, "There's `undercover' and then there's `which way is up?'" When some of their police crew start to get hurt, Tubbs questions how much these underworld games are worth, but instead of caring, I mostly lulled by all of the cloud formations, distant gunfire, and windswept palm trees set against the sparkling purplish Miami skyline. Sometimes a movie can be too handsome for its own good.
Labels: Miami Vice

Unknown said…
I would concede that Foxx's characterization is pretty one dimensional. But I quite liked what Colin Farrell did with his role. At least, with the Gong Li romance angle, his character showed some humanity in addition to the tough guy swagger. I've always liked Farrell and feel that he's an actor who just needs the right material. He really hit it out of the park with IN BRUGES, which was a very entertaining film and he was very funny in it.

Back to MIAMI VICE. I think what is interesting about it is how Mann pushes the boundaries on what we've come to expect from narrative action films. A lot of times he drops us right into the middle of something and if you think about it, the actions of these characters define who they are.

The Film Doctor said…
Thanks, J.D.,

I reassessed Farrell's acting talents after seeing Cassandra's Dream, where he's very impressive. I need to see In Bruges.

This weekend, I will finally get around to seeing Heat. It does increasingly seem like Michael Mann is one of the best directors working today. Thanks for linking my work to your impressive blogathon.
July 4, 2009 at 9:02 AM

Rick Olson said…
I think you're right on about Farrell's acting ... I'm never wholly convinced. And I thought about the same thing of this flick as you did. Beautiful but dull.
July 6, 2009 at 10:10 AM

One could say that Mann does better when he gives equal attention to the law and the criminals. With Miami Vice, Mann seems to have over-refined his TV show into something mannered, beautiful, and insubstantial.

Alexander Villalba said…
“Sonny and Tubbs soul-search about whether or not they have gone too far to the criminal side. At one point, Tubbs says to Sonny, "There's `undercover' and then there's `which way is up?'" When some of their police crew start to get hurt, Tubbs questions how much these underworld games are worth, but instead of caring, I mostly lulled by all of the cloud formations, distant gunfire, and windswept palm trees set against the sparkling purplish Miami skyline. Sometimes a movie can be too handsome for its own good. ”

That’s my same conclusion as well. It seems to be a two-story film, one in which Mann locates the beautiful expressions of the locations and the eloquence of them, and the other story in which these “self-satisfied cool” characters (which I’ll extent to not just Foxx, but to everyone except the reliable Ciarán Hinds) persistently try to hijack the attention from the other while they’re in the middle of the frame with their own generic narrative. I could have enjoyed MIAMI VICE more without any of the characters, their performances and their plot, and just watch the images Mann finds in the skies and places, since the characters and their story is what breathe the dull qualities into the film.

For someone like Mann, who often draws characters that are both prototypes yet very human, it seems to be a hiccup in his style. After a few films in which the characters mixed maturity with swagger (i.e. Pacino, De Niro, and Cruise’ older look), with a result of realness both in appearance and in personality – more Sean Connery-esque, if you will, instead of Brosnan-like – the GQ style of both Farrell and Fox seems too out-of-a-magazine, which brings the result that is too artificial and, as you perfectly said, “self-satisfied cool,” both in their personalities and their utterly impeccable looks. In COLLATERAL, Fox looked and talked like someone who was a taxi driver that found himself in bad situation; in MIAMI VICE, he looks and talks as if he’s self-aware that he’s in a crime film, and he’s supposed to be a star. They are archetypes without Mann’s interesting humanities.

As an experimental film, MIAMI VICE is painless to forgive. Otherwise, it is indeed a rather frustrating entry.
July 10, 2009 at 1:22 AM

The Film Doctor said…
Thanks for your thoughts, Alexander. It would be fun to see just the skies and places of Miami Vice, minus the characters. I wonder if sometimes Mann goes with a weaker screenplay just to have an excuse to explore his painterly interests.
July 11, 2009 at 8:31 AM