A widower's loss and the downside of Pixar's Up 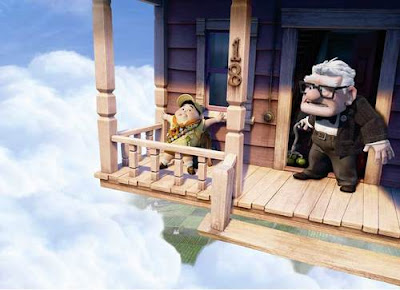 I understand that I'm supposed to genuflect before every new Pixar flick, but I fought sleep midway through Up, and now, one day later, I'm having a hard time remembering what happened in it.
Both Up and Drag Me to Hell feature characters who graphically lose their fake teeth. It would seem that screenwriters feel the omnipresent weight of that fast-growing population in American--the aged--so now we have a children's movie that stars 78 year old Carl Frederickson (Ed Asner) who looks a bit like a grumpy Spencer Tracy. When he finds an antagonist to fight, the antagonist also turns out to be another old man, explorer Charles Muntz (Christopher Plummer). What does having an elderly lead do for the film? It allows the Pixar director Pete Docter the opportunity to show Carl's growth from a child to old age in a rapid montage early on. In this summary, we learn that as a kid, he meets up with a fellow explorer, a tomboy named Ellie, and they eventually marry and go on to have a long, happy, loving relationship even though they learn to their grief that they cannot have children. They have always planned on visiting an exotic unknown place in Venezuela called Paradise Falls, and they feed their spare change into a large jar to eventually travel there. But, somewhat in the manner of It's a Wonderful Life, they never do get around to exploring, and just as Carl finally gets around to buying plane tickets, his wife sickens and dies, leaving him alone in the home they had converted out of their former clubhouse.
This early montage struck me as one of the best things about the movie. It shows how a sequence of images can summarize the transience, the pathos, and the pleasures of a marriage. The rapidity of the summary and the abrupt closure of Ellie's death make up some for its sentimentality. As the newly widowed Carl grumpily shuffles from room to room, noting how neighboring construction has eviscerated the surrounding landscape, there's little he can do except call "Take a bath, hippie!" to the local construction manager. When he gets into a tussle with a worker over damage done to his mailbox, the construction firm manages to get him labelled a "public menace," so he hooks up many balloons to the chimney of his house and arranges for it to float away.
So far, so good. The balloons supply the visual movement that an elderly character otherwise could not supply. A pudgy wilderness explorer boy named Russell happens to come along for the ride, and with an overt nod to The Wizard of Oz when Dorothy's house lands after being swept up in a tornado, Carl manages to bring his house down within sight of Paradise Falls.
At that point, Up loses its realism and shifts into a half-hearted fantasy world that has something to do with preserving nature. For instance, there's a exotic bird named Kevin, loosely patterned on Road Runner, who gets chased around by a pack of talking dogs. These dogs have voice boxes tied to their collars, so they kind of talk. Carl and Russell also befriend a mutt named Dug, who instantly loves them in a loyal doglike way when he's not distracted by a squirrel. With his new "family" of cohorts, and with the energy of a much younger cartoon hero, Carl starts to pull his still-floating house across cliffs closer to Paradise Falls. Since there has to be a villain to retain suspense, a long lost explorer Charles Muntz shows up with a bunch of dogs as his henchmen and as unlikely Red Baron-esque fighter pilots. It turns out that Charles wants to capture Kevin and keep him in his miraculously intact 60 year old zeppelin that has "The Spirit of Adventure" written on the side (a reference to Charles Lindbergh and his famous solo flight across the Atlantic in "The Spirit of St. Louis").
It was around this time that I nearly fell asleep. It seemed to me that the film got more conventional, especially in its plotting, as it dipped its toe lightly into a South American fantasy landscape. Carl has to have a change of heart for a later plot point. Similarly, Russell learns to break out on his own by tying himself to several helium balloons and using a hair dryer to navigate. There are a lot of fun flying scenes involving the house, the zeppelin, and the World War II fighter planes as they square off on each other above the clouds, but for me the meat (or heart?) of the movie still lay in the initial relationship between Karl and Ellie, and his sense of loss after her death. All of the rest drifts, like the house, further and further away from that core emotion. As Russell says to Carl at one point, "It's the boring stuff I remember the most." So it proves for the film--an everyday marriage proves more memorable than all of the ramped up adventures later.
Labels: Up

Richard Bellamy said…
Great minds think alike. I just posted my review of Up at Little Worlds. It seems I liked it better than you did, but I really enjoyed your review. My post focuses on images, which I really loved. But I guess I focus on artwork because I felt the adventure was merely entertaining.

It was a good adventure, but I think something was lacking. You seem to indicate that the montage of Carl's marriage was the best part. Yes, it was a very touching part. Well said: "an everyday marriage proves more memorable than all the ramped up adventures."
June 3, 2009 at 10:32 PM

Your site is one of my favorites seen around blog explosion. Keep up the good work.
I enjoy reading your blog and follow it (your link find my blog http://arieshu.blogspot.com
I wish you all the best in all years.

Sam Juliano said…
I also reviewed the film, but I feel completely different. I agree the opening montage was the highlight, but the subsequent story arc yieled so many magnificent set pieces, captivating characters and technical wizardry. It's spectacular reviews (the best easily of any film released this year and among the best ever) are well-deserved, it ranks for me as one of the very best films of 2009 and one of the all-time greatest Pixars. It's about love, loss and mortality and it's an exquite, enrapturing and altogether beautiful, ravishing and extraordinary film.

Rick Olson said…
I understand that I'm supposed to genuflect before every new Pixar flick ...

Nice review, FilmDr. I get a little tired of the reverence with which people treat Pixar. I thought Wall-E was so-so, hated "The Incredibles" and didn't even bother to see "Ratatouille."
June 4, 2009 at 3:08 PM

I enjoyed your review too, and you are right about the film's great images. I was mostly bothered by Up's plotting and shift from realism to fantasy. I also found it interesting how the limitations of Pixar's computer graphic versions of humans showed the most when the construction worker got blood on his forehead.

I appreciate your willingness to agree to disagree so graciously.

I noticed that some viewers approach Pixar films with something akin to religious fervor. It brings out the contrarion in me, although I agree with Hokahey about Ratatouille. I like the snotty food critic in that movie. My favorite Pixar films are still Toy Story one and two, in part, perhaps, because of their relatively modest agendas.
June 5, 2009 at 8:02 AM