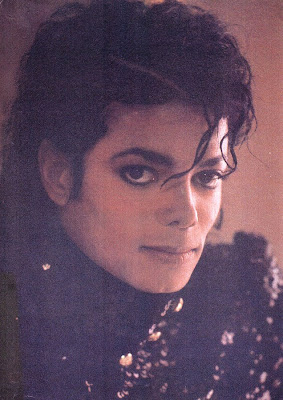 ---It has been strange to see the press shift away from the continual mockery of "Wacko Jacko" to an acknowledgement of Michael Jackson's considerable achievements. I've been admiring anew the noir aspects of his "Smooth Criminal" and "Billy Jean" videos and the Elizabeth Taylor shrine that shows up in the humorous "Leave Me Alone." Of the tributes, I enjoyed Invisible Woman's memories, Guy Trebay's discussion of Michael Jackson's fashion influence, and Sasha Frere-Jones' words:
"It made me nothing but sad—no change of venue, no new home, no new friends could anchor or comfort the most important musical ghost of the twentieth century. I often thought of a veal calf when I saw him—he had been raised to perform under extreme pressure before he had any idea of what life could be beyond performing for others. Then he spent decades trying to build a life without ever having seen one. He had the best ear in the world but he had no apparent idea of how people experienced everyday comfort, or even boredom."
---As for tributes to Farrah Fawcett, I was most struck by Arbogast's surprisingly tender one.
---As for the general strangeness of living through a media storm occasioned by the death of a celebrity, Pictures for Sad Children analyzes it well.
---Trailers of upcoming films of interest: Donnie Darko director Richard Kelly's The Box with Cameron Diaz, The September Issue, a fascinating-looking documentary about Anna Wintour, the editor of Vogue (the original Miranda Priestley), and Daybreakers, a vampire film where human blood becomes the new peak oil.
---Meanwhile, Andrew Sullivan continues to share dispatches from Iran. This "Bird's-Eye View of Violence" defies commentary.
---Phil Nugent gives credit to Pauline Kael:
"Kael's great parting gift to the world to leave behind a record of her enthusiasms, which will inevitably result in the creation of new work, because it will continue to inspire people to want to experience creative work as widely and with as tough a mind and as open a heart as she did. Someone that tough-minded doesn't keep subjecting herself to Neil Simon movies over and over just because William Shawn is paying for the tickets; she had to see if something was there, and if there wasn't, she was genuinely curious about why other people thought there was."
---Brian Clark of Copyblogger finds that "Blogging is Dead (Again)" in part due to Twitter and Facebook.
---Newsweek found six writers and asked them to discuss their profession:
"ORLEAN: There's also this new question, which is, will anyone buy this? Will someone pay for this? Will the magazine I'm working for go out of business? I don't know anyone no matter how successful they are—beside, you know, J. K. Rowling and what's-her-face who does the Twilight stuff—but I think the realities of the industry are present. I think you'd be foolish not to be at least aware of it. Maybe not suffering from it, but conscious of it.
BLOCK: I suppose you have to be, in the sense that you're professional. But I think the less attention I pay to what people want and the more attention I pay to just writing the book I want to write, the better I do. The enormous mistake a lot of young writers make is that they want to know what people want.ANDERSEN: The problem is, any time you try to game it in that way and then it doesn't work, then you feel like a complete schmo.BLOCK: Yes, absolutely."
---J. Robert Lennon of Los Angeles Times unveils what's really going on when writers are supposedly working:
"I surveilled myself during a recent writing session. The results are below.

8:05. Subject turns on laptop and sits on sofa in pajamas.

9:30. Subject puts extra pair of socks on over extant pair of socks."
---Not Coming to a Theater Near You reviews Buster Keaton's The General.
---Shooting Down Pictures found an interesting video sample of one of Greta Garbo's earliest films The Saga of Gosta Berling (1924) with commentary by Jan Olsson.
---Lastly, IFC.com shares "The 50 Greatest Trailers."
Labels: Notable film and media links