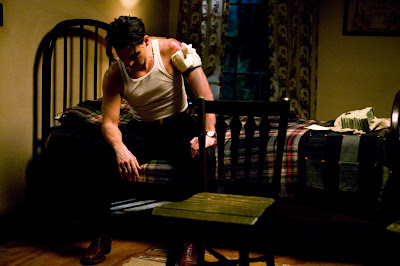 ---Firstshowing.net shows off the Behind the Scenes featurette for Public Enemies. The star of the aforementioned film, Johnny Depp also shares his favorite Youtube videos. I like the guy in Shakespeare and Co. Parisian bookstore who sets his hair on fire.
---Time tries valiantly to persuade us that Twitter will change the way we live, all of those tweets adding "up to something truly substantive, like a suspension bridge made of pebbles."
---Care to consider if you are any better off with high-speed internet? For n+1 magazine, novelist Benjamin Kunkel weighs the pros and cons:
"I have noticed that it's of no great use telling myself, when I go online, that I should muster my willpower against the sirens of amusement, distraction, and curiosity. I do better at not spending too much time at my computer if I remind myself how comparatively shallow and irregular my enjoyment of the internet is. The truth is that we are often bored to death by what we find online—but this is boredom on the installment plan, one click a time, and therefore imperceptible. And if is worth noticing your boredom—not for the sake of your prose style or your attention span, but simply for the sake of your enjoyment of life—it is for the same reason worth recognizing the general sensuous poverty of online experience."
---In some sort of weird Don McLean convergence, Chuck Tryon linked to this witty video about "the year the media died" at about the same time Jim Emerson wrote this post entitled "Bye Bye Miss American Privacy."
---Supervillain treats us to the Buzzcocks performing "Harmony in my Head."
---MovieLine found time to interview The Hangover director Todd Philips:
"I mean, all my movies tend to be about guys, and these sort of weird male rituals of bonding, whether it’s Old School and fraternities, or I did a movie called Road Tripbefore that. And it’s more because I grew up with women only; I didn’t have a dad, and I grew up with three women. I never really understood fully men’s relationships to each other. And I also always found it uniquely awkward the relationship between heterosexual guys. There’s never the intimacy that women have in their relationships, and when there is, it’s really awkward. So it’s just something I find as a good starting point for comedy."
---Out1 has the new Wikio list of top 100 film blogs. Kudos to Ibetolis' Film for the Soul and its "rise to the top tier."
---For Some Came Running, Glenn Kenny points out some of his favorite film books. When discussing Robin Wood's Hollywood: from Vietnam to Reagan, he writes:
"It's difficult to go with just one Robin Wood book—his studies on Hawks and Hitchcock are of course indispensable—but I settle on this one because it's his most galvanic, the one that's most densely packed with provocative arguments and game changers. When he kicks off an evisceration of `The Lucas-Spielberg Syndrome' by admitting `[The films] work' and continuing, `because their workings correspond to the workings of our own social construction. I claim no exemption from this: I enjoy being reconstructed as a child, surrendering to the reactivation of a set of values and structures my adult self has long since repudiated, I am not immune to the blandishments of reassurance,' well, one understands that one is not in the realm of any kind of ordinary film criticism."
---According to the Clash, "phony Beatlemania has bitten the dust." Not quite.
Labels: Notable film and media links

Joel Bocko said…
I am making the rounds to remind everyone about the "Reading the Movies" exercise I started. I'm going to compile everyone's lists into one master list in a week or two, so jump in! The original post can be found here:

The Film Doctor said…
Thanks for the reminder, Movieman. I will put together my list later this week.
June 8, 2009 at 7:43 PM