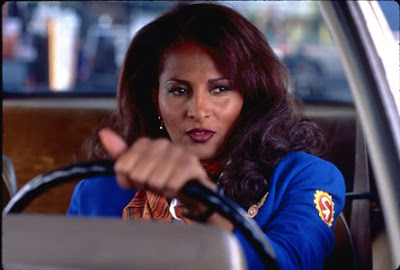 [In honor of the wide release of Inglourious Basterds, the Film Doctor dug into his pre-blogging vaults to find this of-the-period review of Jackie Brown.]
Boasting a top notch cast, writer, and director, Jackie Brown proves a truly oddball creation--the perfect '90s replica of the kind of film you might see on Saturday afternoon TV chopped up into little pieces by long repetitive ads about the advantages of aluminum siding. Quentin Tarantino, epoch-making and Travolta remaking writer and director of Pulp Fiction, had the rights to the obscure Elmore Leonard novel Rum Punch even before he made Pulp. He also really likes Pam Grier, the now 40-something star of '70s violent blaxploitation movies like Foxy Brown and Coffy (she also has minor roles in films like Mars Attacks and Escape from LA). So, when Tarantino decided to settle down a bit from making cutesy appearances in Girl 6 and From Dusk to Dawn, he returned to his seventies roots with Jackie Brown.
So, given all of the hype, what do you have? A basic bait and switch noir plot involving a half million dollars. A stewardess for a Mexican airline, Jackie Brown (Grier) begins the movie getting busted by some ATF cops, one of them played by Michael Keaton, for carrying money and some blow in her overnight bag. Ordell (Samuel L. Jackson) bails her out because he sells weapons illegally, using Brown to smuggle the money to LA. In one early entertaining scene, Ordell shows off his wares to Robert DeNiro as bikini-clad babes fire off rounds of ammo on video ads ("Nothing gets between me and my AK"). 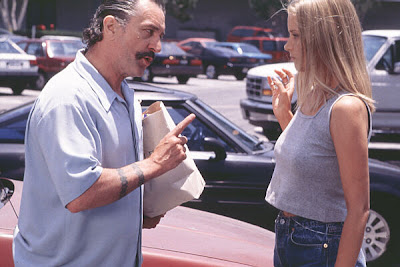 Meanwhile, DeNiro, who plays a complete bonehead ex-con, gets stoned with Bridget Fonda, a lithe spacy surfer girl in a beachside apartment. We learn that Ordell spends a significant portion of his time killing people who might cop a plea to the police and thus ruin his business. We also get to know a bail bondsman named Max Cherry (Robert Forster) who befriends Brown. Eventually, Jackie Brown works out a way to get the half million for herself as she plays the cops, Ordell, and everyone else simultaneously.
Having said all that, why see the picture? DeNiro and Fonda spend an awful lot of the 2+ hour movie trading bong hits in Ordell's living room (at one point she watches her young dad, Peter Fonda, on TV in Dirty Mary Crazy Larry (1974), a cute touch). I didn't mind DeNiro acting as a moron but the joke gets old. He and about 8 other men show up in 99% of the movies out these days, and I'm getting sick of seeing him. Pam Grier performs well, but her role lacks passion since she has to spend much of her time calculating her next predictable move. Samuel L. Jackson gets the most to do, but he makes several unbelievable errors in judgment later on. We never really see his weapons business in operation, and so his criminal world remains abstract, unrealized. If he's so smart, why does he hang out with the likes of Fonda and DeNiro's characters? At one point he has to lecture them on excessive daytime drug use. Robert Forster gives a quiet, restrained performance, but I got tired of looking at his crinkled face in close-up.
All in all, there are too many leisure suits, VW vans with beads, toe rings, red lit bars, and Delphonics songs. I don't see any real merit in exactly reproducing a mediocre '70s film. In contrast, Pulp Fiction had plot twists, wit, and continual surprises, a real charge throughout. Jackie Brown feels weirdly tired, as if Quentin Tarantino has already become jaded with fame. Even the sex and violence is listless, almost absentminded. Using a kind of grunge aesthetic, he wants to rub our noses in the dank gritty bail bondsman's office, the banal food court at the LA mega-mall, and the Flintstones furnishings of Jackie Brown's apartment. If anything, the movie reminded me of how much '70s style remains all around us everywhere we go. I would prefer a better reason to dwell on it.
Labels: Jackie Brown

The Film Doctor said…
Thanks for the comment, Rick. I am sometimes quite surprised by the veneration this film gets from critics. As far as film adaptations from Elmore Leonard novels are concerned, I much prefer Soderbergh's Out of Sight.
August 26, 2009 at 7:08 PM