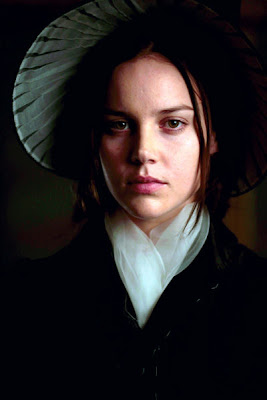 "John Keats
John Keats
John
Please put your scarf on."
---J. D. Salinger
With Bright Star, Jane Campion has taken the real-life account of John Keats' last 3 year romance with Fanny Brawne, and fashioned a remarkably controlled and nuanced film. Some notes:
1) Bright Star nicely balances the verbal and the visual, as well as the feminist and the masculine given the film's setting in 1818 England. Fanny (Abbie Cornish) announces her skill as a seamstress and a creator of fashion in the first scene. Her high-waisted dresses of diaphanous textures and daring color coordinations keep complementing the many poems and quotes from Keats' letters incorporated into Campion's screenplay. Campion even finds ways to color coordinate the nature scenes and the interiors to match Fanny's outfits. It is to all of the actors' credit that they don't allow the costume design or the poetry to overwhelm their performances.
2) The wispy stubbled Keats, as played by Ben Whishaw, looks like a disheveled young Keith Richards who always seems ready to dissolve into nature like his nightingale. As the original Keats wrote, "I might drink, and leave the world unseen, / And with thee fade away into the forest dim: / Fade far away, dissolve, and quite forget . . . " Indeed, Keats claims that the poet is the most unpoetical of creatures, because he so often loses his identity in other things, specifically nature. This elusive quality of Keats perhaps makes him the most slippery of the English romantic poets to try to recreate in film, but Campion succeeds because she cast such an unassuming actor. Whishaw is noticeably thinner than Abbie Cornish, and he makes for the most retiring of lovers for Fanny to take care of. 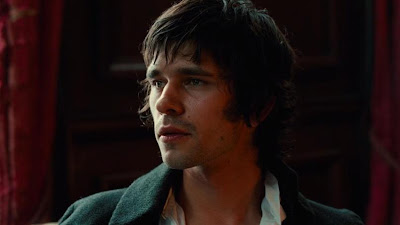 3) Fortunately, Keats' nature-oriented aesthetic suits Campion's purposes well, because Fanny can always turn to the outdoors to make up partially for Keats' absences and eventual death. In one striking shot, after she falls in love, Fanny lies back on a bed as a breeze ruffles everything in the room. If Keats spends too much time with his writing pal Charles Brown (Paul Schneider) elsewhere, Fanny waits on his letters, and really, which is better? Seeing the man or receiving his letters? In a Nabokovian moment, Keats suggests that they both should have been butterflies. In turn, Fanny raises a bunch of butterflies in her room. Nature ends up being a good solace for both Keats and Fanny, serving as a medium for their romance.
4) At times, this romantic emphasis on nature gets a bit silly. When Charles sends Fanny a valentine, Keats jealously stomps around in her yard in the rain, acting "odd," and the three of them have to settle their difference out in the wet woods. In a bizarre form of overdoing the dissolving-into-nature shtick, Keats suffers a severe chill out in the cold rain that leads somehow to his first coughing of blood. At another time, he randomly appears under a bush of the Brawne household after an extended absence in the city. Under a bush? As the Brawnes carry the frail bedraggled Keats into the house, I was reminded of how Mozart looked shortly before his death in Amadeus. What is it about Hollywood's portrayals of genius as people frail and sickly unto death? 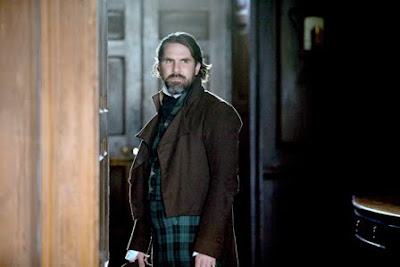 5) As for the annoyingly less talented but protective Charles Brown, he provides the film with a romantic triangle of a sort (you can tell he's something of a villain due to this goofy green outfit he usually wears). Charles resents Keats' affair with Fanny because he wants him to write and not risk being trapped in a bourgeois marriage. Charles also represents every brutish masculine attribute that Keats lacks. For instance, Charles knocks up a maid named Abigail for no particular reason except that he can. Meanwhile, Fanny gets so devoted to the increasingly consumptive Keats, she freely admits that she would do anything with him, but Keats nobly replies "I have a conscience." Charles is both a foil to Keats and an impediment to Fanny. He keeps them apart. In the grand tradition of films like The Age of Innocence, Campion finds numerous reasons to keep the two lovers separate. After all, Keats has no money and no prospects, so he can't marry her. He also happens at times to live in the same building in a different wing so that he and Fanny can communicate by knocking on a wall between them. 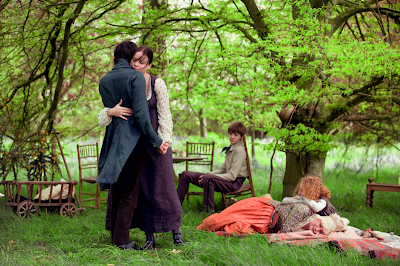 6) When I first saw Bright Star, I was bothered by the way Fanny became such a groupie over the droopy poet. She seemed to lose her artistic integrity in the process. Their grand love affair gets a bit too operatic for Keats' persona, but that is a minor quibble. Ultimately, Bright Star is masterfully shot, with an impressive sense of color, fashion, and period detail that keeps the viewer off-balance due to Campion's ability to steer from Masterpiece Theater period piece cliches. At one point, Fanny asks Keats, "Shall we awake and find all this a dream?", but Bright Star struck me as remarkably grounded and dry-eyed for a period romance. Fanny Brawne's fierce maternal solicitude makes sure of that.
Labels: Bright Star

Andrew K. said…
Well done review. I am annoyed that no one is praising Ben Whishaw's work, and I think it all comes down to the fact that audiences (sometimes unconsciously) demand that their leading men be assertive and brash. Pity, I thought he was brilliant (as was the entire cast).
February 10, 2010 at 6:42 AM

The Film Doctor said…
Thanks, Andrew. Ben Whishaw certainly makes for an unorthodox leading man, just as Abbie Cornish appears slightly larger than him. Campion's daring casting is a key part of the film's impact.
February 10, 2010 at 9:44 AM

Campion even finds ways to color coordinate the nature scenes and the interiors to match Fanny's outfits. Well said. The colors were amazing. The cinematography keeps your attention. I loved the shot of Fanny and the little girl on the boardwalk in the reeds. Memorable. And there's a sudden stark contrast with all that colorful nature at the end when you see the gray, minimalist shot of them taking the coffin from his rooms (I've been there - just had to brag) next to the Spanish Steps in Rome.

At times, this romantic emphasis on nature gets a bit silly. Very true. Movies like this all seem to have a scene in which the lovers argue or make up or prance about in the rain. The Young Victoria includes one. So did Pride and Prejudice.

Ultimately, Bright Star is masterfully shot, with an impressive sense of color, fashion, and period detail that keeps the viewer off-balance due to Campion's ability to steer from Masterpiece Theater period piece cliches. Yes, I agree for the most part, but you mention some of those cliches in your review: the argument in the rain, for example. But the film definitely has more depth than a Masterpiece Theater show.
February 10, 2010 at 8:49 PM

The Film Doctor said…
Thanks, Hokahey. I just went out to see From Paris with Love. Zut alors! Vincent of Pulp Fiction wouldn't need to shoot scores of nameless drug traffickers to feel cool, but apparently now Travolta does.
February 11, 2010 at 9:35 AM

Richard Bellamy said…
I gave that a miss and took my daughter to see The Blind Side so that I can say I've seen all 10 Oscar nominees for Best Picture. (We had a snow day yesterday.) That movie should have been an animated kids' movie. Every scene was totally unrealistic.
February 11, 2010 at 10:05 AM

The Film Doctor said…
Seriously, though, we are just scratching the surface of Bright Star. I should have written more about Abbie Cornish's performance. The movie's cinematography merits a closer scene-by-scene analysis.
February 11, 2010 at 6:33 PM