Luc Besson, From Paris with Love, and the cheerful American mucker 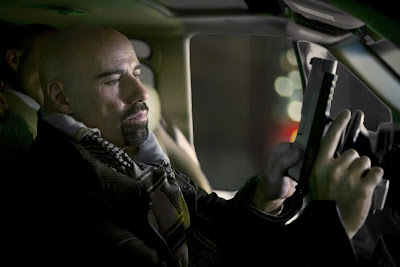 "It's no coincidence that we have muckers. Background: `mucker' is an Anglicization of `amok.' Don't believe anyone who says it's a shifted pronunciation of `mugger.' You can survive a mugger, but if you want to survive a mucker the best way is not to be there when it happens."
"You're a predatory beast shut up in a cage of which the bars aren't fixed, solid objects you can gnaw at or in despair batter against with your head until your get punch-drunk and stop worrying. No, those bars are the competing members of your own species, at least as cunning as you on average, forever shifting around so you can't pin them down, liable to get in your way without warning disorienting your personal environment until you want to grab a gun or an axe and turn mucker."
---from John Brunner's Stand on Zanzibar
"Three faculty members at the University of Alabama in Huntsville were shot to death, and three other people were seriously wounded at a biology faculty meeting on Friday afternoon, university officials said. The Associated Press reported that a biology professor, identified as Amy Bishop, was charged with murder. According to a faculty member, the professor had applied for tenure, been turned down, and appealed the decision. She learned on Friday that she had been denied once again."
---"Professor Said to Be Charged After 3 Are Killed in Alabama" from this morning's The New York Times

In John Brunner's 1968 science fiction novel exploring an over-populated future, "muckers" become a common problem. Biologically fed up with the pressure of competing for food, space, and privacy, people routinely go berserk and start killing everyone around them until they are killed or subdued. Given the recent tendency of people, especially Americans, to act similarly (although they usually shoot themselves before the police can apprehend them), I find myself thinking back to Brunner's prediction.

I also thought of muckers when watching the otherwise forgettable Luc Besson-produced action thriller From Paris with Love. Besson has been responsible from some excellent films, notably The Fifth Element and Leon, but he appears to have long since settled into writing or producing stylish B-movies like District 13 or Angel-A. I enjoyed the first two Transporter films, but not so much the third (although Dennis Cozzalio liked it). Besson has flair and style, although one wonders about his increasing tendency to cynically cater to the prejudices of American male audience members. 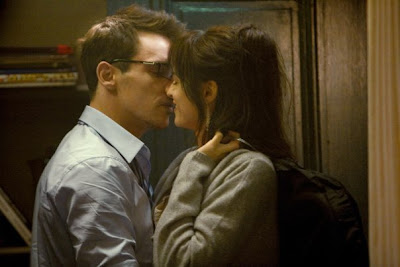 With From Paris with Love, that cynicism is outright disturbing. After a lengthy opening sequence that's basically an ad for a Cadillac Escalade, we learn that James Reece (Jonathan Rhys Meyers with a fey mustache) reports to the CIA undercover as he works as a personal aide for an Ambassador at the Embassy in Paris. He has a beautiful girlfriend Caroline (Kasia Smutniak) who likes to model fashionable clothes and fix rooftop dinners looking out on the Parisian skyline, but here's the rub: the CIA wants James to partner with a special agent named Charlie Wax (John Travolta) and assist him with indiscriminately massacring legions of Chinese drug traffickers and other suspicious-looking people for much of the rest of the movie. Gradually, we learn that Wax has a terrorist ring in mind, but mostly he just shoots up a Chinese restaurant and various underworld lairs when he isn't blowing up various cars with a bazooka or whatever. In the course of the movie, the more conscientious Reece learns to shoot people in turn, until he too attains trigger-happy bliss.

Now, I understand the need for action in a film, but in From Paris with Love, any real pretext for a reason to shoot anyone vanishes as soon as Wax appears, and we are continually exhorted to think of his gun-slinging, cursing, chortling, hair-piece-free character as cool. In fact, at one point two men hand Wax a paper bag with some Royales with Cheese (Quarter Pounders from McDonalds) to sadly remind us of how far Travolta has fallen since his glory days as Vincent Vega in Pulp Fiction. Vincent wouldn't need to shoot scores of nameless drug traffickers to feel cool, but apparently now Travolta does. I don't even want to think about how Besson's story hints at French contempt for belligerent cowboy American foreign policy.

I wonder how much upcoming muckers get their ideas from the cheerful consequence-free slaughters of films like From Paris with Love?

Labels: From Paris with Love

Information Review said…
John Travolta is wild and impressive in the movie, a great action film that is wild fun to the very end.