The pleasures of shooting the bull: Bulworth starring Warren Beatty and Halle Berry (1998) 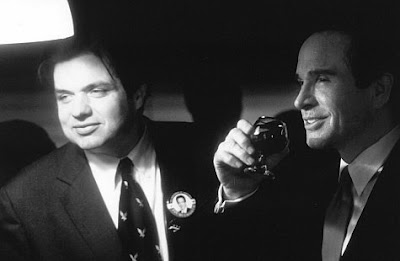 [Note: In his new biography of Warren Beatty entitled Star, Peter Biskind wrote: "A razor-sharp commentary on contemporary American politics, it [Bulworth] is one of his best pictures, but it never got the business nor the recognition it deserves." I'm not sure if I entirely agree with that, but I dusted off my of-the-period (June 4, 1998) review of the movie. I wonder how Bulworth would differ if Beatty wrote it today?]
There are things you don't expect to see or hear in a movie anymore, like an eloquent defense for employing 7 year old kids to sell crack in South Central Los Angeles (it's the only growth industry they can join, and their age keeps them out of jail). Reporters keep asking Senator Bulworth, "So you're saying the Democrats don't care about what happens to African Americans?" And he answers, "Isn't it obvious?"
You don't expect a political comedy about a manic, suicidal 60 year old senator to consistently attack the greed of medical insurers. You don't expect baby boomer Warren Beatty to embrace hard core rap music and rap culture throughout the movie, and he does, very much at the risk of making himself look like a complete buffoon when he dresses up in homeboy shorts, tennis shoes, a red long-sleeved t-shirt, wrap-around sunglasses (to be worn at night), and a black ski cap.
Because of Beatty's willingness to take risks, Bulworth turns out to be one of the most bracingly thought-provoking and surprising films I've seen this spring. Even if you don't agree with its politics, you can't deny writer/director/producer Beatty's devil-may-care attitude, his urge to confront the complacencies of his audience. Bulworth makes Primary Colors look like bromide, and it really makes Robert Redford's The Horse Whisperer a bland self-referential Reaganesque cake of Ivory Soap.
Written in the tradition of Tim Robbin's Bob Roberts, Bulworth is all the more barbed and satirical because of its prevailing sense of hopelessness. It's structured like Network; Bulworth can generate excitement by claiming he's mad as hell and not going to take it anymore, but Beatty knows that any real dissent gets immediately commodified and rendered neutral by the media. He can't win, but you find yourself admiring his anti-PC chutzpah.
The movie begins with Jay Bulworth, senator of California seeking reelection, weeping over his TV political ads that he loops repeatedly on videotape in his Washington DC office. He suffers a breakdown as he watches himself walking the dog and serving potato salad to his family while his cliche-ridden voiceover appeals to voters about the "new millenium." He hasn't slept or eaten in days, and so he contracts out a Mafia hit man on himself as he arranges for a new 10 millions dollar life insurance policy for his daughter.
Suddenly quite free to say whatever he likes in the face of imminent death, he flies to California and immediately tells a congregation of African Americans that they're never going to get anywhere if they support O.J. Simpson. When they ask why a government program hasn't helped them with social programs, Bulworth cheerfully admits that they don't pay enough to his reelection campaigns, and so he's been pandering to the power elite--the insurance industry, the banks, oil conglomerates, etc. 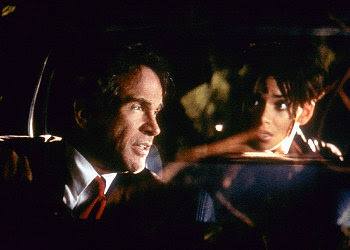 Pretty soon, he joins Halle Berry and spends the rest of the movie dodging the mafia bullet, rapping during debates and fundraisers, and hiding out in a crime-ridden area in South Central LA, a world of police helicopters hovering overhead with searchlights, bars on the windows, graffitied walls, and kids selling vials of crack on street corners. You sense after awhile that Beatty's looking for a new form of political and artistic legitimacy in rap culture. He wants to win over Halle Berry's character, the beautiful streetwise Nina, and it's hard to say whether she's using him for her own ends or gradually learning to like his "phat" speeches.
You could say that Beatty's suffering from a severe midlife crisis, the aging movie star once known for bedding half the women in LA in Shampoo now using hip hop to prop up his potency, cinematic vision, and liberal idealism. Fortunately, he makes fun of himself in the process. After one of Bulworth's performances, "Little Gangsta" asks his dealer boss, "Is that how white people rap?" At another point, Bulworth takes a blunt from a huge bouncer in a nightclub and cheerfully blows smoke into his campaign advisor's face. You can either laugh or get ticked off. Beatty genuinely doesn't seem to care.
Labels: Bulworth

Edward Copeland said…
Bulworth is such an infinitely superior movie than Primary Colors. I haven't re-watched it recently, but as dysfunctional as the Senate has become, basically becoming a collection of 100 people holding the country hostage to their whims using rules they made up that have no basis in the Constitution, I imagine that the film would seem even more topical today.
February 17, 2010 at 10:33 PM

The Film Doctor said…
I hadn't thought about how Bulworth might reflect the current Senate, but I do like the way Beatty went after targets that most moviemakers would automatically avoid. As Biskind writes, "What is unprecedented about Bulworth is that Beatty names names--individual politicians, specific corporations, particular lobbies--something few, in any, American movies had ever done."
February 18, 2010 at 8:44 AM