The Lady and the Frank: 10 questions about the critical reception of The Tourist

Why are critics being so harsh on this film?
1) Is it because Angelina Jolie does not jump off of any speeding semis as she does in Salt?
2) Is it because we've gotten used to Johnny Depp wearing lots of makeup? Perhaps it is because Johnny has a haircut that makes his face look plump?
3) Is it because The Tourist alludes to the train scenes of Hitchcock's North by Northwest, the tile rooftop chases of To Catch a Thief, the bathroom-under-siege scene of Foreign Correspondent, or the Venice scenes of Minghella's The Talented Mr. Ripley? Would the critics have preferred a more prestigious cinematic pedigree? 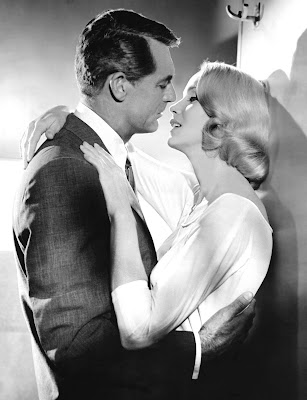 4) Is it because no one (except for Jolie's character) knows what the mystery man of the film, Alexander Pierce, looks like? Are we supposed to think of George Kaplan of North by Northwest or Keyser Soze of The Usual Suspects?
5) Is it because the critics prefer Jolie as an assassin (Wanted), Grendel's mother (Beowolf), or Lara Croft to the well-dressed, ladylike, demure, and "ravishing" Elise Clifton-Ward of this film? According to Jolie in Vogue, "I was looking for a very short thing to do before Brad started filming Moneyball. And I said I needed something that shoots not too long, in a nice location for my family. Somebody said there’s a script that’s been around, and it shoots in Venice and Paris. And I said, ‘Is it a character I haven’t played before?’ And they said, ‘Yes, it’s a lady.’ Uhhuhhuhhehhehheh." [Note: when it comes to defending The Tourist, Jolie doesn't help much.]
6) Is it because Paul Bettany's role as Inspector John Acheson reminded them too much of the fighting angel apocalypse of Legion?
7) Is it because today's movie critics cannot stand a film full of star quality, room service, love, a Parisian cafe, a classy restaurant, a private jet that a villain turns on a dime, motor launches in Venice canals, a gorgeous hotel suite (where Balzac and Proust stayed once, no less), and a fancy-dressed ball? 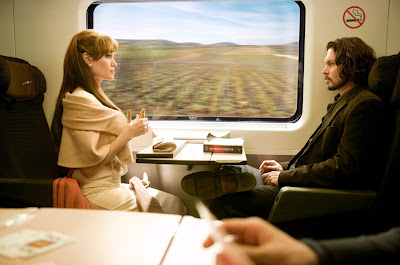 Is the film too European, too stately, and too refined for them to take?
8) The film's director, Florian Henckel von Donnersmarck, made The Lives of Others (2006), which won the Oscar for the Best Foreign Film of that year! Is that not a good enough background for a director?
9) Or is it because Depp plays an awkward American schmuck named Frank, a community college math teacher and the obvious person for the male audience member to identify with? Is it because Frank needs lessons from Elise in how to summon her to dinner on the train? Is it because Depp is the closest thing we have to Cary Grant these days? 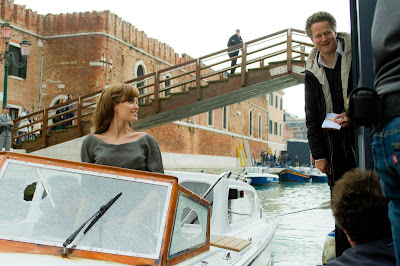 10) Ultimately, do critics dislike The Tourist because it reminds them how far our tastes have moved away from old-fashioned movie glamour?
Meanwhile, recent awkwardness concerning The Tourist and the Golden Globes . . .
Labels: The Tourist

Craig said…
I've been curious about the hostility myself -- so similar are the pans it almost feels like contempt-by-committee. (Except for Stephanie Zacharek, the film's lone admirer.) Either it's really bad, or it's being dissed due to an amalgam of the reasons you mentioned. I take it you liked it?
December 13, 2010 at 11:23 PM

The Film Doctor said…
Certainly The Tourist is not as good as The Lives of Others, but I walked out of the theater perplexed by the extremely negative slant of the reviews (a friend of mine didn't want to see the movie because of them). I liked The Tourist in part because I figured out the big twist early in the movie, so I could enjoy the double sided nature of the dialogue once I knew how the lines could be interpreted another way. The Tourist has a lot of poshlust, swooning shots of hotel interiors, Bond tropes (with one former Bond Timothy Dalton helping out), but it also has Jolie looking gorgeous. The film provides enjoyable high-level cheese as one finds in To Catch a Thief. I wish more movies erred in that direction.
December 14, 2010 at 9:54 AM

Ed Howard said…
This makes me want to see this a lot more. I love To Catch a Thief, and I wish there were more movies nowadays that were willing to just have glitzy fun with big stars, like Soderbergh's Ocean's movies. The Tourist looks like it's entertaining, and like it doesn't aspire to anything more than that. Is that so bad?

As long as I brought up Ocean's, I'll mention that I think Clooney, not Depp, is the closest we have now to a Cary Grant-type star. But Angelina Jolie is no Grace Kelly.

You seem to imply here that critics liked Wanted... Really? What a terrible, nonsensical, utterly stupid movie that was.
December 14, 2010 at 10:07 AM

Erich Kuersten said…
I agree with Ed, and now I want to see the movie. The commercials made me dismiss it as a timid case of groupthink, where not a single plot twist or line of dialogue wasn't field tested in at least three other films. But if the critics are jumping on it, then I'm all for protecting it. Stephanie rulez!
December 14, 2010 at 12:09 PM

Richard Bellamy said…
Film Dr, you already know this, but I just didn't detect the old-fashioned movie glamour here, and I love old-fashioned movie glamour. Also, the film may have alluded to classic films, but the film didn't do enough on its own - achieving enough Cary Grant glamour or Hitchcockian suspense - to be worthy of making those allusions.
December 14, 2010 at 5:58 PM

rtm said…
Interesting counterpoint, Doctor. I don't always agree with critics and because of the five reasons I was excited for it (http://wp.me/pxXPC-2tf), I still went to see it. None of the points you mentioned here is the reason why I'm not crazy for this movie. Because of Donnersmarck's credence, I was hoping for something with more substance but the whole thing is just pure fluff.

Though it's refreshing to see Jolie taking a break from her kick-ass mode and Depp emerges looking like a real person instead of his usually-unrecognizable self, there wasn't much of a believable connection between the two. In any case, I'm not going to write another review of this movie again here, but if it weren't for Rufus Sewell and Dalton's involvement, I'd have waited for this on dvd.
December 14, 2010 at 6:03 PM

I thought of Clooney too as today's equivalent to Grant.

I get the feeling that the filmmakers of The Tourist liked stacking the film with stars like Sewell and Dalton, but the lead guy (Depp) has to be slightly dorky, so that he can rise above it later? There's no real male equivalent to Jolie's character in the movie, and, increasingly, actors capable of playing that part are hard to find.

I admire Stephanie Zecharek's review now that you've pointed it out. It would be interesting to know more about how much film critics fall prey to peer pressure, and how much easier it is to agree with the panners than to affirm anything. Give her credit for sticking to her reaction.

We can respectfully disagree. Just the attempt to create old-fashioned movie glamour may be enough for me to like Donnersmarck's film.

I realize that many critics didn't see much of a spark between Depp and Jolie. That may be because Depp is too cagy a performer to expose that kind of vulnerability (does he ever show any vulnerability as a pirate?).
December 15, 2010 at 2:45 AM

Anonymous said…
I never care for those Pirates movies, I think the whole franchise is overrated.

As for this comment "There's no real male equivalent to Jolie's character in the movie, and, increasingly, actors capable of playing that part are hard to find" I'd think Sewell would do the job just fine if given the chance. The only problem is that he's not considered bankable.
December 15, 2010 at 10:50 PM

The Film Doctor said…
Yes, I couldn't agree more about the pirate flicks.

I found it interesting how people like Sewell kept showing up around the edges of the film.

Now that Donnersmarck considers The Tourist a comedy for the Golden Globes, does that mean the whole film was an ironic gesture on his part? Is he pandering to the negative critics? Now, Jolie wonders if she should go to the ceremony. The film certainly gets some strange reactions from people.
December 17, 2010 at 9:08 AM

Maurice Mitchell said…
I wasn't planning to see the movie so I read the summary from movie spoilers.com. Either the film is way better than the summary or the critics are right. Good point about Hitchcock though.
January 4, 2011 at 9:30 AM