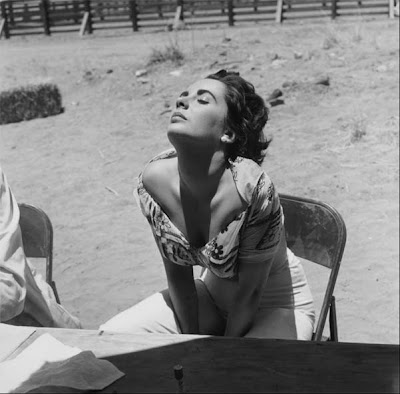 RIP, Elizabeth Taylor.
I don't know what to say (finding out the news was like getting punched in the gut), so I'll quote Nathaniel Rogers:
"Be great. Be beautiful. Ride a horse. Get married. Get divorced. Act like a total diva. Wear something spectacularly sexy, preferably white. Make people want more."
Also, Paul Newman's tribute.
From William J. Mann's biography How to Be a Movie Star:
"When Shirley MacLaine first walked onto the lot on loan-out from Paramount, she was a twenty-three-year-old kid with big red curls and not a lot of experience. She looked around in awe as she stepped into Sydney Guilaroff's hair salon. There was Greer Garson, she recalled `swathed in a turquoise blue robe that set off her carrot-colored hair,' and Deborah Kerr, `thin-hipped and more bawdy than the world ever knew.' In came Audrey Hepburn, `all Dresden,' walking her small poodle and gliding along `as if on roller skates.' Then Debbie Reynolds bounded through the doors, `the pride of Burbank, punching jokes and being cuddly.' Sydney, tall and graceful in his finely woven, skintight linen shirts, would pass up and down his row of ladies, `painting and sculpting the beautiful hairstyles.'
And finally, Elizabeth Taylor made her appearance, `chunky and looking ten years younger with no makeup,' said MacLaine, who watched her with fascination. `She'd flop into any chair that was vacant, eating a cheese Danish and plopping her feet up on the table in front of her.' MacLaine would tease her about her big feet, saying that they looked like a weightlifter's, and Elizabeth would laugh in that high-pitched girlish cackle of hers. Then Sydney would come around to light Elizabeth's cigarette, `and she would draw the smoke long and deep into her lungs with the same low-down basic oral gratification she lavished on the cheese Danish.' Another day at MGM had begun."
Labels: Elizabeth Taylor

Richard Bellamy said…
I've always loved the movie A Place in the Sun, based on Dreiser's An American Tragedy, mostly because of the performance of Montgomery Clift and the performance AND sexy presence of Elizabeth Taylor. Especially when she was young, she had that special something.
March 24, 2011 at 9:07 AM

The Film Doctor said…
Yes, I found A Place in the Sun a little pretentious, but she is impressive in the film. I recently rewatched Cat on a Hot Tin Roof. Even though the play itself strikes me as a ludicrous caricature of the south, Taylor is again amazing to watch. Time to go back and see Butterfield 8 again.
March 24, 2011 at 12:54 PM