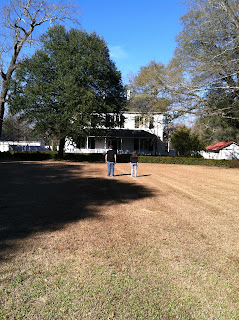 Today, the video production class finished the DVD containing the movie Entrapment.  The class will show the movie to the entire school tomorrow during the Interim presentations.  So far, the buzz has been good.  My significant other just now flinched at a jump scare while watching the movie, and the film has a delightfully bleak, surprising, and abrupt ending that leaves the viewer with a pleasant sense of hopelessness and Poe-esque entombment.

My notes from the past few days:

1) Now, on the morning of the 9th day of the production, the class is busy editing the "Making of" video, the final movie entitled Entrapment, and the blooper reel, so I can pause for a moment. We've been shooting at the manor all week, but it feels like one long day.

2) A cold mansion on a wet dark morning.  The crew is in the small dining room filming a scene where Fiona hops out of a cabinet by the back door. I'm sitting in a decidedly chilly gun room that could use a fire in its fireplace. We keep the heat off to cut down on noise in the room tone.  I keep recording random comments from the crew in the Moleskine:

"You still need to turn around faster," says the director.

"He turned around before she said Boo!"

"Go back in your hidey hole, Fiona."

"Are we getting enough reaction from Jude?"

"Don't use the mic as a weapon."  They shoot another take.  Jude grimaces afterwards.

"He wouldn't have calmed down that quickly."

I point out that the "The goal is to end up with a better movie than the blooper reel."[Later, we realize that we will have to reshoot this scene.  Any shot that involves Jude and Fiona talking to each other for any length of time requires at least 15 takes, and the director wishes that she had taken more.]

Every time the crew changes places, the cinematographer grabs the camera and says "Moving!" She claims that she has some shots that she hates (but has to use anyway), and others that she loves. The class has a chronic tendency to start filming a scene without remembering to turn on the microphone.

3) In the afternoon, the sky darkens considerably as we prepare Fiona for the haunting moment when she realizes that she and Jude are now in the old photograph. It's not easy getting her to look properly freaked out, so she jabs her fingers in her eyes to make herself cry, and says "This is why I haven't cried in front of anyone since the fifth grade." I think of Kubrick tormenting Shelley Duvall for weeks and months in the midst of making The Shining.  Is directing inherently sadistic?

"Later, we're going to add in a loud bang," says the director. "Look up," she says to Fiona. "Turn your body forward.  Yell `Jude' and run out of the room."

The director bangs on the wall. "Do you know what to do?"

"Look bewildered and on the edge of mental breakdown?"

"Right." Meanwhile, I take pleasure in shooting footage from the bird's eye point of view from the landing over the stairs.

4) Still later in the day.  The crew works very hard to finish scene 2. Bored, I doze briefly in the parlor (oddly decorated with elephants and Santa Claus figurines), but not for long, because sleepers tend to end up on film. At one point, Jude fell asleep for 3 hours, so we placed some reflecting foil on his head.

5) I keep opting for a student to lie face down in a small empty fountain (except for some rank cold dirty water) at the side of the house to help create atmosphere in an early point-of-view shot, but no one seems inclined to do it. We all agree that a catering service would be nice.  Some hot chocolate? 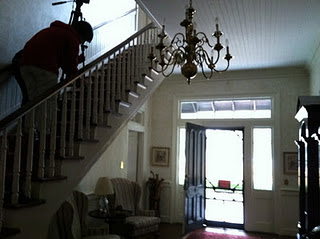 6) "I'm not a character.  I'm a scaractor," says Jude in the midst of a "Making of" interview.  A football player, Jude chiefly acts with his eyebrows and his forehead with lots of squinting and rubbing his eyes. He has been working hard, but he distinctly does not enjoy the tender reunion scene that includes this dialogue:

Fiona: "Jude, you can't leave me like that again.  I don't want my closest friend getting hurt."

Jude: "I won't leave you, but we have to get out of this house."

I get the impression that he would prefer to not to have to look meaningfully into her eyes. We end up having to shoot this take over and over, more than ten times, with Jude getting more exasperated throughout. I tell him this is the reason why major movie stars earn 12 million dollars a picture.  Jude replies, "I would cut off my leg for 12 million, and buy myself a new one."  He also says he's going to "Tebow after this." Whenever I say anything critical about Scooby Doo, Fiona says she loves the show.  She finds the The Black Knight museum episode was especially scary.

7) By yesterday afternoon, the crew shot a nice action scene in which the two stars ran the length of a house (with two crew members following close behind, and the "Making of" director behind them) before a door slams and Fiona screams.  The movie contains several moments where ghosts (?) bang on or slam doors (using fishing line).  At one point, I slammed the front door so hard, plaster fell from around the windows. The owner (standing right next to me) was saintly nice about it, but if it had been my house, I would've kicked everyone out, especially since we were supposed to be finished the day before.

At one point, a door slowly shut by itself right after a take.  We figured the Captain, the original owner of the house, wanted to be included in the shot.

8) This afternoon, I read Portis' True Grit in the parlor as Fiona repeatedly gasps hysterically, twirls around, drops the photograph, and falls on the floor in the main hallway as the cinematographer lies on the floor with the camera and the two ghosts (with lighting equipment) contemplatively chew on some brownies as they look on. Everyone is eager to finish. Jude even points out in an interview that "The promise of getting done is a good motivator," although I have heard some talk that perhaps he has been intentionally been a difficult in a diva-esque way today. Jude claims that "Acting is very hard, and people don't know how hard it is." 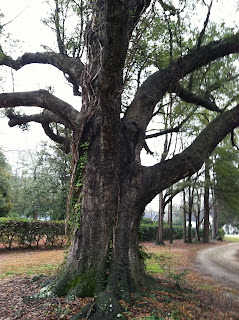 When asked how she gets herself to look scared, Fiona confesses that she thinks of "horrible things, like heights and terrorists."  Both actors have much respect for the director, whom they call "Mein Fuhrer."

Late on the last afternoon of principal photography, we reshoot the first scene when Fiona and Jude walk into the house for the first time.  Then, we keep waiting for the director to say "That's a wrap," but first she and the cinematographer have to shoot another scene of the front of the house, and then get some more outdoor room tone (nature tone?) out back.  So, when she finally says the phrase in the bus, the moment ends up being a bit anticlimactic.

9) Over the weekend, the students found that mixing the sound, especially music, proved trickier and more time-consuming that editing the video.  They worked until 11 every night in the classroom.  Today, they just needed for Fiona to scream into the mic and then loop the scream for the last scene.  As they edit, we spend part of the time studying the symmetrical composition of each shot in the new trailer for Wes Anderson's Moonrise Kingdom.  By this afternoon, the students were done and making copies.  For whatever reason, (lack of competition between groups? a perfectionist director? a detail-oriented cinematographer?) the class went especially well this year. I feel fortunate to have been involved.
Labels: Entrapment video production notes