Video production weblog: Day 6--the bodies above the ceiling 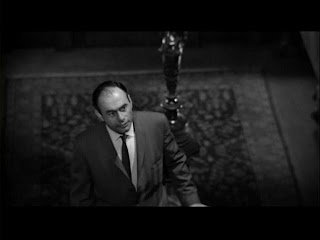 Now on the evening of the sixth day of the video production class, the students just finished their first long day of shooting at a very old manor that once presided over 5000 acres. Some notes from my Moleskine:

1) "My father did get some hog's guts and they will bring them Wednesday unless we need them sooner.  I'm not sure of the amount or variety of the guts but if we aren't going to use them we need to let him know so he can dispose of them."  --an email from Fiona, one of the stars of the film.

2) They may be in the midst of making a horror film that veers perilously close to Scoobie Doo, but the class does have a fashion sense.  On the day devoted to the preproduction work of storyboarding and writing, we visited the local Salvation Army to purchase ghost outfits.  Ava found a corpse bride-esque white dress, Jude purchased a suit for $11, students often used the word "sketch," and for a moment we considered including some ruby slippers in the film somewhere as a Wizard of Oz reference. The movie will have a running gag of references to the song lyrics of "Hey Jude" as well as the song's melody played on the piano in a lower key. We also worked on the legend of the manor that may serve as a hook:

3) During the Civil War a family of four called the Whitakers lived in this house. When Sherman’s men came through the area, the Whitakers knew they had to protect their children. They hid their daughter Ava and their son Jeremiah in a crawl space in the ceiling, and pushed a bookshelf underneath it to ensure their children wouldn’t be found. The parents had intended to return to the house and free their children, but they were killed during the soldiers’ raid. After about a month, Ava and Jeremiah were assumed to have starved to death. However their bodies were never found.

4) [From today] After reviewing the storyboards and watching the Arbogast murder scene of Psycho, we have arrived at the house.  The weather is cold and wet, but not exactly raining.  The crew has just moved from the main hallway to the parlor, and they're setting up lights. Two of the crew members wear ghoulish makeup, and one (the corpse sister) will carry a boom mic for much of the afternoon.

"What kind of speed are we going?" asks Fiona.

"We can see their shadows a little bit."

"We both have shadows.  I do have a soul, still," replies Jude, who wishes to be called Broseph Chillson.

"This house does give me the creeps." 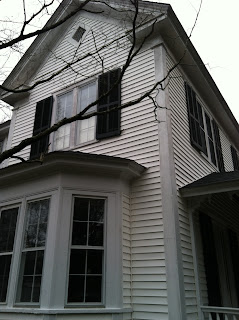 5) As the day goes on, I tend to wander off and read Will Hermes' Love Goes To Buildings on Fire in a foyer where the windows have reddish mold down by the oriental rugs. I keep waiting for Hermes' description of the Talking Heads playing their first gig at CBGBs  in the 1970s New York music scene: "Chris Frantz, a young drummer, and his girlfriend Tina Weymouth, a painter, moved into a loft at 195 Chrystie Street with a friend from the Rhode Island School of Design, David Byrne.  Their plans: uncertain."

6) For part of the afternoon, I vaguely lay on a sofa in the gun room and stare up at a painting of some labradors as the students endlessly shoot the opening scene on the front porch.  It takes a long time in part because they keep having to wait for traffic to die down on Home Avenue (across the football field-sized front lawn) since this film is supposed to take place in rural isolation.

Jude: Okay, now I definitely don’t want to go in there.

Fiona: Don’t you want to see where they were hidden?
Jude: Do you really want to see two dead bodies?
Fiona: No, but you’re pathetic. A small helpless girl like me is willing to go in an empty house, but a tall brawny guy like you is too scared to even step onto the porch?
Jude: That about sums it up.

8) By the end of today's shoot, the cinematographer was reported to have danced on the driveway because she liked the spookiness of the tilting shot that moved from Jude and Fiona on the front porch up to pale Ava and Jeremiah framed in the upper window ("like an old photograph"). Tomorrow, we will return at 9 am, and once again shoot all day.

Jason Bellamy said…
So, either I'm losing my mind or there used to be another post in this series that I read over lunch on Friday. Yes? No?

Anyway, including that piece, I've thoroughly enjoyed the updates this year. Might be my favorite series, actually.

Sounds like the cast and crew are having fun learning by doing, even if they're a little cold.

I was dissatisfied with the hasty choppy writing of the post for days 7-8, so I deleted it. I may come up with a revised and extended one if the students provide a poster for the finished film.

The class has worked hard, and they should complete a decent 14 or so minute film (not to mention a blooper reel and a "Making Of" documentary) by Tuesday afternoon. We were all quite happy to finish with the principal photography and leave the manor (finally) on Friday afternoon. I don't think I've ever gotten to know one location so well, or more fully appreciated the words "That's a wrap!" The students will continue to edit, add in music, mix in sound effects, and polish the movie over the next few days.
January 15, 2012 at 8:58 AM