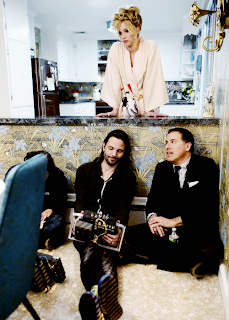 ---behind the scenes of The Wolf of Wall Street

---"All years are terrible years; the predicament of being human tends towards the negative. We read the news and are left feeling nothing more noble than 'only I have escaped to tell thee.' A given year can be pronounced good only in a solipsistic sense."  --Teju Cole

---"Under the Circumstances: 12 Years a Slave" by Jason Bellamy

---"What the public needs to understand is that the video provided by a drone is not usually clear enough to detect someone carrying a weapon, even on a crystal-clear day with limited cloud and perfect light. This makes it incredibly difficult for the best analysts to identify if someone has weapons for sure. One example comes to mind: 'The feed is so pixelated, what if it's a shovel, and not a weapon?' I felt this confusion constantly, as did my fellow UAV analysts. We always wonder if we killed the right people, if we endangered the wrong people, if we destroyed an innocent civilian's life all because of a bad image or angle." --Heather Linebaugh

---"Turning Point: The Year in Video Essays" by Kevin B. Lee

---"American Hustle and the Art of the Homage" by Bilge Ebiri

---"The IPCC report suggests that we can expect a generalized shifting of global rain patterns further north, robbing areas that now get plentiful rain of future water supplies. History shows us that when food supplies collapse, wars begin, while famine and disease spread. All of these things, scientists now fear, could happen on an unprecedented scale, especially given the interconnected nature of the global economy." --Dahr Jamail

---"There are a handful of firms still holding out and doing the whole yelling into the phones while wearing Armani suits thing. A big one was taken down this past summer, but the brokers simply jump to a new firm and start all over again. These days, they can’t take inside rips in penny stocks, so it’s more about churning accounts using real stocks or selling clients private placements. There’s a good chance you’re talking to a boiler room broker if his office is actually located on actual Wall Street. But these guys are dying out. Their licenses are swiss cheese and potential suckers don’t answer their landline phones anymore anyway – hard to con someone over the phone you can’t get in touch with. It’s been over for a while but what else are they going to do?" --Joshua M. Brown 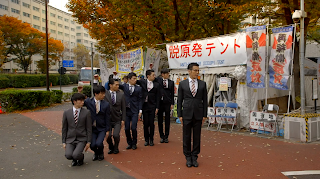 ---"What eludes Mr Snowden – along with most of his detractors and supporters – is that we might be living through a transformation in how capitalism works, with personal data emerging as an alternative payment regime. The benefits to consumers are already obvious; the potential costs to citizens are not. As markets in personal information proliferate, so do the externalities – with democracy the main victim.

This ongoing transition from money to data is unlikely to weaken the clout of the NSA; on the contrary, it might create more and stronger intermediaries that can indulge its data obsession. So to remain relevant and have some political teeth, the surveillance debate must be linked to debates about capitalism – or risk obscurity in the highly legalistic ghetto of the privacy debate." --Evgeny Morosov

--"the devil comes with a smile, you know? That's the idea, you know? The confidence man's got the charm! [laughs]"  --Martin Scorsese
Labels: Notable film and media links