Heteronormative dread and rain-streaked glass: a discussion about Carol 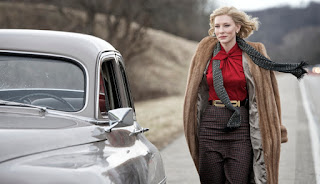 In freezing cold Charleston recently, I woke up early, taking notes on various articles and posts on Carol (we saw it at the Terrace Theater). Later, B (my wife) and I discussed it after breakfast.

FD: I was blown away by Todd Haynes' Carol, especially in the way that it depicts a horror of 1950s heteronormative society, the way that men keep interfering with the love affair between Carol and Therese. Your thoughts?

B: I don't think you should be so hard on the male behavior. Haynes depicts the males fairly typically, but we notice the jarring quality because we've become privy to the female point of view of the two main characters. In most movies, the viewer doesn't know how many women dislike male attention or think that it's buffoonish. We see females going along with that level of male attention without a second thought.  In Carol we know that neither of the women wants men around at all. Yet, all the husband Harge (Kyle Chandler) wants is his wife back. All that Therese's boyfriend Dannie (John Magaro) wants is to marry the woman that he loves. We might see these behaviors differently if we weren't so trained on the perspectives of the women.

FD: Yes, but the film makes all of the men appear relentlessly intrusive, always presuming that they are in the right. There's an Invasion of the Body Snatchers feel to their sense of privilege.  For instance, Harge hires a private detective who is literally invasive.

B: Right. That's the way it is. Annoyingly, Harge and Dannie both presume that the woman's attraction to another woman is fleeting, arbitrary, and should not interfere with the way the world's supposed to be. They keep wanting to trivialize Carol's and Therese's relationship. To them, it's just a momentary urge that can be overcome. It can't be anything as important as a love a man has for a woman. If Carol had fallen in love with a man, there would have been a lot more testosterone tossed about. The male characters assume that the women may, in a sense, temporarily become vegan but they will return to the meat soon enough.

Meanwhile, Carol and Abby (Sarah Paulson) have a friendship that was once a lesbian affair. The film has lots of nuances in its portrayal of women's relationships.

FD: What did you think of Haynes' painterly visual strategy of depicting Carol and Therese' point of view through rain-streaked glass, such as in the windshield of cars.

B: One of my favorite examples of that is Therese's first car ride where Haynes dims the sound of Carol's voice and we see the green light in a tunnel as if in an acid kaleidoscope. The color scheme reflects Therese's sexual awakening. Carol's colors are always sleek and bright, with a lot of bright red. Therese's colors tend to be more somber, so that's why Carol admires Therese's red Santa hat. In comparison to Carol, Therese lives in a more somber world, at least at first. The rain, of course, is part of that. Therese often spends New Years Eve alone.

FD: Therese says that she feels obliged to take an interest in people as a subject for photography.

B: Yes, Carol becomes the first person that Therese has met that is worthy of being photographed. Part of that is when you fall in love for the first time, people can seem more interesting. 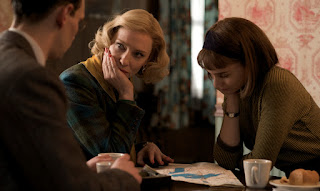 B: She also encourages Therese to open up to people emotionally and intellectually. In some ways, Therese is the hard nut to crack. Carol is coded, but her emotions are more on the surface. There's always a tension in any story about same sex attraction because the seduction is different. Carol is the aggressor, in a way. She's on the look out for likely relationships.

B: Is Therese going to allow Carol to seduce her? Or is Carol in love with Therese because Therese is ostensibly straight? The will-they/won't-they uncertainty wouldn't appear in a heteronormative relationship in the same way.

FD: You get something of the same story structure in a romantic comedy where there's a gulf between the two principle figures, only in that case they tend to dislike each other at first.

B: Or there's some reason why they can't be together.

FD: In the Eisenhower 1952 era of Carol, everything about society at that the time (legal, class-related, psychological) forbids Carol and Therese's relationship to the point where the husband Harge evokes a morality clause against Carol in their divorce proceedings. Why do you suppose that Haynes' evocation of that era works so well today?

B: Haynes portrays a relationship between two women as the main point of the film, which is still unusual. Often, in films like Allen's Manhattan (1979), that kind of affair is seen as a comic side note, whereas in Carol, the opposite is true--the men and the family connections are often extraneous. The totality of Carol's and Therese's point of view implicitly refutes the society of the time. Rindy (Carol's daughter) of course is important to Carol, but women have been struggling with how much of their lives they owe to their children since Kate Chopin's The Awakening (in 1902) and before. As Edna says, I would die for my child, but I will not give up my life.

FD: What did you think of the age and class gulf between Carol and Therese?

B: The two have their differences, but Carol ultimately proves a mentor and guide for Therese. There's also a Pygmalion quality to their relationship.

FD: Perhaps that's why Therese's Audrey Hepburn-esque jumper looks so appropriate, because of her work in My Fair Lady.

B: Right. I love all of the close ups on Therese' and Carol's faces. The details are so significant. Blanchett's eyes are almond shaped and dark. Her nails are red and glossy during the car trip, but later, afterwards, the nails become uncolored and bitten, reflecting her subsequent anxiety. You could say Carol's gloss, her tendency to wear attention-seeking colors, reflects her adaptation to her upper crust world. In contrast, Therese is often associated with a troubled blue coloring, which reflects her relative misery, taking pictures instead of living. 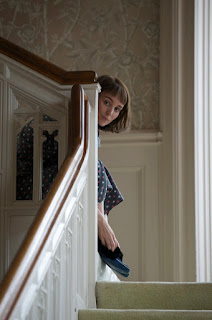 FD: Good points. As Blanchett said in an interview, "There are so many secrets, codes, and forbidden topics and taboos that exist between the women of Carol." The movie is both ravishing and endlessly intellectually provocative even as it conveys a dread of society's heteronormative assumptions.

B: Maybe the movie resonates because it hints at how much of our lives are under the ice, how much of a person's individual world is left unstated and unknown. Haynes' movie shows us how we miss so much of it. Carol illustrates a love that dare not speak its name (given the time period), but that can be true for any relationship, if we just bother to look.

---"All too often, the central dramas or compulsions of female characters depend on men"--Phyllis Nagy

---"To convey the emotional state of the characters, Lachman added that he also 'shot through windows, elements of weather, through reflections, to defuse the image and obstruct the frame. You see Rooney Mara in the taxi through the window or Carol in a diner through a window, kind of a way of visualizing what is happening to the characters. You understand that the character is seeing through the obstacles, expressing something about their emotion that’s being hidden but also visible. Their affection toward each other and consummating their relationship would have been a great taboo in that time period.'"

---"And we see all these shots through glass and reflections, windows, and where almost the lens itself, the act of looking is foregrounded because it’s all about desire and who is on what side of that looking.”  --Todd Haynes

---"Too many filmmakers (and definitely too many TV show runners) dilute the impact of their stories by indulging them, treading in their waters rather than controlling their currents. Carol has the kind of concentrated pacing and tight crystallization of character arcs through images that you only get in cinema when the creative team is keeping it tight and understands that they are not making visual epic novels or comic books but visual short stories. You only have these series of shots alone to tell a full satisfying story. And they're going to tell it in such a way that you give the audience abundant room to build their own extensions -- miniseries, prequels or endless franchise installments -- in their imagination from how rich the images and implications are and how deeply the characters resonate." --Nathaniel R

---"I do love that strange sort of linking of the homoerotic and the criminal in her work. Almost always male homosexuals are the subjects of that kind of alliance, and I do find that to be really fascinating. It doesn’t paint this positivist portrait of homosexuality, at least among men. There’s an unmistakable sort of fixation on it, and a way in which covert desire has to be transformed into something else. The two themes are always running in parallel with each other and unspoken about — or almost nearly unspoken, because it’s so prevalent in the work. It bristles through the Ripley stories and, obviously, Strangers on a Train and many [others] I’ve read. That desire, that instinct to tell a story about desire always having to be disguised, a desire that at some level is antisocial — I think, in that way, even The Price of Salt has to be included in that taste or tradition of hers."  --Todd Haynes