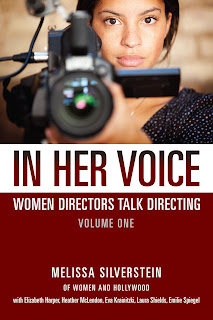 Today, we were very lucky to have O. K. Keyes come by to discuss her career as a cinematographer and educator. She discussed this movie Crosswalk shot by shot. She pointed out how many of her color effects and individual shots of the movie came from strategic choices that she had to make with sometimes lesser materials (like a porch light that she couldn't turn off, or a projector combined with cheap colored lights from Wal-Mart). I like the many ironies of the short movie, especially the way it ends with a traditionally happy long shot of a house in sunlight.

Keyes not only taught the class much about cinematography, she supplied me with superior sample shot lists, storyboard forms, shooting schedules, and script breakdown forms. As the students worked on their action video concepts, Keyes quickly refined them, pointed out ways to unify them through transitions, and also discussed the ways that they so easily slip into gender stereotypes in their first narrative attempts. Due to everyone's immersion in media these days, an image of a woman being strangled can have all kinds of implications that the class in its screenwriting innocence may not be conscious of. Does the superhero in this scene have to be male? Why does the female character automatically appear weak? Why do both production groups happen to include someone being mugged in their first movies? Is there some sort of paranoia at work here? On a larger scale, why are there still so few female cinematographers and directors?


Crosswalk from O.K. Keyes on Vimeo.

Later in the afternoon, the two class groups went their separate ways to scout locations and take some preliminary footage. I went off with Pacific Pedant Productions (I think that's the name) as they tried out some of their GoPro footage in a soccer field and a women's bathroom. Naturally, when they tried to get some sound of the water running in the sink with a Canon t3i, someone turned on a vacuum cleaner in the hallway, mucking up their shot. I said that's why directors like the control of a quiet studio. 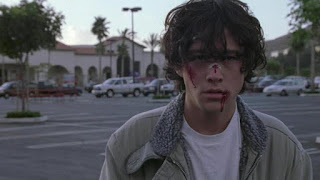 Tomorrow, both groups will attempt to finish shooting their action videos before we talk to another alumnus who now produces TV shows in Hollywood (writing and directing indie films on the side).

My colleague Joe ended things with this email to the students to help prepare them for tomorrow:


Below are links to a couple well-done chase scenes you might take inspiration from.

The scene from Brick is a better one to emulate for your own projects: it's more well-composed and tightly-constructed, and shows how you can create a really terrific sequence without any flashy effects or high-budget items. Hot Fuzz shows a different, entertaining approach.

For Brick, take note of:
For Hot Fuzz, a very different tone is set with use of saturated color, ultra close-ups, faster pace of editing, whip-pans and zoom shots (generally these are cheap tricks, but they're done for humorous effect here), and chaotic shifts in the axis of action.