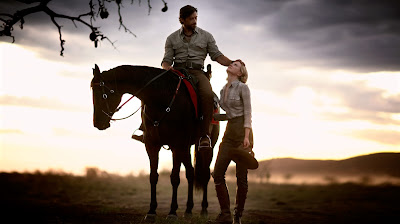 "`And I will hear you, my darling!' Monstrous!"
--from my notes while watching Baz Lhurmann's Australia.

My initial reaction to sitting through the 2 hour and 45 minutes of Australia wasn't just negative, it was viscerally full of hate. As a fan of Luhrmann's Romeo and Juliet, I felt used. Even though I recognized the beauty of many of the film's shots and the epic sweep of the director's ambition, Australia struck me as emotionally manipulative, especially in the way it arranged to have characters seem to die off just so Luhrmann could stage later tearful reunions. And the film's structure seemed terminally wrong. The narrative reaches a happy conclusion within two hours, but then the story continues just to include the Japanese attack on Darwin. At first, my reaction squared reasonably well with Dana Steven's delightfully acerbic review for Slate:

"It's a mystery to me how Baz Luhrmann continues to be regarded as a director worth following. A long time has passed since I've regarded his lush, loud, defiantly unsubtle output with anything but dread. In Australia, his new romantic-epic-Western-protest-war drama, Luhrmann's dedication to cliché has become so absolute, it starts to verge on a kind of genius. There's not a single music cue that isn't obvious (swelling strings to indicate heartbreak, wailing didgeridoo to signal aboriginal nobility). Nary a line of dialogue is spoken that hasn't been boiled down, like condensed milk, from a huge vat of earlier Hollywood films (Gone With the Wind, The Wizard of Oz, Out of Africa, and various John Ford cattle-drive pictures being the most obvious referents). But to marvel at the purity of Australia's corniness isn't to imply that the movie functions as so-bad-it's-good camp, or guilty pleasure, or anything else involving aesthetic enjoyment. Audiences without a vast appetite for racial condescension, CGI cattle, and backlit smooches will sit through Australia with all the enthusiasm of the British convicts who were shipped to that continent against their will in the late 18th century."

But then, as the week has gone on, I've found myself brooding more and more about Australia. After watching the regurgitated, uninspired, and bland Luc Besson confection Transporter 3, I still kept parsing the various movie references in Australia. Even though Nicole Kidman appears to be working awfully hard to act as high-strung Lady Ashley, one can spend all day thinking of other film versions of neurotic citified women who are saved by living in the country (and/or by their encounters with strong, gruff men): Jane Fonda in The Electric Horseman, Claudette Colbert in It Happened One Night, and Katherine Hepburn in The African Queen.

Then, this morning, I found Bill Wyman's defense of Australia in his Hitsville blog. I especially liked his discussion of Australia's use of Gone with the Wind:

"As for GWTW, it’s programmed right into that barebones plot: The endangered homestead, the uptight rich woman who gets her hands dirty to save it…

… all set, of course, in a morally compromised world. Luhrmann is foregrounding race even while patterning his film on Hollywood’s most famous film not to do so. The way of life Scarlett and her world watch crumble before them is a notoriously romanticized one. Luhrmann knows there’s little talk of what the South was really fighting for in Gone With the Wind; here, with his focus on the way the Australian government handled the country’s Aboriginal population in general and half-caste kids in particular, he had to confront not just the practice itself, but the way pop culture became complicit.

Seen that way, Australia is a mirror film, both exploring and exploding the history of the movies. It is a western that isn’t set in the American West, a musical with no songs, a war movie to which war comes as an afterthought. As Nullah [the child narrator of the film] watches The Wizard of Oz, he goes through the mirror entirely, a half-caste kid forced to see it in blackface, a sobering reminder of how even movie theaters were complicit in our racist past."

So what do I think now? Can one in good conscience reconsider one's original dislike of a film? Or am I just enjoying the analysis so much that I'm forgetting the unpleasant experience of watching the movie itself? In the end, Australia is highly annoying, thought-provoking, and encyclopedic in its allusiveness all at once. It may be schmaltzy overblown balderdash, but it does linger in the mind.

Dead Pan said…
This same type of thing happens often to me. I leave the theatre ready to murder the director with my words in a review, then I see a review that shines some light on some things I hadn't considered about the film and gives me a new appreciation.

The only way to tell if your perception of the actual film will have changed would be to rewatch, and if that sounds to laborous then I would suggest that your initial thoughts are probably right. =)
November 29, 2008 at 2:34 PM

The Film Doctor said…
I think you have to stick to your initial impression of a film as a reviewer, but Australia has so many cinematic techniques and allusions, I enjoy trying to figure them out. For instance, when Lady Ashley and the gang head off into the desert and almost certain death, that's similar to a scene in "Lawrence of Arabia," another epic film. It's also interesting to see a film that cheerfully alludes to so many American films of the late 1930s. It invites you to consider correspondences in the history of both Australia and the US in terms of race, gender, and as former colonies of England.
November 30, 2008 at 8:59 AM

Anonymous said…
Luhrmann's conscription of Puccini's LA BOHEME was worthy enough, and I have always admired MOULIN ROUGE, so I went in with a little more confidence. Sure AUSTRALIA is uneven, unfocused and overlong, but in spite of all the excesses, it still works as a modest entertainment. I enjoyed your review, and your thought process in re-evaluation, as well as the GONE WITH THE WIND parallel; an exemplary essay. The film would be making any ten-best lists, but it's innocuous enough, methinks.
December 27, 2008 at 11:22 AM

The Film Doctor said…
Thanks, Sam. Australia ultimately struck me as almost perversely admirable in the extremity of its mistakes. I was mostly conflicted due to the beauty of some of the cinematography (but not the special effects) and the many classic film allusions. Otherwise, I am still astonished that someone didn't change the screenplay before it was too late. It could have been so much better with more editorial restraint.
December 27, 2008 at 1:38 PM