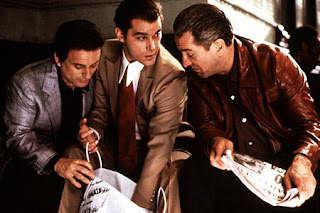 I have been too busy directing a play to get much writing done, but here are some of the better posts I've seen of late:

---Writing for Slate, Dana Stevens celebrates the Peanuts holiday specials, including, as she puts it, "A Charlie Brown Christmas (in which Charlie tries, and fails, to direct a single rehearsal of a Christmas play)." I can relate.

---As part of his 31 Screams series, Arbogast skillfully analyzes the shower scene of Psycho: "Janet Leigh's murder 48 minutes into Alfred Hitchcock's PSYCHO (1960) changed the fright game forever - more than 60 years after the creation of cinema (and horror movies), PSYCHO achieved instant "first principles" status. It is a seminal text. It is Chapter and Verse. So many of us under the age of 50 knew that going into our first viewing of it, born as we were in the first post-PSYCHO wave (does that make us Psycho Boomers?) that it's almost impossible for us to fully appreciate the suckerpunch Hitch threw at audiences of the time."

---Whatever happened to Debra Winger? I remember Pauline Kael proclaiming her a better actress than Meryl Streep. Now, thanks to Rachel Getting Married, she may be back.

---Who are the Manic Pixie Dream Girls? Neda Ulaby of NPR seeks to explain.

---Writing for Time, James Snyder reviews Scorsese by Ebert. Here's a sample from the book concerning Goodfellas: "[Henry Hill] loves it when the head waiters know his name, but he doesn't really have the stuff to be a great villain ... he wants the prizes, but he doesn't want to pay for the tickets. And it's there, on the crux of that paradox, that the movie becomes Scorsese's metaphor for so many modern lives. ... He simply uses organized crime as an arena for a story about a man who likes material things so much that he sells his own soul to buy them."

---Wait a second, I just wrote that Snyder published his review in Time magazine. Does that mean there are still writers working for magazines and newspapers? The New York Times' David Carr laments the decline of print media: "Stop and think about where you are reading this column. If you are one of the million or so people who are reading it in a newspaper that landed on your doorstop or that you picked up at the corner, you are in the minority. This same information is available to many more millions on this paper’s Web site, in RSS feeds, on hand-held devices, linked and summarized all over the Web." Unfortunately, most of the money is made from the print product.

---Writing for Culture Snob, Jeff Ignatius decries the "bad writing" of David Thomson's "Have You Seen . . . ?" As he notes, the book "reads as a collection primarily composed of lightly revised first drafts; some entries look like little more than transcribed notes. Thomson pays little attention to his leads or his closings or the shape of the essay or argument, instead skating by on his frequent bursts of brilliance.

There is greatness here, buried in bland."

---Lastly, I liked A. O. Scott's video appreciation of Night of the Living Dead.
Labels: Notable film and media links