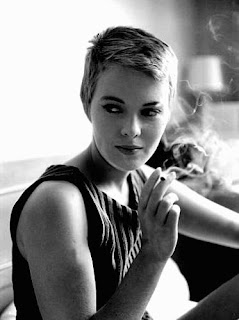 ---Writing for The Guardian, Wyatt Mason explores in "The Beautiful and Damned" how Tennessee Williams turned film into a "writer's medium."

"Jean Seberg was the American girl in Paris, the symbol of the Free Spirit and part of the French New Wave which produced "Breathless," a groundbreaking film that changed filmmaking forever. She hasn't received the credit she is due for being part of that change, or for helping people in the film industry with their first film or granting seed money for a film project. Few "stars" do that.

She was perhaps the first American-born actress in the sound era to work on several European productions without the comforts and constraints of the Hollywood system. She popularized the short hairstyle years before Mia Farrow (who gets credit for the style).

She was sensitive and helped people in need. She could speak four languages, and dined with both presidents and revolutionaries. She was a unique and gifted performer. And for some very strange reason, she hasn't been embraced in her birth country – let alone her home state – as she has around the world."

---Krista Smith's Vanity Fair profile has Kate Winslett talking about everything from her former days as a "fat kid" to an "acne problem" on her chin, but I was most interested in her participation in Revolutionary Road and The Reader, two films to be released this December.

--Writing for The Cooler, Jason Bellamy wraps up his Politics and Movies Blog-a-thon with many excellent posts that range from "The Best Recent Political Documentaries" by The Moviezz Blog to Movieman0283's "Election Overlook."

"Playtime could be a a dystopian vision of a world whose modern irritations are pestilential, maddening headaches of faulty gadgets and redundant babble. But [Tati's] too generous for that - instead he shows their absurdity, and then suggests how changes in perspective can defuse their power to confound."