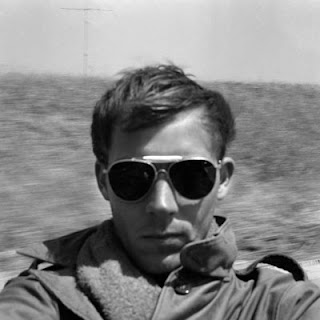 . . . the edge is still Out there. Or maybe it's In. The association of motorcycles with LSD is not accident of publicity. They are both a means to an end, to the place of definitions.
--Hell's Angels: a Strange and Terrible Saga

1) After sitting through the endless dreary scenes of people sitting around campfires and reminiscing about the Clash in Joe Strummer: the Future is Unwritten, I had my concerns about Gonzo: The Life and Work of Dr. Hunter S. Thompson, the new documentary directed by Alex Gibney (of Taxi to the Dark Side). The internalized lives of writers often do not lend themselves to film treatment, and since his suicide by shooting himself in the head in 2005, Thompson would seem a particularly iffy already hyped-to-death subject. But thanks to much little-known footage of Thompson over the years, Ralph Steadman's drawings, and Gibney's specific emphasis on politics, this documentary proved surprisingly engaging. I didn't mind the baby boomer indulgences such as the repeated claim that the San Francisco scene in the early sixties was the best period ever, not even Jann Wenner of Rolling Stone tearing up when he talks of losing his old friend.

2) Before he became a cartoon version of himself, Thompson grew up in lower middle-class Louisville, KY. He worked as a straightforward freelance journalist for years before hitting upon the gonzo formula when collaborating with Ralph Steadman on "The Kentucky Derby is Decadent and Depraved" for Scanlan's Monthly magazine in 1970. By drinking enough bourbon, ignoring the horse race altogether, and focusing on the lewd, deranged antics of the crowd, Thompson found his metier. From then on, drugged misbehavior often became the story for Hunter, a form of self-mythologization, and he produced his masterpiece Fear and Loathing in Las Vegas for Rolling Stone in 1971. Gibson was lucky to have the Johnny Depp/Terry Gilliam 1998 movie version of that book to borrow scenes from, and it's funny to see a little footage of Bill Murray duking it up in Where the Buffalo Roam way back in 1980.

3) I found myself analyzing the Gonzo uniform. Why a cigarette holder? Perhaps he was referring to the snotty rich folk back in Louisville? Why did he often wear shorts, even in the winter of Aspen, Colorado? The colored shades, I imagine, were to cover up the redness in his eyes. I also liked Thompson's hipster preference for white Converse sneakers, often without socks. His outfits often suggest a frat brat using a preppy look to disguise his drugged symptoms.

4) Who would've thought that George McGovern, Jimmy Carter, Gary Hart, and Pat Buchanan, of all people, would have warm things to say about Thompson? I didn't realize that Thompson's massive support for Carter helped him gain the presidency. Gibson also draws parallels between the Iraq and the Vietnam war, with McGovern looking surprisingly relevent in this context.

5) Given all of his success as a journalist, Thompson remained a wannabe novelist. As the documentary points out, as a young man, Thompson would write scenes from Fitzgerald's The Great Gatsby over and over to get a sense of the rhythm of the language, and there's a certain pathos in his novel The Rum Diary not getting published until 1998. With his emphasis of hallucinations and derangement, Thompson still needed a measure of personal reality to build his books upon. Yet, it's funny how his coverage of political campaigns seem more accurate through his distorted, more personal lens.

6) Like watching a bloated Elvis work his way to his final visit to the bathroom, the Gonzo's later years have a sickly fascination. How can one tell he has reached a point of total drugged-out decadence? In one video taken by his second wife, we see an elderly Thompson staring at an electric typewriter while repeatedly playing Elton John's "Candle in the Wind" at top volume. He was visiting with Jimmy Buffet down in the Florida at the time. If that doesn't spell total depraved exhaustion, I don't know what does.
Labels: Hunter Thompson

Stacia said…
Great write-up. I've been wanting to see this documentary myself, but also had reservations about it. I don't know what to think of Thompson, as his seminal work was written the year I was born and, by the time I knew who he was, he was "old news". And I'll never forget his words on George W Bush in the 2004 election, where he essentially said what the U.S. really needed was another Nixon to rescue us.
November 29, 2008 at 2:32 AM

The Film Doctor said…
Thanks, Southern Illinois. The film reflects Thompson's politics by leaning leftward, but it tries to even things out a little by interviewing Pat Buchanan.

Thanks for your comment, Stacia. In a sense, Thompson needed Nixon as the perfect villain. The film also hints at the possibility that Thompson may have committed suicide in part due to Bush's reelection in 2004.

If you check out his earlier work in The Great Shark Hunt, you can enjoy Thompson's journalism before he became such an icon of druggy revolt. At any rate, I have always admired his passion for writing.
November 29, 2008 at 9:26 AM