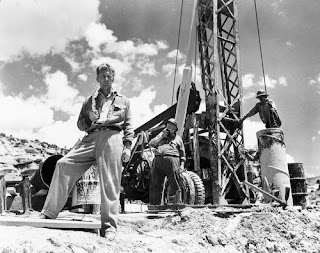 We're coming, we're coming, Leo
Oh Leo don't despair. While
You are in the cave-in hopin'
We are up above you gropin'
And we soon will make an openin'.
We're closer, we're closer, Leo
And soon you'll breathe fresh air
While you are in the devil's prison,
Keep the spark of life a fizzin'
We'll soon have you out of prison, Leo.

1) When I first watched Ace in the Hole last year, I was stunned. I watched it again. I’ve been watching it with semi-obsessive interest ever since, and I’ve heard that it is one of the favorites of Sam Peckinpah, Spike Lee, and Woody Allen. Ace in the Hole is rare in that one never seems to get to the bottom of its cheerful cynicism, the ferocity of its unfunny Mad magazine ridicule of American emptiness, arrogance, cultural imperialism, and gullibility. Adapting the story of the media circus created around Floyd Collins, a man who got stuck in a cave in Kentucky in 1925, Billy Wilder trains his satire directly at the audience, the popcorn-crunching crowd eager for amusement, so naturally the film was a bomb (but not in Europe, of course).

2) Ace in the Hole concerns a down-on-his-luck big city journalist, Chuck Tatum (Kirk Douglas) who reluctantly takes a job as a reporter for the Albuquerque Sun Bulletin in so that he can find one big story to connive his way back to . In a way reminiscent of Bridget’s attitude towards “cow country” in The Last Seduction (1994), Chuck endlessly disdains the empty provincialism of Albuquerque, but one day he stumbles across a man, Leo Minosa (Richard Benedict) trapped inside of an Indian burial ground of a mountain. Enlisting the help of Leo’s peroxide blonde wife (Jan Sterling), Chuck writes up Leo’s plight in the newspaper in such a way that the entire US takes an interest. Soon, crowds of people from all over visit the front of the mountain with Day of the Locust-like morbid fascination. When the media circus is in full swing, Chuck notices that his cynical plan to drag out the rescue effort by drilling down from above (thus increasing the value of his story) will lead tragically to Leo’s death. He could have arranged for men to shore up the walls and get Leo out much more quickly, but then he couldn’t have developed enough suspense to get transfixed. Besides, the big drill has a sense of sexual potency, oil-pumping flair, and Biblical top-of-the-mountain drama that any regular rescue technique cannot compete with. The end of the film is not at all pretty or pleasant, but it is fascinatingly grim. Chuck releases forces that he cannot control, and he feels remorse for his attempt to capitalize on Leo after his death.

3) Why is the film hard to reach conclusions about? For one thing, the drill never does get to Leo. He dies several days when it is only (roughly) ten feet away. In the same way, I find it difficult to get to any final analysis. The film eludes us just as the final significance of death is difficult to pin down. Wilder skillfully juxtaposes the Leo's plight with blithe amusement park music going on outside, perpetually playing the ghastly melody of the trite “Leo” song quoted above, as people ride the Ferris wheels and buy balloons. He implies that Americans are so besotted with amusement, they cannot begin to recognize death even as it forms a basic staple of their entertainment. Leo’s suffering serves as a pretext for a party, not that anyone, except his relatives (and, to be fair, increasingly Chuck), gives a damn about him anyway.

4) Not only are Americans ridiculed for their endless quest for distraction, they also thrive on exploiting each other. Thus, aside from Chuck’s cynical use of Leo, the local sheriff Kretzer (Ray Teal) proves easily corrupted to join Chuck’s scheme to help with his reelection. The head of the rescue team gives in to Chuck’s and Kretzer’s bullying to keep his job. For her part, the delightfully cynical and noir-bitchy Lorraine recognizes that there’s money to be made at her and Leo’s nearby hamburger restaurant and hotel, not to mention the S & M Amusement Corp who works out a deal to bring the fair to the mountain. Why does Wilder call it S & M? Perhaps because everyone sadistically takes pleasure in Leo’s suffering. Also, there’s a S & M quality to Lorraine’s and Chuck’s relationship, since she’s sexually attracted to his macho manipulations, and his disdainful use of her gets increasingly violent until she stabs him with some scissors.

5) In the excellent Criterion Collection DVD commentary, film scholar Neil Sinyard points out how one can interpret the Leo song in sexual terms. The song ironically celebrates Chuck’s and ’s sordid adulterous “gropin’” as he hopes for release. One could make the argument, however, that everyone at the circus is more in “the devil’s prison” than Leo. At least Leo can face the fundamentals of life and death. Like the boys at Pinocchio’s amusement park, the crowd of the media circus are too distracted to face anything.

6) I enjoy Kirk Douglas’ performance too much to think him as a simple villain, especially since he shows major signs of remorse as the film goes on, and he partially redeems himself by bringing a priest to Leo for his last rites. Oddly, the real villains of the movie are the quintessential American family couple, the Federbers. They are ordinary tourists who show up first to park their mobile home by the mountain. Their son wears an Indian headdress. They eat hot dogs and ride the Ferris wheel. When getting interviewed on the radio, Mr. Federber insists that they were there first, and he also tries to sell insurance. They mean well, but their quest for amusement amidst Leo's entombment makes them perhaps the most responsible for his death. When the story breaks down with Leo’s death, they all go away in despair.

7) When one considers the satire on American cultural imperialism within Wilder’s Austrian vision, one can dwell on how Chuck rudely says “How” to a Native American working in the newspaper offices. The Native American responds with “How do you do, sir,” but all too often, everyone (except for Leo) ignores any notion of an alternate older culture in the area, or the sacredness of the Native American burial ground except when it suits Chuck’s angle for his articles. Americans come off as arrogant cowboys quite happy to befoul, pollute, and drill into the desert. Little wonder that the spirits reply by killing Leo off.

8) In the end, I don't why I like this film so much. It is desert-bleak, savagely sardonic, and full of contempt, and yet Ace in the Hole still seems truer to the underside of the American spirit, even today, than any other 1950s film.

Anonymous said…
Excellent commentary on a film that I had never heard of before.
November 9, 2008 at 8:03 PM

The Film Doctor said…
Thanks, anonymous. You may not have heard of it because the Criterion DVD version of Ace in the Hole just came out last year.
November 9, 2008 at 9:59 PM

Joel Bocko said…
Good review - I saw this on TCM a year or so ago, right around the time it came on Criterion. It's definitely one of Wilder's strongest films.
November 11, 2008 at 11:10 AM

The Film Doctor said…
Thanks, Movieman. Ace in the Hole is one of Wilder's most uncompromising films, and that's bracing enough amidst today's releases.
November 11, 2008 at 1:09 PM

Anonymous said…
I recently saw this film on TCM and recorded the last 40 minutes onto a DVD as I was going to work. I'm glad I did as I have since become obsessed with the song, "We're Coming, Leo."

I find myself humming the song around the house and can't get it out of my mind. I simply love this catchy western swing tune.

I have been searching the internet high and low to find out the name of the musicians to no avail. In one scene I can make out part of the band's name on the drum: "xENNIE MAxxx??? & HIS ORCHESTRA" but that's as far as I got. So it's probably Bennie, Dennie, Kennie or Lennie so-and-so for starters...

Anyone have any further info on their identity? There are no good record shops in my area that would have any old western swing records so I must rely on the web for now.

I'll check back from time to time here and thanks to all in advance.

The Film Doctor said…
Thanks for the comment, Anonymous.

The Criterion DVD commentary has some mention of the songwriters of the Leo song, but I don't remember if it mentions anything about the particular musicians, and I don't have the DVD around at the moment. I find it funny how the song can be heard in a completely different and raunchier way. Poor Leo.
February 14, 2009 at 4:04 PM

Anonymous said…
Yes, I found the names of the songwriters on the net---but still no name for the band---still hunting...

Scott H. said…
Hello, Enjoyed your comentary on this film. I had not seen nor heard of it since the one time I saw it on TV as a kid in the early 60's. The recent mining rescue in Chile brought back memories of "Ace in the Hole" and that haunting song that has stuck with me for almost 50 years since. Surprising impact the story carried for me at such a young age.
Thanks,
Scott H.
October 13, 2010 at 10:48 PM

The Film Doctor said…
Thanks, Scott,

It does appear that the mining rescue operation has also captured the world media in a similar fashion to the frenzy in the movie. At least the real life story has a happy ending.
October 14, 2010 at 7:34 AM