Guns, banks, and attention to detail: notes on Bonnie and Clyde (1967) 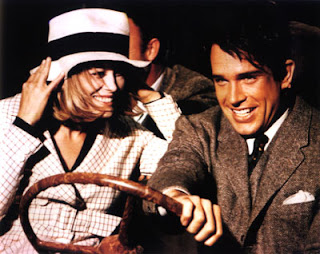 Aside from being the film that helped Pauline Kael get her job reviewing for The New Yorker, Bonnie and Clyde still strikes me as elusively brilliant. A casual glance of the story of these two yokels robbing and shooting their way to an early death would not seem to promise very much--a grungy palate of dead-end Texas towns, depression-era FDR posters, and crude, sometimes clownish dialogue. And yet, in 1967 Joe Morgenstern of Newsweek did something very rare. He reversed his opinion of the film and wrote a new review retracting what he had said before, mentioning "scene after scene of dazzling artistry." The film's craft camouflages itself within its rapid shifts in tone between comedy and violence, and, as in the case of our film class study of The Graduate, I like to tease out Bonnie and Clyde's allegiances to the French New Wave even as it looked forward to the triumphs (such as The Godfather) of 1970s American cinema.

Take the movie's debt to Godard's A Bout de Souffle. Both films share a photogenic couple engaged in a straightforward story of running from the law, but whereas Godard's film constantly winks at the viewer (with devices such as the jump cuts) into enjoying the film as a film, thus diminishing the sense of any ethical impact on Michel for his crimes, Bonnie and Clyde is more realistic. Yet, the latter film shares in the self-conscious pleasures of subversive behavior by having Bonnie and Clyde constantly photographing each other for the adoring press. Whereas Michel poses throughout his film in slightly ironic American gangster fashion, Bonnie and Clyde displays more of the confused, fearful, tender side of its murderers. In comparison to Michel's and Patricia's practiced cool, Bonnie curls up in a fetal position in bed when she realizes that Clyde is the only family she will have. And Bonnie and Clyde is very deliberate in the way it plants hints of their doom in talk of "bringing a mess of flowers to their funeral," the fact that Gene Wilder's character is an undertaker, the dark cloud that happened to cover the twosome when running across a cornfield (surely someone was thinking of North by Northwest?), the grim conversation with Bonnie's mother, and finally in the extended death scene of Gene Hackman's character Buck.

It is perhaps this sense of comedy incongruously mixed with judgment that makes the film so appealing. Aside from the temporary thrill of successful robberies, no one ever gets away with anything for long, except for C.W. Moss (and Moss perhaps gets to live because he was so childlike, fleshing out the basic "family" unit of Bonnie and Clyde. If he was punished, the youthful audience would have felt violated by his death). I like the way Blanche's blindness is prepared for by Buck taking sunglasses from a policeman during a robbery, and bragging about it--"Take a good look, pop. I'm Buck Barrow"--thereby showing how much he too loves crime, and therefore, perhaps, making him deserving what happens to him. Buck gives the sunglasses to Blanche, and we see her polishing the lens, and so on, until she' s blinded by a strafed car window's broken glass. Then, as the "family" reacts to the horror of Buck's gunshot to the head and Blanche's blinding, Bonnie ironically places the sunglasses over Blanche's maimed eyes. Also, by the end of the film, just before he dies, Clyde wears sunglasses with one lens missing, in direct homage to Michel doing the same towards the end of A Bout de Souffle.

Of course, this post is just scratching the surface of an extended analysis, but I will end for now with a question about craft. If one wonders why Bonnie and Clyde has become a classic, perhaps the answer lies in Beatty's perfectionist methods. As discussed in Mark Harris' excellent study Pictures at a Revolution: Five Movies and the Birth of the New Hollywood (Penguin Press, 2008), Beatty (as producer) and director Arthur Penn would frequently spend hours during the shoot arguing about "aspects of the script as small as which word in a line should be emphasized" or "the tone of a particular moment. A flourish, a camera angle, a reaction, a grace note--no issue was too trivial to stop both men in their tracks. `What else is making a movie,' Beatty said, `except attention to detail?'"
Labels: Bonnie and Clyde

Information on the award is here: http://cutprintreview.com/march-site-update/#Dardo

I've always enjoyed your style of writing, and you have such fantastic insight (probably because I often find myself agreeing to it!).

The Film Doctor said…
Thanks, Mattson. I imagine Bonnie and Clyde can help viewers get ready for Johnny Depp's Public Enemies.
March 6, 2009 at 1:06 PM

Anonymous said…
One of the most important and most utterly brilliant of 1960's American cinema. Yep, Pauline lost her job in another publication for panning THE SOUND OF MUSIC, but she established herself in the New Yorker with this one. And she did write a fantastic review for it!

Yep, you are as usual dead-on, comparing this to Godard's A BOUT DE SOUFFLE. (but rightly asserting that the Penn film is more "realistic" and that there is that subversive photogenic element--as well as displaying the "confused, fearful and tender side of its murderers) Nice!

And the "comedy mixed with judgement" contention is one I do agree with.

Joel Bocko said…
I really liked that book - it did such a great job of capturing the joy and agony of filmmaking - the whole process, beginning to end - while also illuminating a thrilling time in Hollywood and cultural history. It's exciting, in a way I don't think any book about today's diversified cinema could be.

The way I think about it, in the 60s most of the important technological revolutions had already happened (especially if you don't put much stock in CGI as an advance) and yet we were within a generation of Griffith and Chaplin - all that history and development and advancement squeezed into such a short period! The cinema was the most precocious of arts, having been born, established, and modernized several times over in a single lifetime - its potentials were almost all there, but it was still a fresh medium at this time, still - despite 70 years in existence and the rivalry of TV and the decline of the Golden Age - capable of seeming like a novelty, a New Art (much the same can be said of rock music in the 60s, perhaps even more so - it was just a baby among pop forms, and yet it achieved a level of sophistication so fast that it could retain the freshness of discovery alongside the maturity of art - a rare achievement, and one I fear we may not be able to repeat, in either field).
March 12, 2009 at 12:06 AM