Germany's Bonnie and Clyde: notes on the terrorist chic of The Baader Meinhof Complex 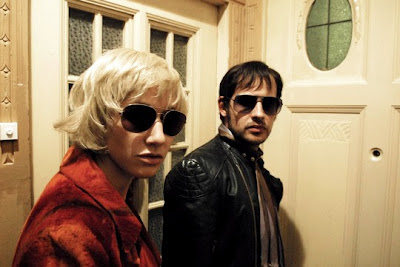 "Just write about it afterwards. That's all you're good for, anyway."
---Gudrun Ensslin rebuking journalist Ulrike Meinhof
"Despite murdering 34 people, Baader-Meinhof garnered a degree of support from about one-quarter of the West German population. Accepted if not always admired by guilt-ridden liberals, who saw its panache as a countercultural critique of West Germany’s boring bourgeois life and its association with the American war in Vietnam, Baader-Meinhof carefully cultivated an outlaw image. It wholesaled the ideal of authenticity—of acting out one’s impulses, even when murderous—in order to break through the fascism of convention, just as its heroes abroad, such as Che Guevara, broke through the iron wall of America imperialism. Drawing on its New Left counterparts in the United States, it borrowed such phrases as “burn baby burn,” “right on,” and “off the pigs.”
---from Fred Siegel's "The Romance of Evil" in City Journal
1) Chronicling the 10 year (1967-1977) exploits of the West German militant group Rote Armee Fraktion (Red Army Faction), The Baader Meinhof Complex reminded me a little of Scorsese's Goodfellas with its fidelity to a lengthy, over-crammed violent story based on real life (or in this case Stephen Aust's biography of the group). It also struck me as very much working in the same ambivalent vein as Arthur Penn's Bonnie and Clyde (1967). Both works invite the viewer to identify with young, good-looking, free-wheeling protagonists in revolt against the system, and then each film's mood darkens as their criminality catches up with them. The Baader-Meinhof group mostly consists of the sociopathic but charismatic Andreas Baader (Moritz Bleibtreu, who I last saw in Run, Lola Run), journalist Ulrike Meinhof (Martina Gedeck), who might've joined the group because her husband fooled around on her, and lastly Gudrun Ennslin (Johanna Wokalek). After initially blowing up part of a department store in protest of the German establishment's support of the Vietnam war, the RAF become increasingly radicalized as they rob banks, assassinate their enemies, and suffer the cat-and-mouse persecution of the head of the German police force, Horst Herold (played by a sympathetic Bruno Ganz). 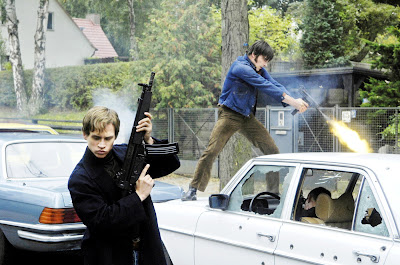 2) How does the movie resemble Bonnie and Clyde? At one point, Andreas gets fed up with training in an extremist Palestinian camp and yells out "We are urban guerrillas! We want to rob banks!" In another scene, while joy-riding around on the highway, Andreas hands a gun to a younger cohort and encourages him to shoot wildly out the window as they laugh. I kept being reminded of Pauline Kael's review of Godard's Breathless when she wrote: "The characters of Breathless are casual, carefree moral idiots. . . . And that's what's frightening about Breathless: not only are the characters familiar in an exciting revealing way, they are terribly attractive." Dressed in go-go boots and miniskirts, Gudrun and Ulrike revel in their audacity, their ability to act, even if their ideology leads them quickly to murder and imprisonment. At one point, Gudrun points out that in America all one can do is shop and eat, but her group can do more. There's a romantic ferocity in their belief in armed struggle. 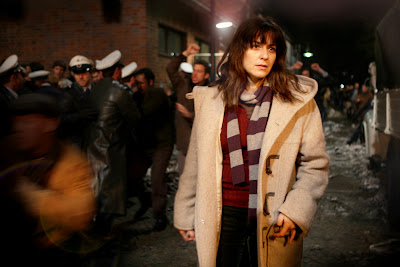 3) And, as in Bonnie and Clyde, the film does a good job of exploring the downside of violent revolt. Just as Clyde's brother Buck gets shot in the head and suffers for hours before dying, so do we see Communist student leader Rudi Dutschke shot twice in the face before he takes off his shoes, talks of needing a haircut, and walks around before passing out. After some subtly ironic moments of payback (in Italy, Andreas rages against his car getting stolen after he persuades another man to steal a woman's wallet), the leaders of the RAF end up in solitary confinement in jail rather quickly. Much of the latter half of the film consists of younger members of the RAF committing crimes as the frustrated and bewildered original trio listen about it on the radio in prison. Another member dies from a hunger strike. Intriguingly, as time goes on, the basic allure of the organization does not die down. There were always younger members willing to carry on the radical agenda.
4) The Baader Meinhof Complex retains its ambiguities not in terms of the sickly attractiveness of gangsters, but also in its love/hate relationship with American culture. Just as in Godard's Masculin, feminin, the characters drink Coca-Cola and dance to rock and roll as they denounce American imperialism. When one watches the preview for Complex, one finds that the RAF's brand of hyper-violence fits right in with today's jaded viewing audience, who won't understand the politics involved, but will like the gunfire, the sunglasses, the fist-pumps in the air, and all of the rest of the coded gestures of youthful revolt. In the trailer, the words "Villains, victims, icons?" flash on the screen. One thing's for sure: the RAF looks good in a movie.
Some links:
"Tragedy, Terrorism, and Glamor: A Review of The Baader-Meinhof Complex"
Christopher Hitchens' review in Vanity Fair
Fionnuala Halligan's article in Screen
Manohla Dargis' review in The New York Times
David Cox writing for The Guardian
Labels: The Baader Meinhof Complex

Edward Copeland said…
I recently watched this and liked the film quite a bit. I just find it fascinating as you watch people's motives (on either end of the political spectrum) that begin in nobility, turn to anger, then obsession and irrationality and finally such insane violence that no one even remembers what the origin of their movement.
January 23, 2010 at 6:52 PM

The Film Doctor said…
Thanks, Edward. I liked the earlier parts of the movie better. Once the reactionaries end up in jail, their political posturing just looks absurd. I wonder how much real Ulrike realized how much she had allowed herself to be seduced and suckered by the movement.
January 23, 2010 at 9:48 PM