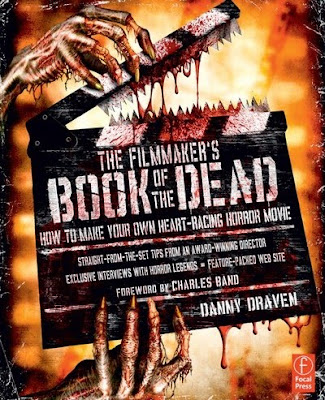 1) After determining that no one had vanished last night, I started off the morning showing the class the making-of documentary of Sofia Coppola's Lost in Translation, noting her problems with starring in Godfather 3 after Winona Ryder backed out at the last second. I then used the Elmo to project various pages from Barry Braverman's Video Shooter: Storytelling with DV, HD, and HDV Cameras on to the screen. He points out that you must exclude, exclude, exclude when composing a shot, cutting out all visual irrelevancies. He recommends using lots of close-ups, which leaves me wondering if perhaps we've become too influenced by television. I mentioned that in the course of film's history, editing has picked up speed as audiences have become more visually used to it. Also, directors in the 1930s and 40s would sometimes take a long time to get around to a close-up, and then only for emotional emphasis (as in Bringing Up Baby). We also talked about triangular composition for shots, the problem with the automatic exposure setting, the need to give the actor adequate headroom, and Braverman's recommendation that we strive to not rely on medium eye-level shots. Instead we should shoot from very low (getting our knees dirty), or very high to mix things up.
2) In my classroom, I go back and forth between an Elmo, a computer, and a DVD player all connected to an overhead projector. Once the class finished a draft of their movie treatment, the director e-mailed it to me, and we projected it on a large screen and the entire group workshopped the draft scene by scene (see the story idea in the last post) as the director revised it on the computer. I was struck by how much more complicated the treatment was than the original idea, with lots of extra scenes that we immediately starting cutting. Also, much of the dialogue was very pedestrian and relentlessly focused on the plot, so I recommended that we try to make the dialogue a little more natural by asking the students what would they use as an ice-breaker for conversation? Someone recommended that the character say "How about them blue smurf-dudes in Avatar?" I explained to the class how to shoot a chase scene, and how to create a dominant in a group scene by having one character move as the others don't. Eventually, we agreed upon a improved draft and took a break for lunch.
3) After lunch, the director wrote down on the white board various times from Monday through Friday of next week, and we all figured out a shooting schedule and locations--a soccer field, a school hallway, a classroom, a bedroom for the night scenes, someone's house for another hallway scene, and the exterior morning footage of the hero Kyle getting killed by a van. We left in an entire day (Wed.) for reshooting scenes that didn't work. We also learned that the Pinnacle 12 software on the class computers stopped burning DVDs correctly, so I walked over and asked the extremely busy IT people if they could look at them (they said they would, later). In the meantime, the students felt inclined to do all of their editing on iMovie using one of the student's Mac laptop, since that's the only one that fully works thus far.
4) Lastly, I explained the basic principles of three-point lighting, and we shot a practice scene in a lounge nearby. We quickly discovered that a) most of the brand new lights didn't work, and it took me awhile to find the directions on how to fix them in various packing materials under a desk, b) other students kept walking by, making noise and disrupting things, or a professor started talking on the phone in his office, c) the choreography of the scene was difficult to figure out, since Kyle was supposed to grab Alison's arm when she touched the photo when he was sort of asleep in a chair, and d) Alison kept forgetting her lines. In all, there seemed to be millions of ways of mucking up this scene. For instance, how does one position the camera when Alison stands up in exasperation. Do we use a matching action cut, or tilt the camera, or leave way too much headroom to give her space to stand in the shot? Truly, we have our work cut out for us next week.
Labels: video production notes

Ted Fisher said…
It's really fun to watch this over your shoulder. I'm looking forward to finding out how it goes.

The Film Doctor said…
Thanks, Ted. Much depends now on the willingness of the class to finalize their story boards, and learn from their mistakes while shooting. Their story idea is excellent.
January 9, 2010 at 9:43 AM

Richard Bellamy said…
You are a good teacher! And you seem to be patient! That's what it takes: a lot of patience.

I always wonder about that standing up shot. We usually do it as a separate shot or handheld.

Wow! I share your exasperation with invading sound! People can even see us shooting and pay no attention! We picked the most isolated classroom for this year's Western sound stage set: a woman's study - and it was very quiet there though the sound had a bit of an echo to it. Then we did some shots outside that portable classroom on a veranda - again, the farthest we could get from the rest of the campus - and after school! We set up the shot - leaf-blower! We wait. We set up the shot - airplane! We wait - and time starts running out! I look at the students sometimes and jokingly tear my hair and say, "How are we expected to create art?"
January 9, 2010 at 3:27 PM

The Film Doctor said…
Thanks, Hokahey. I've not been emphasizing (surprise) the weaknesses in my teaching--the times when I should know more about how to use the editing software, for instance. I will try to not interfere with the director's choices much this coming week, and yet his willingness to tackle the intricacies of every shot will determine much of the success of the video. Shooting can be fun, but a good director, I've noticed, tends to work everyone more than they may want to.
January 10, 2010 at 1:14 PM

Thanks for the updates.

Out of curiosity, when you have time, what's the "problem with the automatic exposure setting." I'm assuming students have run into problems with it in the past.
January 10, 2010 at 5:17 PM

The Film Doctor said…
Yes, Barry Braverman recommends that you disable the auto-exposure during shooting to prevent the iris breathing--adjusting and readjusting in midscene to accomodate camera movement. He also points out that auto-exposure leaves in 18 percent gray regardless. It's better to be in control of the exposure.
January 11, 2010 at 1:08 PM