Trouble in Paradise Falls: the Biblical zombie attack of Legion 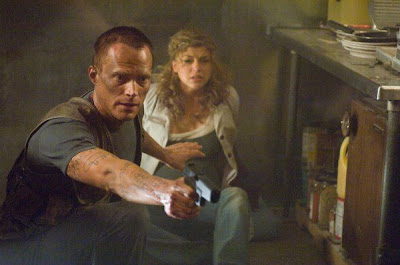 "And Jesus asked him, saying, `What is thy name?' And he said, `Legion': because many devils were entered into him."--Luke 8:30
If you approach Legion as a demented mashup between a self-conscious B-movie like Slither and John Milton's Paradise Lost, you could maybe enjoy this film until it gets really ludicrous in its last half-hour. For starters, I like Paul Bettany, especially in Wimbledon, and why not have him play a macho angel intent upon saving the very important unborn child of Charlie (Adrienne Palicki) who works as a waitress in a miserable isolated desert diner in Paradise Falls? Much like Schwarzenegger's entrance in the first Terminator, archangel Michael (Bettany) arrives zap in the night city, cuts off his wings with a knife, and then grabs a bunch of AK-47 rifles and machine guns because, as he says, "There's not much time." Then we see a policeman telling his partner about the "goddamn animals" of the night streets who should just "burn," and I was struck by how his little judgmental harangue sounded like something Travis Bickle would say in Taxi Driver.
Legion proposes a world of divine judgment where an Old Testament angry God plans on burning everyone because he's "tired of all the bullshit," but meanwhile, in Miltonic fashion, Michael has decided to defy God (as Satan does in Paradise Lost). Michael chooses to do what he can to keep Charlie's baby alive even though God has already whimsically sent a bunch of zombie-like humans possessed by angels to Paradise Falls (get it?) to kill that baby as fast as possible. Charlie, meanwhile, has a Joseph-like male friend named Jeep (Lucas Black) who wants to raise the child with her even though it is not his, and (small spoiler alert), the baby gets born on approximately Dec. 25. Another more obedient archangel Gabriel (Kevin Durand) calls Michael God's son, so this film appears to contain at least two Christ figures.
After dealing with the cops efficiently, Michael joins the unlucky group in the diner which includes a sulky rebellious teenage daughter and her snotty parents; Kyle Williams (who is lost); Dennis Quaid as the sullen divorcee owner of the diner; and his loyal fry cook (Charles S. Dutton). Everyone in the diner gets grumpy because they can't call anyone on the phone, the TV doesn't convey anything but a test pattern, and there seems to be a large Biblical swarm of CGI flies or angels or something in the distance. A sweet granny shows up and cheerfully tells Charlie that "her baby is gonna burn!" After the old woman bites a man on the neck, Dutton throws a pan at her head, but she proves impervious as she then climbs rapidly up on the ceiling until finally Kyle Williams' character shoots her dead. 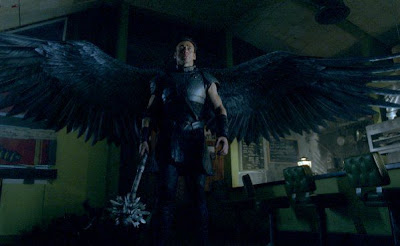 By this point, I still liked this movie. I liked the creepy Tastee Freez van that shows up later in the evening as Michael and the guys stand guard the diner's roof, awaiting the apocalypse with a bunch of guns. I like the metaphysical discussions they have. At one point, someone says he doesn't believe in God, and Michael retorts "He doesn't believe in you either." Indeed, the God of Legion seems curiously skeptical, at least when it comes to his inability to believe in humans (who can blame Him?). For awhile He shows a wicked sense of fun when he dangles one character with large boils on his skin upside down on a cross, or arranges for a small demonic (I mean angel-possessed) boy to infiltrate the diner saying "I just want to play with the baby!" When people debate theology with Michael, he looks at them in a bored angelic way and says "I simply don't care what you believe. Something much worse is on the way. God gave an order I didn't believe in. He lost faith and I didn't."
For a kick-ass military angels-with-razor-sharp-wings action flick, Legion does get surprisingly chatty in between attacks. The characters confide things to each other like "Mother thought I was crazy" and "being bad is not good anymore." The teenage girl acknowledges responsibility for her family moving. Charlie confesses to wanting to abort the baby. Dennis Quaid's character cheerfully starts smoking again. Dutton's fry cook character wonders "If today was the last day on earth, would you be proud?" It is as if screenwriter and director Scott Stewart wanted to cram as much characterization as he could between zombified angel attacks.
By the end of the movie, any hope of narrative coherence falls off a cliff, but we do get to see Michael and Gabriel's celestial locker room up in heaven, and there's a bunch more angelic fighting action. I don't see why the other critics are so harsh on the spiritual kick-ass illogic of Legion.
Labels: Legion

Richard Bellamy said…
Almost saw this last Friday - desperate. May still see it. But the preview with the demonic granny crawling on the ceiling just made it look too ridiculous. Saw the preview many times.

The zombie/vampire/legions of hell genre is getting prolific - but, you know, with a little intelligence a movie like this could be a fun entertainment.
January 26, 2010 at 8:15 AM

The Film Doctor said…
Thanks, Hokahey. I found much of the film to be trashy fun, with more potential than actual achievement. But still, can't one ironically enjoy a movie like this? I still find myself trying to work out the confused metaphysics of the movie. Why didn't God send regular angels? Why all of the humans possessed? Can one really defy a divine plan? Isn't Michael's defiance part of a larger pattern? The movie is just loopy enough to be thought-provoking.
January 26, 2010 at 8:21 AM

Richard Bellamy said…
Yes, one can enjoy a movie like this. Glad you mentioned that. Not all movies have to be great works of art - and nowadays beggars can't be choosers. I really appreciate a movie that shows some thoughtful construction and may be silly or illogical but is a fun entertainment. Sometimes that's what I'm looking for. Sometimes I'd rather see a movie like that than a movie like A Serious Man or A Single Man. This past year I felt nicely entertained by Knowing and A Perfect Getaway - and recently by Eli - and sometimes entertained is enough. Going to see 74 different films in theaters as I did in 2009, I don't expect them all to be works of art.
January 26, 2010 at 11:20 AM

The Film Doctor said…
Yes, I wonder if we should call attention to that ironic appreciation up front in the review. I sometimes prefer the loopiness of a film like Legion in comparison to the grim seriousness of The Road. Stolid serious "classic" works can miss some essential playfulness in the process.

I also liked Legion in the way that it suggests that God himself is confused about what He's doing, as if fate, judgment, and destiny was infected by script doctors under studio pressure to ramp up the ending of the movie.
January 27, 2010 at 11:30 AM

Richard Bellamy said…
Well said. "Playfulness" is important. And you're right about The Road it's grim without the more touching connection between the man and boy that I felt in the book.
January 27, 2010 at 8:17 PM