Digital filmmaking class weblog 2011--Day 3: the art of the edit 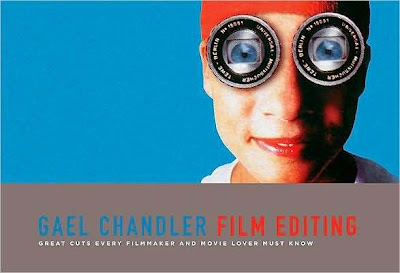 Today, in part, we learned about how to edit with iMovie and Premiere Pro.
After years of having our computers seize up and get bogged down with other editing software like Pinnacle, students learned how to edit quickly and successfully with iMovie even as they acknowledged some limitations of the program. Premiere Pro lets you tinker more with transitions, music, title cards, sound effects, and file options, etc. iMovie allows you work with the fundamentals, and that's mostly what the lesser-trained students needed. I found the software amazingly convenient for instructional purposes. Students edited three complete short films today. A couple of the guys were especially impressive as they showed off their knowledge of the intricacies of Premiere Pro on the big screen.
Meanwhile, Afterglow Productions somehow managed to get another sports class to perform as extras for their film Dodgeball: the Working Title. The storyline concerns two students, call them Bob and Alice, who are both chosen dead last to play on their respective teams. As the more macho teammates chest-bump each other in preparation, Bob looks on, alone, pensive. On the other team, standing on the other side of the gym, Alice mostly works on her nails. After the dodgeball game commences, balls are thrown in all directions, beaning some students on the head, knocking one guy out, until only Bob, one other fellow, and Alice are left. Bob squares off against the other fellow until he clobbers him. 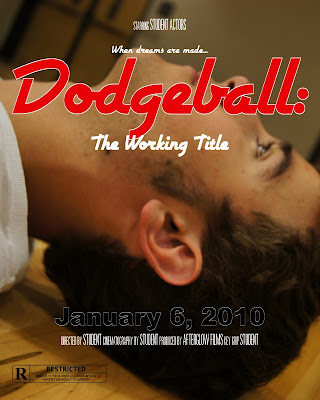 Then, just when Bob feels as if he might attain total victory, Alice nonchalantly walks up and drops a ball on his stomach, thereby winning for her team. Then, the camera tilts up to one lone fan in the bleachers who claps maniacally, an homage to the Citizen Kane scene when Kane keeps applauding all alone for his opera "star" Susan Alexander Kane (I should give extra credit for fancy film allusions).
Meanwhile, I learned more about our new Sony Alpha digital camera with "translucent mirror technology" and an interchangeable lens. The students fashioned a new boom for the microphone with two PVC pipes conjoined in such a way that it can hang over whatever is being recorded for sound. Another student mentioned that he plans on building a crude steadicam possibly this evening for a film shoot of "The Egg" by Andy Weir that will take place near some nice garden park on the edge of town tomorrow. The students of that group have borrowed a flat-bottomed boat for that shoot. They call it their avant-garde artistic project. I just hope that they don't freeze to death in the woods.
Meanwhile, all of the groups are now (in theory) preparing their pitches for the larger film projects. I will hear those first thing tomorrow morning. 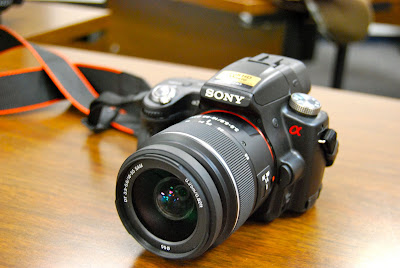 I found an unused classroom where another faculty member and I will pretend to be bored sinister film executives as in Robert Altman's The Player (I may show a scene from that film beforehand), impatiently sitting through their miserable attempts at getting their screenplay accepted.
We will see if they succeed.
some filmmaking-related links:
---David Bordwell considers how to edit one scene.
---Boardwalk Empire's special effects
---new year's resolutions for filmmakers
---the good, bad, and ugly of DIY independent filmmaking
---sword-tip video camera
---"a tougher climb to studio executive ranks"
Labels: digital filmmaking class weblog

Richard Bellamy said…
Sounds like great progress. I got three film editing books for Christmas (from Jason of the Cooler), and one of them is Film Editing pictured above. It's really clear and simple, and I like it a lot. I wish my Film Club members would take the time to really look at books like this. I was thinking of doing a PowerPoint for them using screen captures and the same sort of approach. Opening a book is so hard for some of them
January 6, 2011 at 2:32 PM

The Film Doctor said…
What were the other books? I turned to Katz's Film Directing: Shot by Shot for some tips about storyboarding first thing this morning. You are lucky to have someone as knowledgeable as Jason giving you film-related presents.
January 6, 2011 at 6:28 PM

Jason Bellamy said…
I gave the gifts, and I can't even remember what the other two were. Admittedly, I've never seen them myself. Ordered them off Amazon. But previewing them in Amazon -- with all those thumbnails, etc -- I thought of Hokahey's film club and figured that either he'd pick up on some good tips to impart to his students or that he could leave the book in his classroom and let them pick up tips for themselves. Man, when I was a kid if I could have had a video camera and a book about shooting a movie, I'd have been in heaven. Instead I started writing about movies instead of making them -- so it wasn't a total loss.

Anyway, one of the other books was from the same production series as the Film Editing book you pictured: Cinematic Storytelling, I think.

* "I should give extra credit for fancy film allusions..." Indeed, you should!

* I love the resourcefulness of your class to fashion boom mics and the like. I've long remembered a moment from an episode of Doogie Howser, MD, when Doogie's friend is shooting a movie and they create a tracking effect by putting the cameraman in a wheelbarrow and wheeling him around. Genius!
January 9, 2011 at 8:08 AM