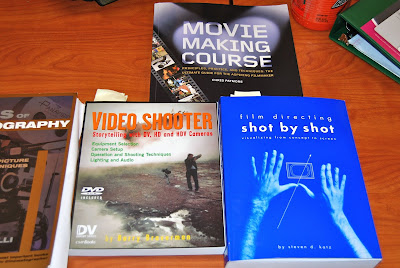 "It begins with alertness to visual possibilities. Artists and photographers generally agree that their visual memory improves when practicing their crafts. This ability to remember the past is an aid to envisioning in the present. After alertness comes exploration. The first line in the panel of a storyboard should be made with a sense of freedom. There is no such thing as a mistake in visualization, only alternative ideas. And exploration ultimately leads to discovery." ---Steve Katz
Today, it rained, limiting our ability to go to a nearby lake for the shoot of "The Egg" this morning, so I showed off some sample storyboards from Steve Katz's Film Directing Shot by Shot on the Elmo.
We then turned to the pitches. Each group sat across from the rest of the class and tried to convey its narratives quickly. Each group tended to have over-ambitious storylines that involve death and insanity (an accurate portrait of modern-day America). Los Jefes's pitch turned our school into an insane asylum with the use of Photoshop. It also ended with a scene where an imaginary friend kills a young man inside of an abandoned caboose. Our delusional heroine(?) emerges from the window of the train car with her hands covered with blood and walks off with her arm over the imaginary friend's shoulders. Bad Horse Productions shared their Black Swan-esque demented doll idea. I recommended that they ultimately hold some doll auditions and film them for the director's cut DVD. Afterglow Pictures insists upon fashioning a film involving a cocaine dealer, a stabbing, a gunfight, and, incongruously, a young femme fatale who manipulates the smitten hero into trying to obtaining alcohol for her, no doubt all before breakfast.
Then, we wrote and storyboarded. I was struck by the sense of languor amongst some of the students. One director thought it would be best to not include dialogue. 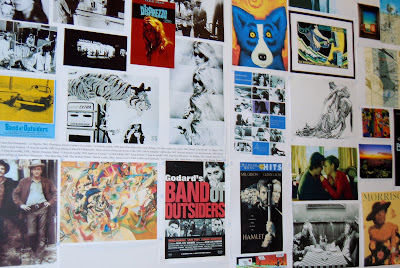 "Not include dialogue?" I asked.
"Yes."
"How will your characters communicate?"
"By using gestures."
(pause)
"I think that you should use dialogue."
In the scene, a real estate broker sells a house to a brother and a sister, so he says "Please pay the mortgage every second Thursday." Then he walks away, looking aghast and happy, no doubt due to having successfully avoided the spooky doll up the attic. 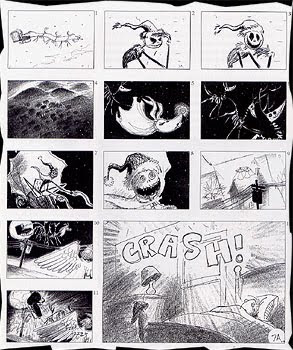 I asked, "Do the brother and sister say anything back to the broker?" The students in the group looked at me. "How about `Thanks!'"
Now the two characters stand in their new house, mute. What would they say? It occurred to me that writing semi-realistic efficient dialogue may be one of the toughest things to ask for in this class. Their resulting scenes so often end up being too brief, dry, and formulaic. How do people actually talk?
They eventually worked out this beginning interchange:
Sister: "Will you go get the boxes out of the truck?"
Brother: (sarcastic) "Will you go get the boxes out of the truck?"
She slaps him.
He gets the boxes.
By the afternoon, Afterglow Productions returned from their boating expedition. (the weather did clear up in the afternoon). They showed me a serene scene involving God (wearing tweed) gently guiding the disciple into the boat, whereupon she slowly drifts away toward the woods. It looked much more gentle than the stabbing of a cocaine addict. 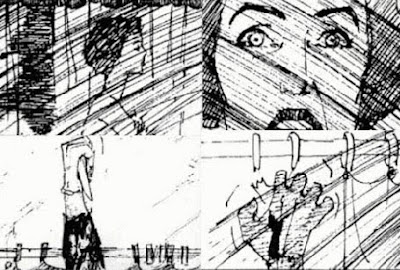 Tomorrow, we will watch the opening credits of Vertigo (because some of the students were filming something similar today) and the pool/hotel extended montage in The Graduate in the hopes of trying to solve the basic question: how do I get my character from the car to the bedroom of an insane asylum quickly?
Labels: digital filmmaking class weblog

Jason Bellamy said…
"...in the hopes of trying to solve the basic question: how do I get my character from the car to the bedroom of an insane asylum quickly?"

Sometimes when I'm watching a movie I'm struck at how easily we all follow cuts (visual, dramatic, tonal) that if you imagine them would seem to disrupt the flow. As writers, we try to segue one thought to another from paragraph to paragraph, and when we're about to switch topics entirely we throw in that extra return line or bolded word to cue the reader, so I think when most of us try to think in terms of cinema we want to do the same, but mostly it's unnecessary.

And yet, alas, most student projects do seem to have clumsy transitions, usually because they lack two things that most major films never go without: a variable score and consistent ambient noise levels. Sound is such a key part of making those seamless transitions, and it's something that a student film project will suffer to master -- due to time and available resources.

I've been learning anew both how hard it is to write good dialogue, and the difficulty of making effective and nonintrusive transitions from place to place in a movie. I agree with you about sound. We watched a movie made last year, and the differences in the room tones called attention to themselves much more stridently than before. You are right, also, about the lack of time for these students to master these elements. One of the groups does have a decent amount of experience with filmmaking. I'll be curious to see what they can pull off.
January 9, 2011 at 10:06 AM