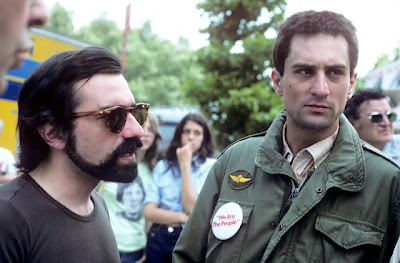 After a morning of showing off scenes of Godard and Rohmer at work, teaching three point lighting techniques, and taking inventory, I let the two remaining film crews shoot scenes all day. In a way, teaching this kind of class is effortless. The students will learn from the experience of shooting badly, and Lord knows they had trouble coming up with a simple conversation between two characters in the lunchroom.After 12 takes, Eva had ground up her bagel into small pieces, but she still labored at looking shy and withdrawn (because she isn't), just as John took many takes to speak his lines more slowly, with natural pauses, and keep himself within the camera's frame. Shooting a given shot teaches one to appreciate the artistry and professionalism of any established film crew. How do they figure out how to not cut off people at the waist when they stand up? How do they get rid of every ambient noise--a crash of dishes in the distance, a coach talking as he walks by? Shooting helps one appreciate both sun (and the extreme brevity of good outdoor lighting) and quiet. Who knew that a heating vent can ruin a scene? 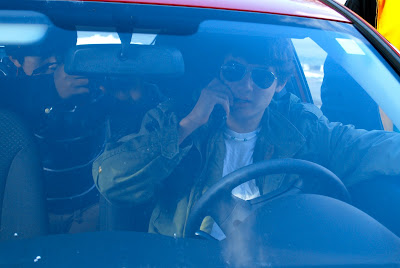 I spent much of the day hanging out with Afterglow films. The lead actor Alex reminded me a little of Travis Bickle with his green army jacket and '70s mirror shades. The residue of melting snow and ice added a grim citified grunge to the scene as Alex muttered hackneyed dialogue on his cell phone with his dealer: "I don't know. . . . gin, vodka, (sniff) Do you think you could get me some of the usual, man?" Where to place the microphone? Over his shoulder? We then travelled to the alley where Afterglow will shoot their stabbing scene tomorrow at dusk. The students were smart enough to ask permission at the local police station to use the alley at 4:30 tomorrow, and the policeman on duty was very nice about it. 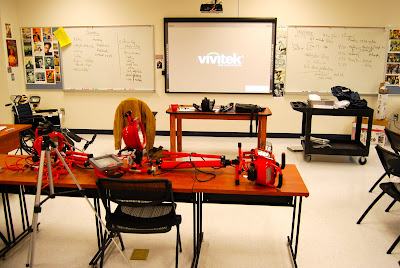 For a time we considered various movies for them to make during an independent study next semester: a Blair Witch-esque documentary of a local abandoned warehouse? or how a doc about a local murder at a feed store? How about remakes of films made in previous classes, but this time limited to point of view single shot versions? Isn't it about time somebody shot a musical? We all agreed that really only one kind of film absolutely needs to be made, of course: a dream heist zombie romantic comedy.
By later afternoon, I followed the school minibus to a student's house, where Afterglow used the last sunlit moments to shoot a crass encounter between Erica and Steve. Erica just wants to use Steve to get liquor from his coke-addicted brother, so after some sweet talk and a kiss of the cheek, she obtains what she's after. This film has two murders (a stabbing and a shooting), a cocaine deal gone bad, a manipulative femme fatale, and one sap who just wants to not eat alone in the cafeteria. 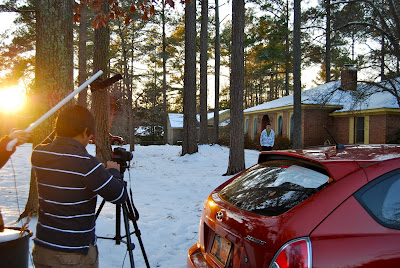 When Afterglow ran the storyline past one of my colleagues, he asked "Why are you making this?" It was a good question. Because the movie portrays illicit behavior for a jaded, terminally distracted audience in need of cheap sensation? Perhaps. But it still seems right to be on the side of the few who make the spectacle instead of the many who merely succumb to it.
Labels: digital filmmaking class weblog

Richard Bellamy said…
FilmDr. - As always, your course sounds like a lot of fun, and you are very lucky to be able to take the students to other locations. That's a limitation at our school unless I pay for a bus; I can't drive them, and they can't drive other students unless they are seniors.

Also, once teenagers get motivated and into a productive routine, their lack of inhibitions and their sense of humor can lead to a lot of fun situations: like the zombie eating the tree. Their improves can MAKE a film.

As I told you last year, we did a zombie movie and a sequel: Night of the Living Dead Nazis 1 & 2. The first was more or less scripted, but the second was free-flow and ended up as a parody of Twilight with vampires rescuing the teens, lost in the woods as in Blair Witch. Also, bad weather can be an asset, as I think it was for you. Nazis 2 was filmed in the snowy woods, with falling snow for one sequence.

Do you then have a viewing festival at the end of the course, and I'm assuming the posters are made by the students (previous post)?

Keep up the great teaching!

(Regarding your drive through the snow, we had a snow on Cape Cod yesterday but we just got a couple of inches while Boston got buried.)
January 13, 2011 at 2:13 PM

Yes, the students Googled "way to make a movie poster" last year and found a website that helps one do just that.

I think location shooting is crucial to success of the class. Yesterday, the alley they had in mind proved too frozen over and noisy for use, so I found another abandoned lot a block away. So we shot there, but it was amazing how quickly a shadow ran up the brick wall as the sun set, obliging the crew to rush the shooting a bit.

Increasingly, the improving technology helps with their films, but writing, lighting, acting, and sound all still prove difficult to keep at a high level. If we had time, I would have the class write and revise for at least two weeks before shooting anything. As they get better as a film crew, they may shoot 25 takes of a given bit of dialogue, but all of the dialogue still needs revision, and it's hard to get students to relax into a role.

Fortunately, by working hard, both groups are on schedule to finish their longer films by early next week.
January 14, 2011 at 6:49 AM

Richard Bellamy said…
Ah, time and the rushed shots. The problems we run into with Drama Club movies is always due to time.

Our strength tends to be the acting - but again time is a factor because they don't spend time memorizing lines and that leads to more takes than we'd like to do.

I totally WISH I could get students to write screenplays. I had some students do so in the past. But their lives seem too busy!

Our next project is a sci-fi movie called "Dimensions" and I'm trying to pull together student ideas for the plot. They have good ideas - and they loved Inception and Tron: Legacy.

As a gimmick, title cards will explain that the film was first released in 1952, it was later cut due to shocking content, but a damaged complete print was recently found and restored, and damaged dialogue is replaced by subtitles. That gives us a way to avoid the many times we do multiple takes and all of them are ruined by wind or the inevitable power tool or lawn mower from our nemesis the custodial staff.

It will also allow us to use models in lieu of CGI. One scene involves a building blowing up. I made a wooden model of a tower, blew it up with a model rocket engine, set it on fire, and got some awesome shots that can be done slow-mo. (Of course, the pyrotechnics have to be done at home.)
January 14, 2011 at 3:35 PM

The Film Doctor said…
Yes, time is crucial. The interim class has two weeks to focus on filmmaking alone, so it tends to do better than the classes during the regular semester.

Yesterday, one of the students showed me some how-to special effects videos on YouTube that specialized in blood splatters and killing zombies. I may write a post about that. There's a gleeful nihilism of those who have seen too many cynical action films.

The two groups have largely "wrapped" their principal photography. I'll try to write about it in more detail later this weekend.
January 15, 2011 at 10:20 AM