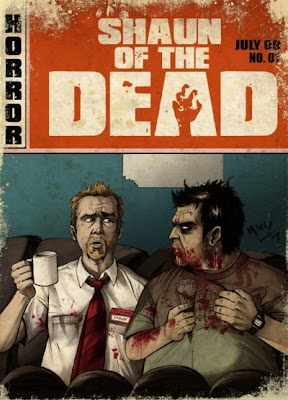 Last Friday, after writing for much of the morning, the filmmaking class began shooting two action films simultaneously on different sides of campus as the weather clouded over. I was obliged to help with both. For the first group, I mimicked driving over a student in my Hyundai Accent (some dubious advice from the director: "Just drive up normally and he will dodge out of the way").
I then rushed over to another group whose members were beginning to shoot a meta zombie attack sequence. They didn't have much of a script, so I trained the camera on one fellow named Max who discussed the film crew in mockumentary-style as they waited for the zombies to arrive for a scene. The idea was to make both the director and the cameraman annoying enough to warrant their upcoming death, so these two were complaining as the three zombies approached, no one supposedly knowing that they were real zombies. They thought they were just shooting a scene with actors.
Incidentally, I learned something about how to make fake blood from corn syrup, corn starch, and food dye. The director mixed it all in a big skillet, then applied the blood with grey and green and brown ground-up chalk to create the proper zombie patina. The zombie extras took awhile to learn the proper shuffling walk and growling sounds.
By smearing a measure of blood on their clothes, all three zombies looked convincing, so I got to yell "Zombies Attack!" to cue their slow distant approach from behind a wall. The various film crew members muttered stuff about how they "looked convincing," until the camera man walked up to one and was promptly attacked and killed. The zombies then attacked the director, knocking her down on the lawn. By this point, the remaining now-frightened crew rushed through a conveniently open window into the film class, and the zombies chased them inside. The crew had by then boiled down to two people, Max and Sarah. They ran down a hallway and then worked their way outside again. When they realized how easily they could outrun the zombies, Max asked Sarah if she would like to get some coffee. She said sure, and they walked off. The zombies in the distance, meanwhile, stumbled off in the wrong direction, one of them pausing to eat a tree. 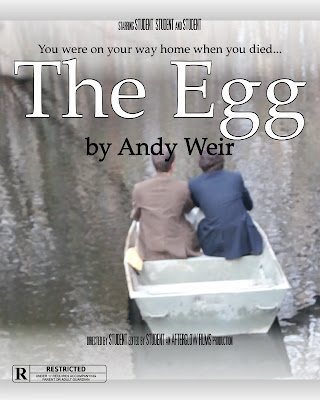 Then, early Monday morning, a big snow storm hit the area. I managed to drive over to work early enough to avoid the first onslaught of the snow, but unfortunately, no other teachers arrived, so I was placed in the awkward position of the one authority figure asking students to work while everyone else played in the snow (some even made a special point of throwing snowballs outside our classroom). I looked through several screenplays and storyboards, but I could sense an ugly situation evolving if I kept them much longer, so I cancelled class. I ended up driving in the snow storm about 25 miles back home with the windshield wipers freezing up, very poor visibility, and cars stranded on the side of the road (South Carolinians are not all that used to this kind of weather). After finally getting home (the trip took me three times longer than usual), I sent an e-mail to the students announcing the cancellation for the next day's class, as well.
Today, however, the snow stopped, and except for some icy patches, the roads had cleared by mid-afternoon, so I visited the school to find Afterglow Films shooting a scene in the lunchroom with extras. Los Jefes, Inc. had already shot a montage showing the evolving friendship between a woman and her imaginary friend, Amy (who wears different colored sweaters that darken as she becomes evil). The students were frustrated by their inability to shoot movies on location downtown, due to the problems with ice, snow, and continuity, but I suggested that if the weather continued to interfere, they could still shoot scenes on campus, in part to practice the acting. The class has now finished a video version of "The Egg," a Dodgeball video, the zombie film called "Zombehs," and others. 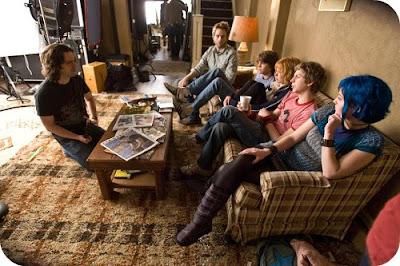 I also visited an igloo that the students had built on campus. Tomorrow, we will resume class, and see what we can do with only three shooting days of class remaining.
filmmaking-related links:
---Godard directing Band a part
---Eric Rohmer at work on A Summer's Tale
---making Scott Pilgrim
---Jeff Bridges visits the Little Lebowski store
---Ben Stiller asks "Why is Tom Cruise?"
---Scott Pilgrim's title sequence
Labels: digital filmmaking class weblog