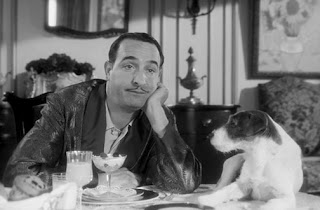 The Artist left me wondering exactly how it has earned its considerable praise. Is it because the dog is so cute? The similar talking dog Arthur (with subtitles) in Beginners ruined that film for me.  I don't think that I will be able to appreciate any cinematic canines for a long while. The director of that film, Mike Mills, seemed so neurotically concerned with offsetting the sad (and possibly box office poisonous) effects of the cancer and eventual death of Christopher Plummer's character, everyone in the movie has to maintain a sickly compensatory sweetness. I've seen so many cats in films like The Future and Tiny Furniture, they leave me wondering: are cute pets signs of studio anxiety? These telegenic animals come across as Pavlovian in their intended effect, as if to say "Trigger the need-to-nurture emotion now."

So, yes, The Artist is full of charm, excellent performances, and the cinematography by Guillaume Schiffman evokes the era well, but George (Jean Dujardin) and Peppy (?) (Berenice Bejo) compete with the dog in their drive to be appealing.  I guess all of this winsomeness may be designed to offset the negativity of Valentin's self-destructive pride, but I had trouble believing in his arrogance.  Why couldn't he try the new sound technology out, as the silent stars actually did back in the 1920s, and as the characters do in the much more plausible Singing in the Rain (1952)?  Once Greta Garbo successfully made the awkward transition to sound with Anna Christie (1930), her boyfriend, the MGM silent star John Gilbert, tried and failed because his voice was too high (also his silent-movie era enhanced acting style didn't help matters). Later, Garbo attempted to save Gilbert's career much as Peppy does for George by insisting that he costar in Queen Christina (1933). (In case anyone was left wondering about this correspondence, Peppy at one point uncharacteristically says "I want to be alone.") Still, usually, when seeing depictions of people making the transition to the sound era, one finds them pragmatically acknowledging technological change. 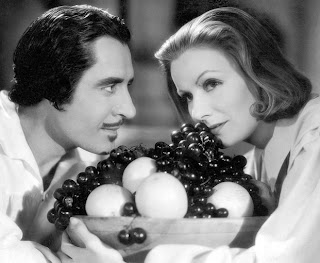 In The Artist, George never even considers it. Instead of fully explaining why he would do such a perverse thing as throw his highly remunerative career away, the filmmakers keep finding other visual ways to make his decision appear a fait accompli. At the beginning of The Artist (in a film within the film), he says "I won't talk!" on an intertitle while being tortured, so we are primed to know what to expect. George is not only proud, he's increasingly bewilderingly stupid. Instead of giving us an adequate reason why he so stubbornly refuses to make the switch, the filmmakers show us a scene where George is clearly going down the stairs as Peppy rises up, or we see George sink into the quicksand in his self-financed flop, Tears of Love. Why is the film called The Artist?  At one point, George says, "I'm not a puppet.  I'm an artist!" But he's clearly a silent film star, so I guess the title was meant to be ironic.

Writer and director Hazanavicius seems content to conjure up some under-explained moody friction before turning to wish-fulfillment and George's (spoiler alert) glorious return to the limelight. Aside from the canisters of old silent films that George burns in a fit of despondency,  George ultimately loses nothing.  Peppy has all of his former auctioned off possessions waiting for him in a beautiful new Gatsbyish mansion.  His possessions, fame, everything just waits for its retrieval at the end. He even gets his "That'll do, pig" chauffeur (James Cromwell) back.

The Artist is so eager to please, it licks the viewer's face wildly, just like a dog would do, but there's something too self-congratulatory about its crowds wildly applauding, its premiere fans jockeying into position, its naked appeals to our emotions, its clumsy sampling of the music from Vertigo, and the way it keeps telegraphing its techniques. Hazanavicius makes a fun reference to the famous marital montage of Citizen Kane when George's relationship with his wife dissolves, but we get to know Charles Foster Kane and his first wife well enough to understand why she gets sick of him. In contrast, the marriage in The Artist is never sufficiently explained. There's also a hint of the Citizen Kane projection scene when George first sees Doris (Penelope Miller) talk into a microphone, but again the homage just hangs there as one wonders why George is so quick to say "If that's the future, you can have it." 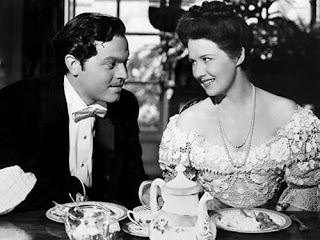 To recreate the silent film era, Hazanavicius fills the movie with types--the sweet ingenue, the cigar-chomping head of the studio, the fat policeman. Even Malcolm McDowell looks oddly like the wizard of Oz (Frank Morgan) in his brief cameo. Towards the end, the cheesy ministrations of a devoted canine leads the policeman to say of George "He owes his life to that dog!" with gee whiz enthusiasm. I still can't fathom why so many give in to this giddy, slack-jawed wonder.
Labels: The Artist

Corey Atad said…
I think I enjoyed the film more than you did, but yeah, the reaction to the film is utterly bewildering. I really don't get it. If people love the idea of silent films so much, why not go rent Sunrise or 7th Heaven instead?
January 23, 2012 at 10:56 PM

Jon said…
I like your analysis of this and although I haven't seen it (it hasn't come to Kalamazoo yet), I know that when I do, I'm going to be incredibly skeptical. With all of its cheekily borrowed references, I feel like it brings in a lot of baggage.
January 24, 2012 at 11:14 AM

An American writer/director would have focussed on George's struggle to survive the changeover and reestablish himself as a star in the talkies. And eventually emerge as a winner. Or fail (if it's a tragedy).

Hazanavicius' George is an artist with a capital A because he is devoted to silent cinema as an art form. He realizes (rightly) that the talkie is a beast of a different nature and rejects it. On artistic grounds.

Hazanavicius' take, or premise, is perhaps not very realistic but not all films are about realism, (historical or pschycological). This film expresses Hazanavicius' sentiment first and foremost.

I should mention that I haven't seen The Artist, this is merely my reading of the film as you present it in your review!

The Film Doctor said…
Thanks, Corey and Jon,

I imagine people like The Artist due to its novelty, its playfulness, and its sense of innocence. I may have disliked it mostly because the homages reminded me of better movies that treated the same themes in more subtle ways.

Your point about the French sensibility might be valid, although George never once shows much of an artistic sensibility. He seems too comfortable with his grandiloquent self to show much concern for form, and the one movie we see him make is highly conventional as the title Tears of Love indicates.
January 24, 2012 at 7:01 PM

xoxoxo said…
Valentin has a very thick French accent, which we finally get to hear at the end of the film. He is hesitant to try talkies because he doesn't want to fail, be embarrassed, or ridiculed. He is a very fearful person. Using the Vertigo theme, whether you like the choice or not, underlines his fear and paranoia.

The movie is a pastiche of lots of old movies, like Singin' in the Rain, A Star is Born, etc, but it's so lighthearted and obvious about its sources, its collage, that it's hard for me to get mad at it. It's just fun. It would be great if it got more folks watching some great old silent movies. We'll see.
January 29, 2012 at 6:26 PM

The Film Doctor said…
Thanks, Elizabeth,

You are right, but for some reason, instead of enjoying the film, I found The Artist's symbolic use of mise en scene in scenes like the staircase and the quicksand thunderingly obvious and manipulative.
February 1, 2012 at 4:50 AM

Anonymous said…
I see this film primarily as a vehicle for anti-chauvinistic (maybe even anti-masculine) subtextual themes.

On the surface the film appears to be a simple story of a movie star who can't "get with the times" and accept the technological changes in his profession. Beneath the surface, though, is a vibrant picture of the cinematic macho hero, a male that systematically patronizes the women around him. His wife and co-stars are visually represented through the female bust he owns and that appears throughout the film - they are props in his world.

He is a caricature of the male personality, most prominently so because he refuses to "talk," to the point where it results in his total undoing... the loss of wife and career -everything except man's best friend.

On the other hand, the female lead Peppy, who represents the historically overlooked female in society (and film), embraces speech and thereby usurps the man's position. Remarkable use of shadows, mirrors, and reflections to visually illustrate her "becoming" his professional equal and then surpassing him. A highlight of this is where she uses George's empty coat to embrace -herself- through his clothing.

It's ALL over this movie. He's going down the stairs, she's going up. The film is not strictly anti-male, but I would say that its tone is feminist in as much as it condemns the traditional male ego. This conception would run alongside many recent articles in the MSM that suggest that societal conceptions of manhood are now just as obsolete and up for challenge as female roles were in the 60's. Simply by entering his world, the female challenges man's role, and ironically he must become more like her in order to compete. He must learn to talk!

Peppy, and the audience, feels sorry for George because he's too proud and stupid to embrace the future. The film starts with a cheesy production of him saving her. It ends with her saving him. And , what must he do to earn his new wings? He must dance alongside Peppy as her equal. No hero here, no machoism. Only gratitude... that she has found a way to include him in a world she now dominates.

The Film Doctor said…
Thanks, Ryan, for your elaborate theory.

I usually like anti-chauvinistic movies, but I tended to view The Artist in terms of everyone's mostly reasonable reactions to the advent of sound in Singing in the Rain. In contrast, George is not only stubborn, but actively and unforgivingly stupid to the point where I don't see any reason for Peppy to save his stuff and bail him out. Why would she continue to like him?

Your point about how George's laconic quality reflects masculine gender roles does sound valid. I guess I just can't abide a movie that suffers such a privileged idiot, no matter how charming he may be otherwise. Psychologically, the movie just doesn't seem entirely plausible.
March 21, 2012 at 7:58 PM