Vampire angst, unsatisfied bloodlust, and a Volvo S60R: notes on the Gothic pleasures of Twilight 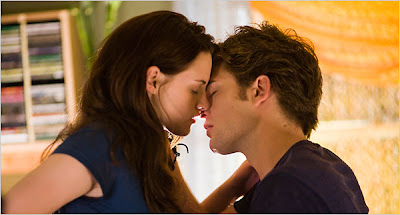 1) Having lost much of its bite transitioning to the big screen, Twilight will please its devoted fans, but do little for the uninitiated.

So sayeth the prevailing deity of the film critic summary, Rotten Tomatoes. Given its crummy 43% rating, Twilight can now suffer the indignity of a million smirking snarky snide reviews, but as one of the "uninitiated," I happened to enjoy the film, finding vampish humor in its Gothic excess.

2) When Bella Swan (Kristen Stewart) finds herself adjusting Mean Girls-style to the rainy blue-filtered atmosphere of Forks, , she becomes transfixed by the pale moody Edward Cullen (Robert Pattinson). Edward has impressive cheekbones, a killer bouffant, and James Dean moments of angst that scrunches up his features in world-weary pain. When he is initially forced to sit with Bella in biology class lab, Edward writhes due to, what? snotty contempt (?), unsatisfied bloodlust (?) until he begs to be moved to another class. Then he disappears for several days, further piquing Bella's interest. Finally, they speak. He asks her what she thinks about the weather. She asks, “Are you asking what I think about the weather?” Then he saves her from getting run over by a van. When she asks how he did that, he’s evasive as the biology class looks over mulching techniques. After much romantic to and fro, Bella Googles a local Native American tribe that happens to have wolf ancestors, and through an elaborate investigation determines what the audience has known all along--that Edward and his family are actually a bunch of vampires! And, even though some “animal” keeps eating various local security guards and fishermen, Bella can’t stop herself from loving the mysterious Edward, who drives a small but sporty Volvo S60R when he isn’t climbing trees or spying on her in her sleep.

3) Adapted from the popular novel by Stephanie Meyer and directed by Catherine Hardwicke, Twilight does some things competently. The producers were smart to choose two unknowns for the leads. Given her rapid march toward “irrevocable” vampire infatuation, Kristen Stewart underplays her role well. Perhaps due to his many years as a glorified extra in Harry Potter films, Pattinson vamps it up as a tormented aristocratic hunk. In these over-populated trouble economic times, what better thing to be than a cultured vampire who would like to eat humans, but virtuously restrains himself by devouring deer instead, a diet that Edward likens to vegetarianism? In fact, Edward would like to drink Bella’s blood, but, dreary little mortal that she is, Bella transfixes him because he can’t read her mind. They can’t consummate their love for some complicated vampiric reason, and besides his flesh is cold, but what better way to keep the romance alive than enforced chastity?

4) Twilight flounders some when it uses special effects. Given the television show Heroes, the X-Men series, and an upcoming films like Push, teenage film audiences are rapidly getting used to characters who can fly, see the future, control things with their minds, infiltrate the minds of fellow characters, etc., etc. Accordingly, the vampires of Twilight possess a bewildering range of abilities. Edward, can, for instance, move very quickly, but if that means that he zips around his Volvo extra fast to open the door for Bella, the scene just looks laughably fast-forwarded. While I could enjoy Bella’s and Ed’s romantic scenes where they fly around tall Gothic forests, he sometimes looks just as if a pulley were yanking him up. I also liked the power-packed Cullen family baseball game even as it resembled an Americanized Harry Potter Quiditch match.

5) Twilight suggests that humans are disposable, dull, and temporary compared to the rock star glamour of Wayfarer shade-wearing vampires. The ultimate hunters, vampires view humans as little more than meat, and one can see the disdain on the faces of the Cullen family when they find Edward has lost his heart to a mere lowlife mortal. It’s this perhaps fascistic disdain for people, and by extension the audience, that makes the film so appealing. Humans are so passé. As Edward says, “And so the lion fell in love with the lamb.” When the smitten Bella replies “What a stupid lamb,” he responds in resignation: “What a sick, masochistic lion.”

bd said…
Vampires seem to be the rockstars of modern "literature" thanks to Anne Rice's sexy portayal of them in the Interview with a Vampire series.

I admit to a fantasy desire to live life as Lestat or Magnus from time to time.

I wonder if there is another theme at work here... a multicultural theme? It seems that with shows like Twilight, Buffy, and the teenage witch genre, demons, vampires, werewolves, and their like are often treated as exotic friends and enemies, but not actually monsters. I've wondered if this isn't a statement about human diversity. After all, if Buffy can have a civil conversation with a demon from the lower levels of Hell, how hard could it be for us to get along with fellow humans with different ethnic origins?
November 22, 2008 at 10:07 AM

Ed Howard said…
I haven't seen this, and probably won't, but a lot of things in your review remind me of the Showtime series True Blood, which is quite a lot of vampiric fun. It's also adapted from a series of books, features the vampire/human romance trope (and the accompanying disdain from both other vamps and other humans), and the sped-up movement of the vampires. It's trashy, crazy, often stupid, and on occasion brilliant. A recent episode featured the lead vamp "turning" a nice Christian girl, who initially reacts with fear but then unexpectedly becomes excited when she realizes that she's free from Christian morality and can do whatever she wants now. It's hilarious.
November 22, 2008 at 12:48 PM

The Film Doctor said…
JUS--interesting thought, but I tend to associate vampires more with aristocracy. As Catherine Deneuve played classical piano in The Hunger, so does Ed in Twilight. Vampires have years of culture, smarts, and highly sophisticated Ipod collections. Werewolves strike me as gruff plebs in comparison.

Ed--thanks for your comment. I haven't seen True Blood. Given Ed's desire to not eat human blood, Twilight suggests a more politically correct vampire ethic--vampires with scruples, which I guess in part makes up for Bella's heathen desire to throw away her soul and live with the telegenic undead.
November 23, 2008 at 11:49 AM

Ed Howard said…
Actually, True Blood has the same idea -- many of the vampires are attempting to "mainstream" by drinking a synthetic compound called Tru Blood instead of real blood, and there's some tension between those vampires who want to mainstream and those who want to retain the old ways. Sounds like these two series have quite a lot in common.
November 24, 2008 at 12:35 AM

The Film Doctor said…
I imagine that the True Blood writers have been lifting ideas from Stephanie Meyer?

The more I think of it, I can't imagine what Edward Cullen sees in Bella aside from her propensity to become the damsel-in-distress threatened by skidding vans, rogue vampires, or drunken gangs. Yes, he can't read her mind, but what else is there to her aside from a highly limited life expectancy?
November 25, 2008 at 4:44 PM