The Film Doctor's Ten Most Disliked Films of 2008 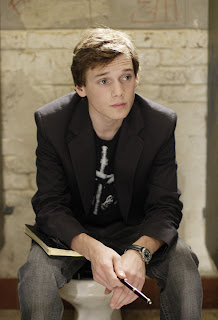 This was one of those films where I sat in the theater wondering whether there may be something more interesting elsewhere in the Cineplex. Jessica Alba got an eye transplant where she can suddenly see spooky things. I couldn’t even review it.

Many raved about this film, and I confess I enjoyed watching Robert Downey Jr. unsuccessfully try out the jet propulsion boots. Otherwise, the film struck me as endless metal crashing, pinging, and banging on metal. The most poignant moment—Jeff Bridges’ bald head looking scrawny and swamped by his big knock 'em sock 'em robot outfit.

This film confirmed my suspicions about the decline of modern man. Women will survive and prosper. Men won’t. It may not be such a bad thing.

See Number 8 and 7. Further proof. There is no hope.

A vile rip off of Wes Anderson’s Rushmore, even down to the minor characters and the shot composition style.

With long dyed hair, Nicholas Cage tries to look soulful in a clumsy Thai hit man flick that you can’t even enjoy on a campy level. What is going on in Cage’s mind? Why is he in these films? Why are there so many of them?

2) You Don’t Mess with the Zohan

If you are not convinced by the argument concerning 8, 7, and 6, Adam Sandler should remove any remaining doubts.

A deeply disturbing film in which middle-aged people writhe endlessly and grotesquely to dated pop. Views like a bad acid trip.

bd said…
About Mamma Mia!... I really think that your bad acid trips must have been worse than mine; I loved that film. 100% of the men in the audience when I saw it did too.

Of course, I was the only male.

Ed Howard said…
I haven't seen any of the rest, but I'm not sure a solid, enjoyable, inoffensive action flick like Iron Man belongs in the company of the bottom-feeders you cite here. That's a low blow.
December 9, 2008 at 8:43 AM

Dead Pan said…
I am lucky to have only seen Iron Man and Charlie Bartlett. While I do think Bartlett took a lot from Rushmore, I didn't exactly feel it stealing as much as you feel it did, but it was a pretty cliche film overall.

In regards to Iron Man, while I did enjoy it, I am in the same boat. My enjoyment actually came from the little moments with Downey Jr and Paltrow. Their wordplay reminded me of something like Bogart and Bacall. No, not on the same level, but it was a nice addition to an action film that elevated it a bit for me. I could also watch Robert Downey Jr talk for hours and probably be entertained. Other than that the story is really weak, the action is very boring, and the villain isn't very harrowing. Favreau's direction is so by the numbers I could predict each shot before I saw it.
December 9, 2008 at 11:13 AM

Wendymoon said…
I thought I was the only one who didn't enjoy Iron Man. Even though I like Robert Downey Jr., Jeff Bridges & Gwenyth Paltrow, I really didn't like the movie. For me, the problem was mixing the fantasy comic book hero with the very real world problems of war and terrorism. It just didn't work for me.
December 9, 2008 at 11:15 AM

The Film Doctor said…
JUS--I understand that many liked Mamma Mia!, but I was disturbed, alarmed, and confused while watching that film, in part because I usually like Meryl Streep's work. It all seemed like some sort of ghastly baby boomer revenge on the younger generation.

Ed, Shawn, and Wendymoon--Thanks for your comments. I understand too that many liked Iron Man. I tried to like it, but when it came time to draw up a list of the films I saw this year, Iron Man was near the bottom, and I too normally enjoy Downey Jr's work. I know nothing about the original Iron Man comic, so I missed many of the subtleties and allusions built in the storyline. I also thought the treatment of the Afghanistan villagers was patronizing and typical of our know-nothing-of-the-strange-culture foreign policy of the time.

I guess people liked Robert Downey Jr.'s little creative touches that he brought to the role. They give the film a more adult air, but otherwise the film could have been Transformers as far as I was concerned, only Transformers had better graphics.
December 9, 2008 at 1:47 PM

T.S. said…
Kudos for you for proclaiming Iron Man among your most disliked films. (Kudos, I guess, to saying so publicly; no kudos necessary on having an opinion.) I wasn't a big fan of the film either and have been genuinely surprised by those who fawned over it, especially those who said it somehow transcended the comic book film genre.

Otherwise, I can say that mercifully I haven't seen any of the other films on your list and don't plan to. Thanks for the rundown.
December 10, 2008 at 10:05 AM

Fox said…
I totally agree with you on the Mamma Mia! pick. Well, it may not be at the top of my worst list, but it's a contender. Some of the most clueless visual work of the year.

Anonymous said…
I also admit I liked MAMMA MIA! and can proudly call it a guilty pleasure. I thought Streep was quite good in demonstrating her versatility especially in that centerpiece "The Winner Takes It All" number. Despite Pierce Brosman, it's mostly an exhilarating film (as was the Broadway show that I saw of it) and there is room for ABBA in the 'popular pantheon."
I'm gla IRON MAN made your list, but most of the other garbage I didn't see, but salute you for your completism in that sense. I saw VALKYRE yesterday; perhaps that one could be added.
December 27, 2008 at 11:11 AM

The Film Doctor said…
Thanks for your comments, Sam. The key detail that really astonished me in Mamma Mia! was Streep's character stealing the wedding from her own daughter. Streep as the boomer "blushing bride" was particularly hard to stomach for me on a symbolic level. The younger characters just seemed like afterthoughts in the midst of a menopausal fantasy of renewal.
December 27, 2008 at 1:34 PM

Shazzy said…
A superhero who has a weapons manufacturing company? More disturbing than Streep's antics in 'Mamma Mia' (I actually ended up enjoying the film). Both, that one and 'Step Brothers' were guilty pleasures for me.
January 26, 2012 at 11:28 AM