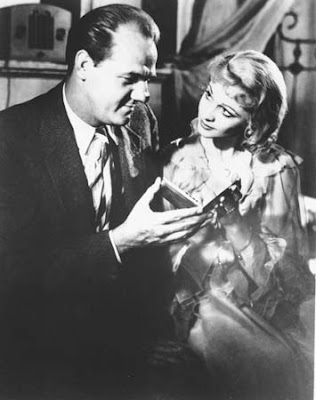 Twice now, I've directed a production of Tennessee Williams' A Streetcar Named Desire, and both times we began with the evening poker scene where Mitch awkwardly flirts with Blanche behind the curtain before Stanley throws his fit and eventually yells "Stella!" to persuade his wife to come downstairs. For this reason, I've seen Karl Malden perform as Mitch innumerable times on video and DVD. Now that Malden has passed away, I wonder, would Brando have looked so dynamic and masculine if he didn't have goony Mitch around for contrast? And would On the Waterfront have worked as well without Malden around as Father confessor?
Fortunately, he was there both times. RIP, Karl Malden.
Labels: Karl Malden

Joel Bocko said…
Yikes - the first I've heard of this. The death toll keeps climbing higher and higher. R.I.P., indeed. Though an excellent actor in his own right, he also made damn good foil - not just in Streetcar and Watefront but also as the sensible Bradley opposite George C. Scott in Patton.
July 1, 2009 at 11:50 PM

The Film Doctor said…
I agree. I also neglected to mention Baby Doll where Malden made another Mitch-like character uniquely grotesque.
July 2, 2009 at 12:56 PM