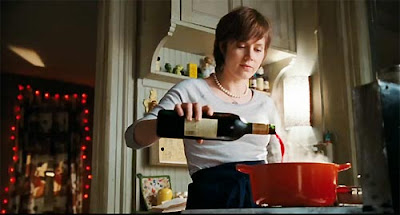 ---As McLuhan said, "The medium is the message." I've been surprised by the new permutations of the media these days, from Mediaite, the new website devoted to all things media, to the difficulties of programming TV with all of the changes taking place, to churchgoers tweeting, not to mention movies and books about blogging, websites replacing magazines, and people trusting a Google search over the evening news. One positive development--Anne Trubek believes that "We are all writers now":
"The conversational arts may be suffering (despite their enduring rules), but like it or not, we are all writers now. Perhaps this explains the loud clamouring over the questionable authority of online authorship. With traditional media feeling the pain, many professional writers worry that they have become dispensable. So they unfairly degrade the prose of amateurs in order to guard the ramparts.

True, much of what is written online is quotidian, informational, ephemeral. But writing has always been so: traditional newspapers line bird-cages a day later; lab reports describe methodology in tedious detail; the founding fathers wrote what they ate for lunch. And the quality of many blogs is high, indistinguishable in eloquence and intellect from many traditionally published works.

Our new forms of writing—blogs, Facebook, Twitter—all have precedents, analogue analogues: a notebook, a postcard, a jotting on the back of an envelope. They are exceedingly accessible. That it is easier to cultivate a wide audience for tossed off thoughts has meant a superfluity of mundane musings, to be sure. But it has also generated a democracy of ideas and quite a few rising stars, whose work we might never have been exposed to were we limited to conventional publishing channels."
---Viral marketing of the future: is it possible for 500 Days of Summer to live up to this video of Zooey Deschanel and Joseph Gordon-Levitt as Sid and Nancy?
---For Sociological Images, Dina Goldstein places Disney princesses in uncomfortably modern contexts.
---The exemplary House Next Door features an on-going conversation between Jason Bellamy and Ed Howard, this time about documentarian Errol Morris (of the amazing Gates of Heaven). I also liked Matthew Poland's discussion of the campy ("milkshake") ending of There Will Be Blood:
"It is the theatricality of the final scene—Plainview shuffling back-and-forth on a lane to maintain balance, Plainview bellowing “DRAINAGE!” as he froths saliva, Plainview hurling bowling balls at Eli as he madly lumbers toward him—that places it squarely in the category of camp. Anderson remains coolly detached with the camera, filming in the same crisp, classical style he uses in earlier scenes; consequently, we find ourselves at an aesthetic distance from the action. Sontag speaks about distinguishing "between naïve and deliberate Camp," i.e., inadvertent and self-aware camp. Innocent (and thereby effortless), the former provides the greater pleasure, she contends; the latter is too slick, too calculated to participate in naïve camp’s ebullience. TWBB’s finale, however, brilliantly upends her assertion. The scene is unabashedly outlandish, but whereas deliberate camp typically aims toward shallow parody, here the goal is more akin to alienation. The scene’s lunacy is secondary to its aesthetic function; camp defamiliarizes the film we thought we knew."
---As part of Cinema Styles' ongoing Ed Wood blogathon, Alexander Villalba examines how Tim Burton's problems with his Batman films may have led to the creation of Ed Wood.
---Times Online lines up "The 50 Best Movie Villains." The Hunter in Bambi? Also, the Times shows how tweens are taking over Hollywood.
---Andrew Sullivan found a pleasantly innovative music video by Sour.
---For Esquire, Francis Ford Coppola shares what he has learned: "The ending was clear and Michael has corrupted himself — it was over. So I didn't understand why they wanted to make another Godfather."
---Lastly, to prepare us for Julie & Julia, Laura Jacobs profiles Julia Child:
"For Julia’s first meal on French soil, Paul ordered sole meunière, that simplest, purest, most implicitly French preparation of fresh fish. All it required was butter, flour, parsley, lemon, precision, history, and heat. `It was heaven to eat,' Julia wrote in From Julia Child’s Kitchen—`a dining experience,' she remembered in My Life in France, `of a higher order than any I’d ever had before.' One could say it was another shaft of light, not angled upward as from a signal mirror, but piercing inward—an annunciation. `Paul and I floated out the door into the brilliant sunshine and cool air. Our first lunch together in France had been absolute perfection. It was the most exciting meal of my life.' Mrs. Child had received her vocation, her crown."
Labels: Julie and Julia Notable film and media links

I recently read the Esquire piece on Francis as well. I guess my question would be "if he didn't think it should be made, why did he make it?" It's kind of funny that he pushes the blame on someone else, when it is he who delivered the bad movie.
July 14, 2009 at 11:30 PM

The Film Doctor said…
I thought the quote had to do with making Godfather 2, in which case he made another masterpiece anyway. With The Godfather III, that painful concoction could have only been for the money.
July 15, 2009 at 8:38 PM