The Year 2003: Bill Murray and Scarlett Johansson in Lost in Translation 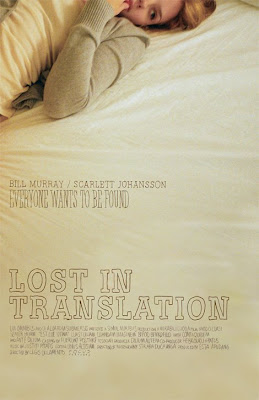 Ibetolis of Film for the Soul has once again graciously allowed me to review a film for his Counting Down the Zeroes celebration. For the year 2003, I chose Sofia Coppola's Lost in Translation. Here's the link.
And here's the post:
A mood piece of a movie, a study of urban alienation, jet lag, the disorienting effects of fame, and the amount of angst one can feel while staying at the luxury Shinjuju Park Hyatt Hotel in Tokyo, Lost in Translation (2003) earned Sofia Coppola an Oscar for her screenplay and the first nomination of an American woman as Best Director. The plot seems too simple. Film actor Bob Harris (Bill Murray) spends a few days in Tokyo earning 2 million dollars shilling Suntory whisky and getting to know recent Yale graduate Charlotte (Scarlett Johansson). He can’t sleep at night, so he whiles away much of his time in the hotel bar. His passive aggressive wife sends faxes reminding him that he has forgotten his son’s birthday. He feels trapped even amidst all of this luxury, a sensation that culminates in a scene where Japanese photographers endlessly shoot pictures of him as he holds a whisky glass by his face and grimaces in exasperation at the camera. The scene is both funny and poignant, although the viewer cannot feel too sorry for him, because he chose to sell out. The Hyatt Hotel has become a glittering luxury cage where nothing has any connection to who he is, and, thus, he feels lost.
Meanwhile, newly married Charlotte decides to tag along to Tokyo with her photographer husband John (Giovanni Ribisi). John keeps busy elswhere, so Charlotte listens to motivational tapes in their room, passively stares out at the Tokyo skyline, and smokes cigarettes. She majored in philosophy at Yale, but now she finds she can’t stand John’s superficial movie star friend Kelly (a hilarious Anna Faris), so she begins to see Bob (still lingering at the bar) as a possible ally. As the third major character in the film, Tokyo is freaky, jarring, and beautifully atmospheric in part thanks to the cinematography of Lance Acord. If the film ever threatens to grow too solemn, Coppola brings in a bizarre dancing talk show host (“Japan’s Johnny Carson”), or channel surfing TV images that include a much younger Bill Murray from Saturday Night Live, or mod Japanese teenagers playing video games as they posture like some distant reflection of American rebels. Some critics have claimed the film caricatures the Japanese, and it might, some, but I think Coppola balances her portrait of the impersonal cityscape with scenes of traditional Japan—a Buddhist monastery, a meditation garden, and flower-arranging. 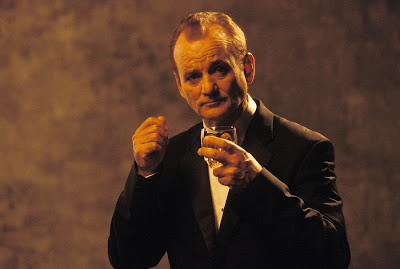 Murray is an inspired choice to play Bob, one of the few stars capable of conveying both the depth and the humor necessary for the part. Coppola reportedly left hundreds of messages on his answering machine to eventually cajole him into taking the role. When asked how she got Murray to join the production, Sofia answered “Perseverance.” In fact, in the “`Lost’ on Location” behind-the-scenes documentary on the DVD of Lost in Translation, Sofia shows every indication of being smitten with Murray, which perhaps encouraged his performance. In regards to Johansson, Coppola used much of her own tastes and interests to form her character. People have noted how Charlotte dresses much like Coppola with her restrained preppy chic sweaters, pants, and sneakers, and she also shares with Sofia an interest in photography and philosophy. After her unfortunate reception as a last-second replacement for Wynona Ryder in The Godfather III, Coppola spent a good portion of her young life not knowing what she would do, but she combined many of her interests (including music and writing) in her work as a director. Charlotte is in this sense a composite self-portrait of Sofia before she crystallized into the creator of this film. 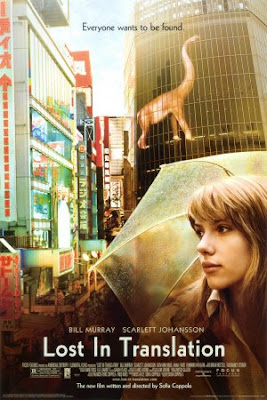 To get a sense of Sofia Coppola’s understated talent as a director, again one can learn from the behind the scene documentary about how she differs from the cliched image of a loud exasperated male director shouting his orders to his crew. Coppola is very calm on the set. One actor likened working with her as being in the quiet of a submarine. As she says, “I’m used to people not expecting much from me. But then as soon as I start working, that drops away. I don’t yell. I’m petite. I don’t turn into a tyrant. Being underestimated is, in a way, kind of an advantage, because people are usually pleasantly surprised as a result.” Sofia’s more intuitive, nuanced approach gives her actors the opportunity to blend the tragic, the alienated, and the comic, making some scenes so multivalent, they are hard to classify.
About a third of the way into the movie, during one evening in the hotel bar, Bob says to Charlotte, “Can you keep a secret? I’m trying to organize a prison break. I’m looking for, like, an accomplice. We have to first get out of this bar, then the hotel, then the city, and then the country. Are you in or you out?” Charlotte promptly replies “I’m in. I’ll go pack my stuff.” From that point on, they manage to forge a relationship that again defies any easy summary. Eventually more than friends, they find they cannot consummate their relationship, perhaps because sex would reduce it to the level of Bob’s one night stand with the bar singer with dyed red hair, or his encounter with the Premium Fantasy woman who enters his suite one evening to ask him to “lip” her stockings. Given the age difference between Bob and Charlotte, sex would become a mere symptom of his midlife crisis and her need for attention. Instead, during one night out with Charlotte’s Tokyo bohemian friends, Charlotte places her head on Bob’s shoulder in between karaoke songs as they both smoke.
Naturally, there are moments when Bob considers making a move on her, but he treats her much as he plays golf, with great restraint and artful deference. At another time, late at night after watching Fellini’s La Dolce Vita on the hotel television, Charlotte despairs when she says “I don’t know what I’m supposed to be.” Bob considers for a moment, and says “You’ll figure that out. The more you know who you are, and what you want, the less you let things upset you.” As they spend time together, these scenes of intimacy and understanding somehow invert the significance of all of the images of alienation. Charlotte and Bob make a connection that seems more substantial than their marriages. Faced with the return flight to the states and the likelihood of never seeing her again, Bob says to Charlotte, “I don’t want to leave,” and she replies “So don’t. Stay here with me. We’ll start a jazz band.” Thanks to Lost in Translation's improvisational alchemy, Charlotte’s suggestion sounds exactly right.
Labels: Lost in Translation

Joel Bocko said…
Well, I'm very glad to hear it. I think this is probably the best film of 2003, certainly one of the best and to my mind one of the two American masterpieces of seen in the 00s (the other being Mulholland Drive). Both films are quite controversial of course, and when this film came up in our discussion over Return of the King at Wonders in the Dark, it was quickly disparaged. I think it would've been a much better Oscar pick for that year myself.

The browser I'm on at the moment typically has difficulty with Film for the Soul for whatever reason. I will probably read the review next week - but will leave a comment over there when I do so. Look forward to the conversation too.
July 15, 2009 at 11:43 PM

The Film Doctor said…
Thanks, Movieman. I fully agree with you about Lost in Translation and Mulholland Drive being two of the best films of the 00s. Since you were having difficulty with viewing Film for the Soul, I copied the post here.
July 16, 2009 at 9:01 AM