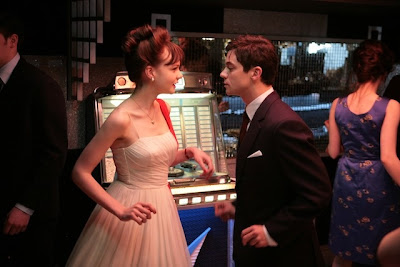 ---Newest sign of the apocalypse--the Royal Family has just joined Twitter.
---Alicia Silverstone and Alanis Morissette's new weepy road movie mock trailer--My Mother's Red Hat.
---The Elegant Variation interviews Joseph O'Neill, the author of perhaps the best novel of 2008--Netherland.
---For The Guardian, director Steven Soderbergh discusses how he's happy he's not still shooting Che.
---Movieman0283 of The Dancing Image compiles all of the influential film books of his Reading the Movies meme.
---Scott Macauley of Filmmaker Magazine looks carefully at the prospects of making a living as a film journalist:
"It's hard to know what to say to people who are intent on making film journalism their means of employment right now simply because most forms of journalism, particularly niche-content ones, are difficult to make a living at right now! In a time marked by increasing disintermediation in the content industry, the perhaps neurobiological lure of non-print forms of delivery, and expanded content offerings (games, social media, etc.) competing for a reader's finite amount of free time, anyone hoping to make a living by writing about things must figure out new ways of working and getting paid for that work. Like I said, this isn't just the province of niche-content creators. (Here's a list of some two dozen articles dealing with journalism and monetization just from the last three weeks.) But it seems to be hitting many niche-content creators the hardest because their audiences were smaller to begin with and their institutions less able to survive a sustained economic downturn."
---Meanwhile, Pradnya Joshi of NYT explores the ambiguities of bloggers sponsoring products for money:
". . . in many ways, the hypercommercialism of the Web is changing too quickly for consumers and regulators to keep up. Product placements are landing on so-called status updates on Facebook, companies are sponsoring messages on Twitter and bloggers are defining their own parameters of what constitutes independent work versus advertising."
---T.S. of Screen Savour takes on Fritz Lang's classic Metropolis (1927).
---The One-Line Review presents "The 50 Greatest Films," and Culture Snob finds it a bit "ossified" and "ordinary" (although he also made suggestions for the list).
---The Pipeline shows how to get shot by Scott Schuman for the influential Sartorialist.
---Check out Mary Ellen Mark's photographs of movie stars behind the scenes for Vanity Fair.
---Lastly, the Film Doctor' s instant trailer reactions: Under the Mountain looks terrible; An Education juxtaposes a life of scholarship with hedonism in Paris; we should all live like No Impact Man, but that doesn't stop the movie from appearing smug; and Drew Barrymore directs Ellen Page in Whip It.
Labels: Notable film and media links

One film that I was surprised you didn't mention was the Darwin film, CREATION (http://www.youtube.com/watch?v=BREvUKpZTeU). It is pretty interesting, but only because of the subject matter, really. There seems to be some sort of trailer formula that producers are using, and this is a good example of it. It reminded me of the AMELIA trailer, and AMELIA reminded me of the AUSTRALIA trailer, and, well, on it goes.
July 16, 2009 at 7:08 PM

The Film Doctor said…
Thanks for the recommendation, A. Villalba. I'm afraid I would spend much of the time thinking of Paul Bettany's role in Wimbledon while watching Creation. I like to think that Whip It and An Education might have virtues that their formulaic trailers gloss over. We don't know that the movies are fully generic, although Under the Mountain looks like franchise-wannabe dreck.
July 17, 2009 at 10:03 AM

T.S. said…
Thanks for this list, which I really do look forward to every week, and for the inclusion of my Metropolis review. But more important some of the other notes here.

-- The O'Neill interview is great. I've had Netherland on my shelf on loan from a colleague for many months now (too many, actually) and really hope to get to it soon. I'm toggling back and forth right now on first-time readings of White Noise (dated dreck) and Infinite Jest, for the Infinite Summer project.

-- I too think the 100 film list was bland and rather predictable, and that's coming from a guy who can be bland and rather predictable. The problem might be in a hesitation to vote for newer films out of fear of criticism, or out of fear that you're leaving off a beloved classic, but it inevitably gives the impression that they stopped making great movies in 1994. (Incidentally, I could come up with scores of films from the 1990s more worthy of inclusion than Pulp Fiction.) I like Culture Snob's personal list because it serves as a nice corrective to lists dominated by older films; but, ironically, there's an argument to be made that that list also gives the impression they didn't start making great movies until 1942 with Casablanca then resumed in 1958 with Vertigo.

-- I've got hopes for An Education, given Kris Tapley's assertion that it's the best film of the year so far. I like Nick Hornby, too, so I'll be interested in it for that reason. (Slightly on subject, I noticed a dog race in the trailer; my wife and I saw Away We Go last night, co-written by Dave Eggers, and it has a dog race as well. Is there some new fascination with dog racing by authors who are largely popular among the Gen X crowd?)

The Film Doctor said…
Thanks for your thoughts, T.S., but I beg to differ about White Noise. I think it is one of the best novels of the 1980s. I just taught it recently, and it holds up well.

T.S. said…
I'll definitely be interested to discuss White Noise in the autumn. As I said, my opinion of it is not very high right now but I'm also not finished so I'm holding out on an ultimate judgment until then. I suppose my main problem is that his critique of society seems rather jejune; certainly since this is my first time reading it and I wasn't reading authors quite like DeLillo in '85, my interpretation could just be skewed. It may also be that his observations have become rather institutionalized and thus no longer seem insightful. I'm just not sure, but something isn't sitting right with me. Infinite Jest is feeling breezy by comparison.
July 17, 2009 at 11:30 PM

To that I can only cite Woody Allen from Love and Death:

"That's jejune? You have the temerity to say that I'm talking to you out of jejunosity? I am one of the most june people in all of the Russias!"

By the by, David Foster Wallace would correspond with DeLillo when he needed assistance with his writing.
July 18, 2009 at 7:02 AM