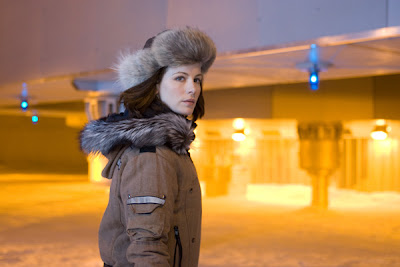 ---How do businesses and journalists adjust to the ongoing changes in the media? Disney plans on setting up a "subscription-based product." The New York Times might resort to "metering" and "membership strategies." According to Politico, Huffington Post gets much of its traffic from "entertainment and sex" and the "mainstream media" (which isn't surprising). Tina Brown of the not-yet-profitable Daily Beast has this to say to Phil Rosenthal of Chicago Tribune:
"We're in a transitional period that I think will only last another few years in which [journalists are] not paid the way they were. That's the scary part," she said. "If you're up to seeing the opportunity and recognize it as a transition, or you have enough put away to ride this wave, it's going to be fantastic. I think it's a big liberation of every kind of talent. . . . "
"People who decide, 'I'm going to wait around until [media are] fully transitioned and hope I don't get laid off,' " do so at their own peril, Brown said. "Obviously everyone has their responsibilities and has to make their own decisions. But as night follows day, things are really tipping, and it's better to have that training early rather than late."
---Meanwhile, at Conde Nast, ad page numbers have dropped precipitously, leaving magazine journalists "speculating, worried." Jeffrey Goldberg has some ironic recommendations about what they should do about it.
---I didn't know that Michael Jackson taught Fred Astaire how to moonwalk, or that they both danced out of "anger" (according to Astaire). The Self-Styled Siren found some oddly appropriate footage of Astaire "drunkenly" dancing and breaking glass in a bar.
---Michael Guillen of The Evening Class shares some fascinating vintage music videos.
---Intriguing new books--The Art of Harvey Kurtzman:the Mad Genius of Comics (because he helped invent Mad magazine), Alex Cox's X Films: True Confessions of a Radical Filmmaker, and the exceedingly timely Reinventing Cinema: Movies in the Age of Media Convergence by Chuck Tryon of Chutry Experiment.
---As much as I would like to make fun of Twitter, the social media tool does help small businesses promote themselves.
---Total Film lays out "The Story Behind American Psycho" (back when I used to like Christian Bale).
---Whiteout looks a little silly.
---While I had mixed feelings for Watchmen on DVD, I enjoy Alan Moore's distaste for contemporary films:
"I find film in its modern form to be quite bullying... It spoon-feeds us, which has the effect of watering down our collective cultural imagination. It is as if we are freshly hatched birds looking up with our mouths open waiting for Hollywood to feed us more regurgitated worms. The Watchmen film sounds like more regurgitated worms. I for one am sick of worms. Can't we get something else? Perhaps some takeout? Even Chinese worms would be a nice change."
---Allan Fish of Wonders in the Dark celebrates one of my favorite horror films--Don't Look Now.
---Lastly, Jim Emerson provides a thought-provoking analysis of the cranking speeds of Buster Keaton's Cops.
Labels: Notable film and media links

Ed Howard said…
That Whiteout trailer does look silly, I doubt I'll be seeing it. But -- and you may know this already -- it's based on a solid thriller comic written by Greg Rucka and drawn, in expressionistic, noirish black and (lots of) white, by Steve Lieber. Doesn't look like the film comes close to capturing its feel. What, is every comic going to be adapted into a movie eventually now?

As for Watchmen, I thought it was pretty good, with at least a few passages that were downright great. Moore has in general been very poorly treated by film adaptations of his work, so his comments certainly make sense, though. He's an ornery, funny guy, and I can hardly blame him for being sick of his complex, multilayered work being transformed into hack would-be blockbusters, as happened to League of Extraordinary Gentlemen, From Hell, and V For Vendetta. He doesn't even go to see them, and won't take any money for them, instead directing all movie profits to the artists on his books.
July 23, 2009 at 3:43 PM

Joel Bocko said…
I've been hoping for an erudite piece focused on Jackson's dancing, and here it is, although it's rather short. I disagree with one point: that his post-Thriller videos aren't as good. Imaginative as some of the concepts are in Thriller and Beat It - and despite the fact that they and Billie Jean (in its rather silly, if fun, uber-80s vernacular) showcase his dancing better than later work, an important point - these videos still belong to a less kinetic video era; only later in the 80s and especially in the 90s would the cutting truly catch up with the music.

Bad - with its electric camera movements, sharp editing, punchy use of lens and switches of angle - is Jackson's best video, and no wonder: it was directed by Martin Scorsese.
July 23, 2009 at 3:46 PM

Joel Bocko said…
But to be fair, Acocella's point is that with increasing sophistication, the fullness of Jackson's dance was lost, and this does seem to be true (in Bad, Scorsese's camera could even be regarded as a rival to Jackson's moves, though I think the pyrotechnics actually complement them and I get a fuller, richer sense of Jackson's movement from this video than from some of the other ones, oddly enough).

In that sense the "better" Jackson's videos were as a whole, the "worse" they may have been in the sense Acocella means. I think live performance footage is the place to go to for Jackson's genius more than his videos, at least if you want the undiluted form.
July 23, 2009 at 3:50 PM

The Film Doctor said…
No, I didn't know that about Whiteout, Ed. Thanks for the info. I like much of Kate Beckinsale's previous work.

I mostly liked the opening montage of Watchmen. The musical choices, the cartoonish treatment of Nixon, and the rip off of Dr. Strangelove tended to throw me out of the movie.

Thanks, Movieman. I agree that the concert footage gives one a better way to appreciate Jackson's dancing. I also like Smooth Criminal, amongst his later videos, and Scream.
July 24, 2009 at 11:33 AM