Stripmining the 80s: Adam Sandler in The Wedding Singer (1998) 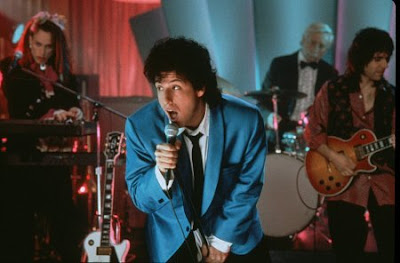 [To honor the release of Funny People this week, the Film Doctor dug up his first Adam Sandler review. For more discussion of Sandler's earlier movies, see Dawn Taylor's post in Cinematical.]
To each his own. The Wedding Singer specializes in fat jokes, vomit jokes, and especially lewd humor. For example, as Robbie the wedding singer (Sandler) gradually gets over getting jilted by his girlfriend on the altar, he discovers a plump young man, approximately 12 years old, who is sad because some girl just jilted him during a bar mitzvah. Robbie kindly arranges for Julia (Drew Barrymore) to dance with the young man, and wouldn't you know it, the kid gleefully gropes her on the rear. Then everyone else follows suit and gropes each other as they dance, young and old couples alike. What fun! Julia looks bug-eyed for a moment, and then laughs and goes along with the boy's lechery.
Welcome to the drunken gaudy world of The Wedding Singer, a kind of shotgun marriage between Dumb and Dumber, My Best Friend's Wedding, and America's Funniest Home Videos.
I confess I've never seen Adam Sandler before in anything, not having watched much of Saturday Night Live since it went downhill long ago. He comes off as a slacker blend of Seinfeld and Pauly Shore, constantly mumbling and slurring his lines with an (I guess) endearing incompetence. Late in the movie, he has to say "I love you" on a jet, and I seriously expected the jet to crash in reaction to the giant thud of his line reading. He can't sing either, but he can pout and yell out petulant lyrics of the J. Geils Band's "Love Stinks" humorously. His depressive rendition of Madonna's "Holiday" is masterful shtick. I kept expecting him to imitate Bill Murray's lounge lizard act up on stage with a microphone, but instead he quits singing at weddings early on in the plot--one act of mercy for the audience. 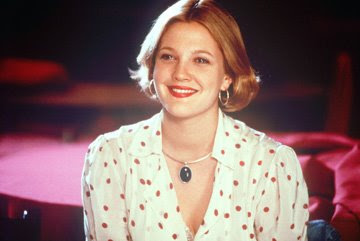 Meanwhile, Drew Barrymore carries much of the movie with her role as a plain-Jane waitress with a Swedish dairymaid bob. In the tradition of romantic comedy wallflowers, she gets better looking as the film goes on, gradually wearing more make-up as she decides between her brutish junk bonds cheating fiance and her (incomprehensible to me) dawning love for Robbie. You see, Robbie's not materialistic in the material girl age. He knows how to get good deals on wedding pictures, and he sings cute songs that he wrote about lost love. Basically, Barrymore plays an oddly innocent character more out of the 50s than the 80s, a kind of Doris Day type amongst Madonna wannabes, but at least she can act.
The movie makes constant references to 198os culture, most notably in the soundtrack (Flock of Seagulls, the Flying Lizards), but also in the Mtv-influenced fashion choices (Michael Jackson's white glove, Madonna's crucifixes, a Boy George lookalike). You also get to witness the arrival of CD players, New Coke, breakdancing, hip hop, Rubik's cubes, you name it. The jokes on the era are sometimes funny, but while other movies like Boogie Nights try to turn 70s nostalgia into something more, The Wedding Singer strip-mines a time when America had already begun cannibalizing the 50s, 60s, and 70s for some sense of youth-marketing-oriented generation identity. The film trades on our yearning for an earlier, more innocent age, but there's nothing innocent about mechanically exploiting our nostalgia throughout. Without the 80s gags, there would be painful little left over to watch--another romantic comedy intent on telegraphing every emotional curve.
Saddest of all, Billy Idol appears in a brief cameo to try to rejuvenate his career. Back then he was a "star," and now he's a cartoon, with grey washed out eyes and a jaded expression reminiscent of Aerosmith's lead singer Steven Tyler's recent look. He pretends that he hasn't changed since then, but he has, and his appearance turns him into a parody of his pretty punk Mtv persona.
Fate can scarcely be crueller to an aging rocker than to find him 13 years later appearing in such mainstream lowest-common-denominator comedic fodder as The Wedding Singer.
Labels: The Wedding Singer

Daniel said…
Funny that I just came across this on TV the other day. I actually hadn't seen it in years and I agree that the 80's references and soundtrack (a 2-disc set which I bought upon the film's release) are really what make it.

But I do admit that the conversation between Robbie and Glenn in the nightclub was great. Glenn is just such a complete sleazebag the whole time but it all comes out in that scene.
July 30, 2009 at 1:39 PM

The Film Doctor said…
Thanks, Daniel. Mainly what I remember is the bizarre sight of Billy Idol appearing on the plane at the end. It was almost as disturbing as watching Winona Ryder doom her career in Mr. Deeds (2002). Drew Barrymore has profited from her two movies with Sandler, at any rate.
July 30, 2009 at 5:34 PM

Stacey said…
As a Billy Idol fan...I have to say that his appearance in the "Wedding Singer" did actually help his career by gaining him a younger fan base. I credit this due to the popularity of cable tv running the movie quite often on weekends when the tween audience is watching. Not to mention the popularity of 80's nostagia in recent years. Yes, Idol didn't look the same in the movie as back in his heyday but if you look at him today he really has aged well. To each his own!
August 1, 2009 at 11:43 AM

The Film Doctor said…
Good points, Stacey. I'm a fan of Idol's earlier work too, so that's why I was appalled to see him appear in a cameo, looking all bleached out on a plane in an Adam Sandler film. As a piece of marketing, I'm not surprised that it worked in his career's favor.

In Funny People, Eminem shows up briefly, looking belligerent, and that was entertaining.
August 1, 2009 at 2:40 PM