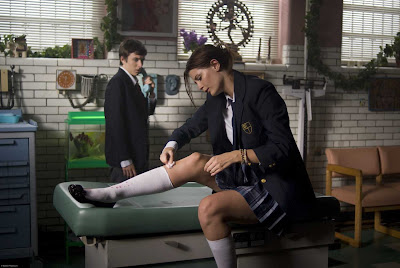 ---In fashion/film news, the NYT looks at vampire chic and io9 considers the awkward relationship between science fiction movies and fashion.
---One interesting thing about Twitter and blogs: Alice Hoffman tweets her rage at a critic, as Alain de Botton does the same in the comments section of a negative reviewer's blog. Both have shown regret since.
---Jim Emerson laments the decline in arguing as he illustrates his point with a fun Monty Python sketch.
---Andrew Sullivan is always impressive, so I enjoyed hearing his thoughts about blogging.
---Ashens brilliantly summarizes my reaction to Transformers: Revenge of the Fallen.
---Beth Accomando of NPR looks at the zombie pop culture phenomenon:
"Phil Luque, programmer for the San Diego Asian Film Festival Extreme, says zombies provide the ideal means of slipping social messages in under the radar."If you want to tell somebody, `I don't like you and I don't like the way you're running the government,' if I can tell it through a zombie movie, they're not going to care," Luque says. "It's just a zombie movie."Simon Pegg and Edgar Wright paid homage to Romero's socially conscious zombies in their 2004 film Shaun of the Dead."We wanted to keep that spirit ... to comment on consumerism," Pegg says. "And in Day of the Dead,on vivisection — and use them as a metaphor.""Zombies meant different things in different eras," says Wright, who co-wrote and directed Shaun of the Dead. "We always said our zombies are a metaphor for apathy. It's kind of like the great plague is laziness, so it was like the zombies represent sloth."
---Meanwhile, Rob Moffett provides us with the Zombocalypse Survival Kit.
---Of recent trailers, St Trinian's Girls looks iffy, Assassination of a High School President intrigues, and Deadgirl looks all ready for an extended dissection by Sociological Images.
---I think Public Enemies is likely to be one of the best films of the summer. To find out more, check out Michael Mann Week at Radiator Heaven, the "Essential Facts" in the MTV Movies Blog, S. T. VanAirsdale's Esquire discussion of how the film fits into "our culture's antibank blacklash," and Johnny Depp's thoughts on how his family background helped inspire his interest in Dillinger:
"My stepdad was an inspiration to me," Depp says in a hotel suite the morning after the film's premiere. "I knew about his past and I remember when I was growing up him referring to it as his `college years.'"When I got older and asked him what college he had attended, he said it was Statesville Prison. So for me to be able to get that much closer to him now, especially since he's passed on, was huge for me. He did what he did and I'm proud of him for doing what he had to do to survive. And he and my grandfather were great inspirations for me for Dillinger." Ever since he was a boy, Depp says, he's been fascinated by the Dillinger legend – partly because he was born in Owensborough, Ky., 250 kilometres from the Indiana farm where Dillinger lived as a teenager – but more significantly because Depp's grandfather and stepfather had also operated on the wrong side of the law."It has to do with my family and my upbringing," he explains. "My grandfather, who I was very close to as a kid, had run moonshine into dry counties, and my stepfather also had been a bit of a rogue and done burglaries and robberies ... there was some kind of inherent connection I had."
---For Slate, Farhad Manjoo examines "the allure of crowd-sourced, single-topic blogs."
---As a resident of South Carolina, I can only point to Jon Stewart's hilarious reaction to Governor Sanford's treatment of the media recently.
---Lastly, check out Mesai's clever animated short entitled Alarm (with thanks to /film).
Labels: Notable film and media links