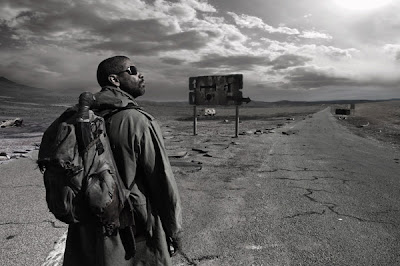 ---Humphrey Bogart says "I can't think of the goddamn line."--great classic Hollywood bloopers (with a tip of the hat to Nathaniel R).
---A. O. Scott affectionately revisits Mad Max.
---As the old media declines, we can watch Rolling Stone shrink, the Sunday newspaper disappear, and the end of traditional advertising. This transition will get bloody. Daniel Lyons of Newsweek thinks that "good Web sites shouldn't be free." David Simon proposes that The New York Times and The Washington Post could work together to set up a "paywall business model." Sharon Waxman has noticed a consensus among the "leaders of the digital media industry":
"-- The world of content is beginning to be divided into two parts -- the broad, `commoditized' stuff that you can find anywhere (celebrity shots, the bloggerhead in his pajamas commenting on events) and premium content that people will pay for.-- `You’re seeing the world split into a premium world, and a broader attentionally-monetized world,' said Miller.-- People will tolerate ads to get quality content they want to watch for free. (Hulu!)
And it’s not killing subscription competitors, says Iger. `There was a fear that a cord cutting was going on…because they are getting everything online and didn’t need it anymore.' They didn’t. Now Disney is considering a website that would charge a subscription fee."
---For The New York Review of Books, Michael Massing analyzes the larger media picture:

"For all these problems, the Web is currently home to all kinds of intriguing experiments. YouTube recently introduced a Reporters' Center offering tips from established reporters on how to cover international news. The Huffington Post has set up an investigative fund to support journalistic research. The Boston-based GlobalPost has arranged with dozens of independent reporters around the world to find outlets for their work. Sites like Minn Post in Minneapolis and Voice of San Diego are testing whether metro reporting can be done on the Internet. Among the more notable recent developments are the sharply edited book section at The Daily Beast; the brisk video-debate unit Bloggingheads.tv; and the conservative blogging collective NewMajority.com, set up by David Frum after he broke with National Review.

Taken together, such initiatives suggest a fundamental change taking place in the world of news. As the Pew Project for Journalistic Excellence put it in its 2009 "State of the News Media" report:

Power is shifting to the individual journalist and away, by degrees, from journalistic institutions.... Through search, e-mail, blogs, social media and more, consumers are gravitating to the work of individual writers and voices, and away somewhat from institutional brand. Journalists who have left legacy news organizations are attracting funding to create their own websites.... Experiments like GlobalPost are testing whether individual journalists can become independent contractors offering reporting to various sites, in much the way photographers have operated for years at magazines.

In a much-circulated essay, Clay Shirky, an Internet consultant and professor at NYU's Interactive Telecommunications Program, compares the current turbulence in the news business to the disorder brought about by the invention of the printing press, when old forms of transmitting information were breaking down and new ones had yet to cohere—a transition accompanied by much confusion and uncertainty. The historical analogy can be taken a step further: just as the advent of printing helped break the medieval Church's hold on the flow of information, so is the rise of the Internet loosening the grip of the corporate-owned mass media. A profound if unsettling process of decentralization and democratization is taking place.

Needless to say, traditional news organizations continue to play a critical part in keeping the public informed. But can they adapt to the rapidly changing news environment? And who is going to pay for quality news and information in the future?"

---Meanwhile, Matt Bors takes on the future of news, and David Horsey notes how "The Daily Planet is being sold to Lex Luthor."

---A study finds that "Americans watch screens 8.5 hours a day."