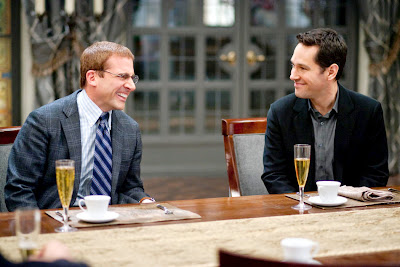 Talk about cognitive dissonance. Dinner for Schmucks has everything not going for it. I normally cannot stand geek/nerd movies because they contribute to a rampant devolutionary trend that needs no reinforcement. Haven't we had enough films glorifying losers to satisfy the immature male demographic?
Armed with these prejudices and more, I went to see Dinner for Schmucks and found that I . . . liked it. I was confounded. The reaction made no sense. I couldn't stand the trailer, with Steve Carell as Barry mugging and bulging his eyes with a buck-toothed grin. He plays a geek who expresses himself by mounting stuffed mice in various cutesy dioramas, i.e. a mouse couple sunbathing, another flying in a ballon. Some are based on archetypal paintings--The Last Supper, Whistler's Mother, The Scream, etc. Over time, we learn that there's a romantic wistfulness to these tableaus that reflects how Barry's IRS boss Therman (Zach Galifianakis) stole his wife.
The plot of Dinner with Schmucks (adapted from the French film The Dinner Game) concerns several business executives who like to compete with each other in bringing the biggest idiot to a dinner for the group's amusement. Seeking advancement to the level of these executives, analyst Tim (Paul Rudd) agrees to find a moron for that purpose, but his girlfriend and possible fiancee Julie (Stephanie Szostack) does not approve. Once Tim allows Barry into his life because he would make a perfect guest for the dinner, Barry keeps accidentally sabotaging Tim's romantic and professional concerns much as Katherine Hepburn's character did to Cary Grant's in Bringing Up Baby. Instead of a leopard, however, Dinner for Schmucks features the "wild" artist Kieran (Jemaine Clement of The Flight of the Conchords) who threatens to steal Julie away from Tim. Kieran likes to wear hooves and photograph himself growling, romping around with nymphs, and eating an octopus. Barry also accidentally invites Tim's long-term stalker Darla (Lucy Punch) into his apartment, so she ends up posing another threat to Tim's relationship with Julie.
Why does the film succeed? For five reasons:
1) Rudd has played straight man to Carell's goofball before in The 40 Year Old Virgin, and their comic timing has improved. I still find the increasingly omnipresent Zach Galifianakis funny, and the film is sweetly written by David Guion and Michael Handelman and ably directed by Jay Roach. 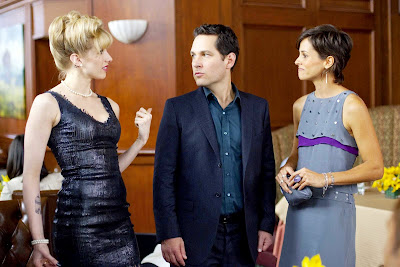 2) Dinner succeeds by playing with the viewer's prejudices about idiots. Instead of just having the audience laugh at Barry, the film stresses the monstrousness of the executives who need ridiculous people around to laugh at, thereby establishing an odd tension in the humor. At one point, Barry points out to Tim that "Sometimes I think you think that I'm an idiot," and the comment draws him up short. Even the arrival of the pitiable stalker Laura humanizes her. When she gets angry, she tells Tim that "Some day I'm really going to leave you!," and the insertion of her point of view is not only funny but poignant. By the time events build (as in The Thin Man) to the dinner itself, the audience does not know where to place its allegiances--behind the suave executives or the more endearing idiots? Thus, the audience is obliged to go through some of the same soul-searching as Tim.
3.) Dinner even flirts with the possibility that Barry has got some sort of wisdom in his idiocy by playing the Beatles' "The Fool on the Hill" in the soundtrack and by having Barry stand in the edge of a pond in a manner reminiscent of the scene where Chance walks on the water in Being There (1979). However, Barry most emphatically does not walk on the water, and I think Jay Roach was smart not to take things too far in that holy fool direction. Instead, in many ways, Barry remains an overbearing, intrusive creep in the same vein as many of Jerry Lewis' comic creations. The balance in Barry's characterization is critical for the success of the film.
4) Schmucks calls attention to the soul-killing insanity of Tim jockeying for position in the corporate hierarchy by providing a parallel subplot involving Therman's hold over Barry at the IRS. Therman practices a form of mind control that proves very effective over Barry, obliging him to freeze up and confess his inability to find his wife's clitoris because he thinks she lost it in her purse. The whole scene mocks the power a boss holds over an underling, a form of hypnosis that has doubtless gotten stronger with the recent mass drop in employment.
5) Ultimately, for Tim especially, Dinner for Schmucks is a comedy about the difficulty of being genuine, and the dangers of judging others, even if they happen to be comically unself-aware. By intelligently depicting stupidity, the movie disarms even this critic, who still cannot fully understand why he likes it.
Labels: Dinner for Schmucks