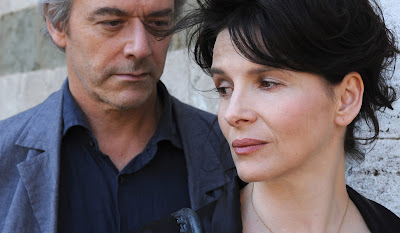 ---one masculine reaction to Eat, Pray, Love
---world, girl, repeat
---the films of Nash Edgerton
---Peggy Nelson's thoughts on the etiquette of the flow:
"We’re beginning to inhabit ad hoc, overlapping, always-on virtual salons — you’re talking to someone, and then you both get pulled off into different directions, to form different shapes and vectors within the conversations, and then come together again, having never really been apart. You can even have multiple conversations via multiple media with the same person in the same span of time. Single conversations are one-dimensional chess; our language games have increased in complexity. And, potentially, in reward. Because with its ability to feel distant stories in a more personal manner, the expanded self points a way towards those stories becoming more relevant, and perhaps more actionable.
How might this apply to storytelling? It does not necessarily mean that every story must be, or will become, hopelessly fragmented, or that a game mentality can or should replace analysis. It does mean that everyone is potentially a participant in the conversation, instead of just an audience member or consumer at the receiving end. I think the shift in perspective from point to connection enables a wider and more participatory storytelling environment, rather than dictating the shape of stories that flow in the spaces.

Some of those stories include the Enough Fear campaign, which exploited the phone’s potential to collapse global distance by setting up phones near the Boston Common, connected to phones in Iran. Passers-by could chat for a few minutes about politics or whatever they wished.

Then there is the “backchannel,” or what Jay Rosen calls by the somewhat unwieldy name of “audience atomization overcome.” Common at conferences but not limited to those venues, backchannels are text-based chat streams used to discuss, argue with, or otherwise engage the current talk or event as it occurs. It is a way for members of the audience to host a rapid-fire prototyping of the ideas presented. Twitter is the backchannel medium of the moment, although different technologies have served that purpose in the past. Thanks to Twitter backchannels identified by hashtags, I was able to participate with friends and audience members at some talks at SXSW this past year, despite being unable to attend in person."

---our lives are reality shows

---Clive Thompson on no growth economics:

"But for all the troubling questions it raises, there's one thing you can say about steady-state thinking: It is almost cosmically ambitious. Given how numb and static the world's economic arguments have become, no-growth theory is a rare beast: a vision of social change that is genuinely radical, almost jaw-droppingly so. Even talking about such ideas, Victor admits in his book, "could make a politician unelectable." The no-growthers regard their job not as promoting specific policies, but widening the field of debate. "I want to make it possible just to start to think about growth and its role in economic thought," Victor told me.
Is the world ready, or even interested, in such unorthodox ideas? The new crop of books hasn't provoked the sort of backlash that Limits once did. Jackson suspects that climate change may have made us more receptive. As he's traveled around giving talks on his book, some politicians and businessmen have grudgingly admitted that hyping growth has created real problems—even if they can't quite endorse the solutions. "The response often is that my logic is faultless," Jackson told me, "but the policy recommendations are bonkers." He also suspects no-growth theory is still so marginal that it hasn't attracted much attention—no best-sellers this time—but should it gain political momentum, the attacks will come.
Daly, who's been arguing his case for four decades, has begun to think that only the Earth itself will compel people to act. In a few decades, if basic resources become scarce, prices spike, and climate change is causing global conflict, no-growth thinking could arrive whether we like it or not. "It'll be forced on us," he says. In the end, when it comes to determining the shape of our economy, the planet may possess the most powerful invisible hand of all."

---the Caravaggio and the Lady Gaga effect

---@CraigatPorlock proves that Jon Turteltaub is the new David Lean without even seeing The Sorcerer's Apprentice (which strikes me as the best way).
---@CoolerCinema deconstructs Salt
---amongst recent trailers, Certified Copy seems to be pretentious, but Tamara Drewe, Sucker Punch, Priest, and The Company Men all look intriguing.
---Razzle Dazzle, Pt. 5: The Maverick
---Joseph Gordon Levitt gets mean
---"Because we are visual":
Die Zeit: “Do you concern yourself with new media and technology?”
Jean-Luc Godard: “I try to keep up. But people make films on the Internet to show that they exist, not in order to see something."
---lastly, Jane Austen's Fight Club and the evil that women do
Labels: Notable film and media links

Craig said…
Thanks for the shout-out. I really enjoy the variety of links on these lists, e.g., combining Jane Austen Fight Club with a serious and provocative article on "femenism." Good stuff, Film Doc.
July 29, 2010 at 8:36 PM