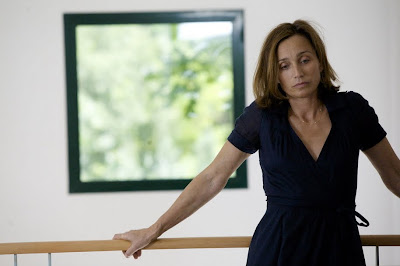 ---Charlize Theron killing ninjas
---CityLights interview with Pauline Kael
---Cary Grant's LSD phase
---extend and pretend (thanks to @stevensantos) and ghost malls
---Charles Simic's "Last Words":
—“What time is it? I wish you’d hurry up, I want to get to hell in time for dinner.” (John Owens ( Bill Booth), executed for murder in Wyoming on March 5, 1886).
—“I would rather be standing here for the crime that so help me God, I never remember committing, than to be sitting down there eagerly waiting to see a man die.” (Edward J. Brislane, executed in Illinois for murder on February 11, 1921).

—“Don’t worry about me. I’m okay. They are not shooting me for deserting the United States Army—thousands of guys have done that. They’re shooting me for bread I stole when I was 12 years old.” (Edward Donald “Eddie” Slovik,” convicted of desertion in northeastern France and executed on January 31, 1945.)

—“When I die, bury me deep, lay two speakers at my feet, put some headphones on my head and rock and roll me when I’m dead.” (Douglas Roberts, convicted of kidnapping, robbery and murder in Texas and executed on April 20, 2005.)
---"I'm not here to make friends"
---are cameras the new guns?
---Michael Joshua Rowin discusses the last word of Synechdoche, New York:
"A few moments later Weems will tell Caden: “ . . . as you recognize your transience; as you begin to lose your characteristics one by one; as you learn there is no-one watching you, and there never was . . . “ The self is no longer attached to a body, a vision, a maker, a voice. It is free-floating, endlessly malleable and adaptable. And if Caden ultimately adheres to orders issued from a voice, it is because he still cannot let go of his stubborn self. Until the bitter end he is still thinking of new ways to “do the play now,” right up to the point when Weems must direct him to die and force him to give his self over to the most dramatic of identity-blurring transformations: death. Thus Synecdoche is on the surface the most hopeless of Kaufman’s films while underneath the most forward-looking. Where the Kaufman of Adaptation unsuccessfully attempts to relinquish his ego in order to capture the universe—only to more forcefully reestablish his own personality—Caden comes closer to enlightened knowledge, to the acceptance that giving up the assertive, directorial ego and walking empathetically in others’ shoes (rather than controlling them) is the best way to give the world its due. That Caden still needs a guide to do so, and that he can only partially let go, is what makes Synecdoche such a painful, difficult film. While lauded and loved in many corners, one wonders if Synecdoche was so ambivalently met by critics and brutally received at the box office not because of its supposedly unrelenting despair or exceedingly demanding form, but because of its challenges to the very foundation and stability of identity. For viewers so tightly clinging to the false security of self, Weems’s final voiceover—“Die”—is not meant for Caden alone."
---fast food ads
---"We are creatures of the grid"
---ecology of mind:
"In the race for economic expansion we depleted oil reserves, pulped ancient forests and pumped water until the wells ran dry. Now we’re depleting the “old growth culture” – sucking dry the history, mythology, music, art and ideas that previous generations have bequeathed to us. All of our past is being picked over, recycled, remixed, regurgitated and repurposed.
Jaron Lanier, the father of “virtual reality,” is perhaps the most respected and outspoken technologist to identify a troubling deficiency in our cultural health. In You Are Not a Gadget: A Manifesto, Lanier writes that our culture has become one of nostalgic remixing where authentic “first-order expression” is chopped up and mashed into a derivative piece of “second-order expression.” And although Lanier shies away from proposing an infallible metric for distinguishing between the two, he does suggest that what distinguishes first-order expression is that it contributes something “genuinely new [to] the world” whereas derivative works recycle, repeat and fail to innovate.
The result is a society that treats our cultural heritage as a resource for exploitation. Instead of producing new works of genuine art that replenish our mental environment, we celebrate the amateur whose mash-ups may be hilarious but contribute nothing of value to the cultural conversation. This situation becomes especially distressing when we consider that just as there is a finite amount of nutrients in our soil, there is a finite amount of creativity that the past can yield. Great art is rare, and only so many mash-ups can be released before the original power of a truly artistic creation is lost. And without the production of an authentic culture, our mental environment is in danger of becoming a clear-cut wasteland, over-farmed and depleted.
In Lanier’s words, “we face a situation in which culture is effectively eating its own seed stock.”
---Wright's 10 coolest movie moments
---the flooded earth
---Kristin Scott Thomas moves to France 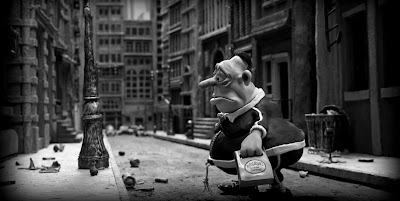 ---Mary & Max trailer (thanks to @aliarikan)
---Nathaniel's audience with Julianne Moore
---the elusive Bill Murray:
''He has a genuine outré gift: he makes you feel that his characters are bums inside — unconcerned and indifferent — and he makes that seem like a kind of grace,'' wrote New Yorker film critic Pauline Kael about his performance in 1984's Ghostbusters.
---the evils of air conditioning
---continuing the "Razzle Dazzle" series: "The Fraud"
---lastly, Dennis Cozallio celebrates Nashville at 35
Labels: Notable film and media links